If approved, the oil ban would be the EU's strongest move yet against Russia's strategic energy sector that helps the Kremlin finance its war, but will still not touch its huge gas exports 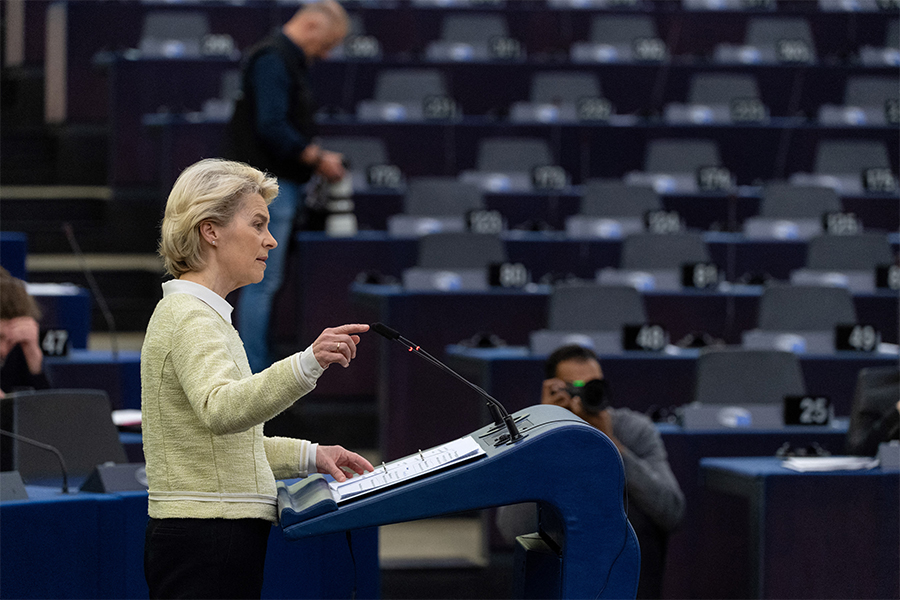 European Commission President Ursula von der Leyen speaks during a debate regarding economic sanctions against Russia, during a plenary session at the European Parliament in Strasbourg, eastern France, on May 4, 2022.​ (Credits: PATRICK HERTZOG / AFP)

Zaporizhzhia, Ukraine: The European Commission on Wednesday proposed a ban within the year on Russian oil imports in its toughest move yet over the invasion of Ukraine, as Moscow said it was offering a new ceasefire to evacuate a steel plant in devastated Mariupol.
The EU also pledged to "significantly increase" its support for Ukraine's neighbour Moldova, which has seen a series of attacks in a Moscow-backed separatist region, sparking fears the conflict could spread.
European Commission chief Ursula von der Leyen said the bloc would "phase out Russian supply of crude oil within six months, and refined products by the end of the year".
If approved, the oil ban would be the EU's strongest move yet against Russia's strategic energy sector that helps the Kremlin finance its war, but will still not touch its huge gas exports.

But within hours, Hungary— whose populist leader Viktor Orban is one of Putin's few EU partners—said it could not support the plan "in this form", as it would "completely destroy" the security of its energy supply.
Ukrainian Foreign Minister Dmytro Kuleba hit back that EU countries blocking an oil embargo would be "complicit" in Russia's crimes in Ukraine.
The EU is also mulling moves against Russia's biggest bank, Sberbank, and against Patriarch Kirill, the head of the Russian Orthodox Church and an outspoken promoter of Putin.
Ukraine's allies have sent money and, increasingly, heavy weapons to Kyiv to help it defend itself in a war US President Joe Biden has framed as a historic battle for democracy.
Biden said Wednesday he was "open" to imposing more sanctions on Russia and would be discussing measures with allies from the Group of Seven democracies in the coming days.

After failing to sack Kyiv, Russia's more than two-month military campaign has shifted to seeking to unite separatist pro-Russian areas in the east with Crimea, which Moscow seized in 2014.
The strategic southern port of Mariupol has become an emblem of the suffering of the war, with an untold number of dead and basic supplies cut off as Moscow carried out a scorched-earth campaign to wrest control.
The last Ukrainian soldiers are holding out at the Azovstal steelworks where Mariupol's mayor, Vadym Boichenko, said there was heavy fighting Wednesday.
Russia was attacking with heavy artillery, tanks, planes and ships off the coast, he told Ukrainian television.
"There are local residents there, civilians—hundreds of them there," he added. "There are children waiting for rescue. There are more than 30 kids."
Russia's defence ministry announced a daytime ceasefire for three days beginning Thursday to evacuate civilians from the plant.
In Washington, State Department spokesman Ned Price voiced scepticism about the ceasefire, saying that Moscow has repeatedly resumed shelling after announcing pauses.
Price called on Russia to show that the latest effort is "motivated by genuine humanitarian concern and not the desire on the part of the Russian Federation to achieve a PR victory".
Denys Prokopenko, the commander of the nationalist Azov regiment, vowed never to surrender the plant.
"The situation is extremely hard. However, we will continue carrying out the order to keep up our defences no matter what," he said in a video.

'We thought everyone forgot'

Some 344 people have been evacuated in two rounds from Mariupol and surrounding areas and brought to Ukrainian-controlled Zoporizhzhia, President Volodymyr Zelensky said.
"They will all receive the necessary help, they will all receive the most attentive care from the government," Zelensky said in a video address.
The civilians, some only with the clothes on their backs, arrived in a caravan of white buses organised by the United Nations and Red Cross.
"We are so thankful for everyone who helped us," evacuee Anna Zaitseva said, holding her six-month-old baby in her arms. "There was a moment we lost hope, we thought everyone forgot about us."
Apart from the steelworks, Mariupol was now largely calm, AFP journalists observed during a recent press tour organised by Russian forces. Remaining locals were emerging from hiding to a ruined city.
Ukraine's military intelligence accused Russia of planning to hold a parade in Mariupol on May 9 to celebrate victory over the Nazis in World War II.
In a briefing on the army's plan for May 9, Russian Defence Minister Sergei Shoigu made no mention of a celebratory march in Mariupol.
In the eastern Lugansk region, meanwhile, governor Sergiy Gaiday said two people had died in the past day and that there was "no safe place".

Attacks in the west

Russian attacks periodically stray close to Ukraine's western border with the EU.
Both sides on Wednesday reported Russian strikes on infrastructure sites around the western city of Lviv, near Poland, and Transcarpathia, a region bordering Hungary.
Russia's defence ministry said Wednesday that its air- and sea-based weapons had destroyed six electrical substations near railways including around Lviv, near Odessa to the south and near Dnipropetrovsk to the southeast.
It said Ukrainian troops in the eastern Donbas region had used the railway stations to transport weapons and ammunition from the West.
In Ukraine's western neighbour Moldova, there are fears the conflict will spill over the border.
Visiting the tiny ex-Soviet republic Wednesday, European Council President Charles Michel offered the EU's "full solidarity" and support, including in the areas of logistics and cyber defence.
"This year we plan to significantly increase our support to Moldova by providing its armed forces with additional military equipment," he told a press conference with President Maia Sandu.
Ukraine has accused Russia of wanting to destabilise Moldova's separatist region of Transnistria to create a pretext for a military intervention.
The war in Ukraine has killed thousands of people and displaced more than 13 million, creating the worst refugee crisis in Europe since World War II.
By Joshua Melvin with Alex Pigman in Brussels
© Agence France-Presse

Tweets by @forbesindia
How Tata Consumer Products grew despite the pandemic
Are we looking at a crypto brain-drain?