Among 53 countries facing the problem, the most affected include the Democratic Republic of Congo, Ethiopia, Yemen and Afghanistan where millions face hunger after the country plunged into financial crisis following the Taliban takeover in 2021. Experts now warn Russia's war could lead to a famine 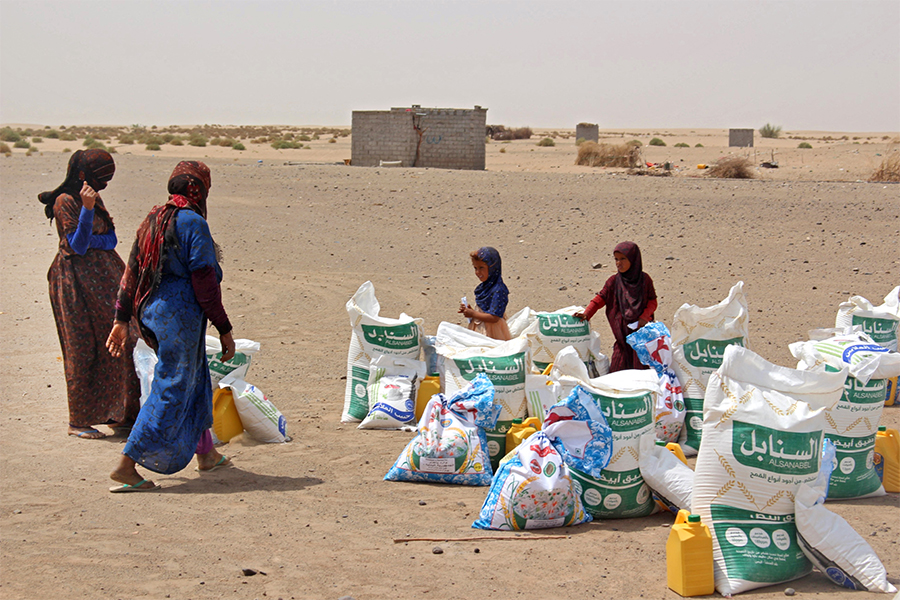 Yemeni families receive flour rations and other basic food supplies from charitiesin the province of Lahj, in southern Yemen, as food prices have doubled since last year and the fact that Ukraine supplies nearly a third of Yemen's wheat imports has heightened fears of a deepening famine. The disruption in export flows resulting from Russia's invasion and international sanctions has spurred fears of a global hunger crisis. (Credit: Saleh Al-OBEIDI / AFP)

Paris, France: The number of people facing hunger rose to 193 million last year as conflict, climate change and economic crises ravaged people's livelihoods, the UN's Food and Agriculture Organization said Wednesday.
While experts have warned that Russia's war in Ukraine could cause famine, the FAO said in an annual report that nearly 40 million more people were pushed into "acute food insecurity" in 2021.
Among 53 countries facing the problem, the most affected include the Democratic Republic of Congo, Ethiopia, Yemen and Afghanistan where millions face hunger after the country plunged into financial crisis following the Taliban takeover in 2021.
The United Nations defines "acute food insecurity" as when a person's inability to consume adequate food puts their lives or livelihoods in immediate danger.

"This is hunger that threatens to slide into famine and cause widespread death," the FAO said.
The number has risen constantly since the first report was published by the FAO, the World Food Programme and the European Union in 2016.
The increase in 2021 has been "driven by a toxic triple combination of conflict, weather extremes and economic shocks", with people affected in 53 countries, the FAO said.
Although the report does not take into account the conflict in Ukraine, the FAO said the war "stands to have the most devastating impacts on food crisis countries and on those on the brink of famine".
Russia and Ukraine are major exporters of essential agricultural products, ranging from wheat and sunflower oil to fertiliser, and the FAO has previously said the conflict sent world food prices to an all-time high in March.
"The war has already highlighted the interconnected nature and fragility of global food systems," the FAO said.

The agency noted that several countries battling major food crises obtained almost all of their wheat imports from Russia and Ukraine last year, including Somalia, the Democratic Republic of Congo and Madagascar.
The FAO warned that the "outlook moving forward is not good".
"Today, if more is not done to support rural communities, the scale of the devastation in terms of hunger and lost livelihoods will be appalling," the report said.
"Urgent humanitarian action is needed on a massive scale to prevent that from happening," it said.
In 2021, conflict and insecurity was the main driver of acute hunger in 24 countries, affecting 139 million people.
Economic "shocks", worsened by the impact of Covid, hit 30.2 million people in 21 countries.
Extreme weather was the main driver of acute food insecurity for 23.5 million people in eight African countries.
The FAO said it needs $1.5 billion to stabilise and increase local food production in at-risk regions where planting season is starting.
"There is no time to waste," it said as it meets on the issue on Wednesday.
© Agence France-Presse