The Plated Project: Fighting hunger, one plate at a time

Founded by Chitresh Sinha in 2019, The Plated Project is a business that strives to solve the hunger crisis in India 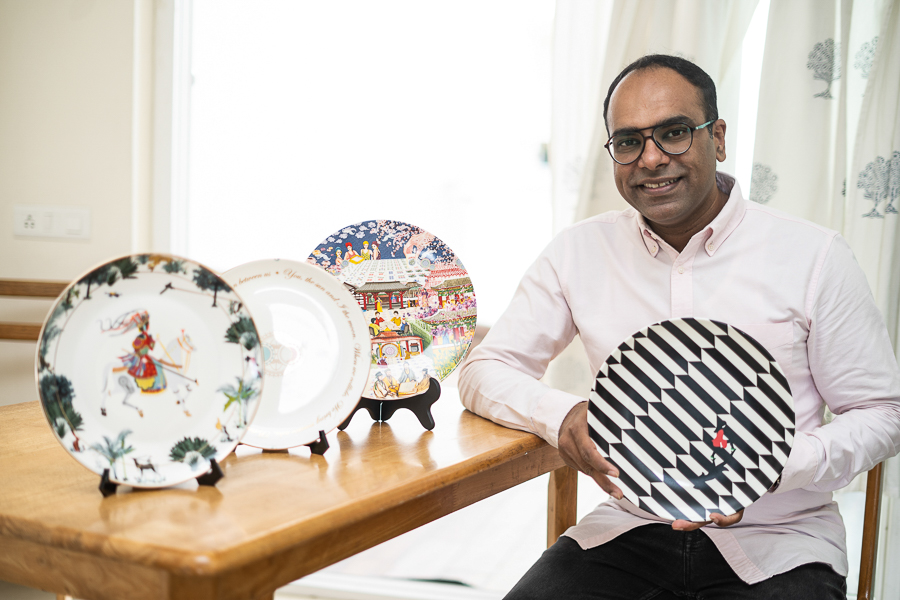 In the initial days of the Covid-19 pandemic, an idea was taking shape in Chitresh Sinha’s mind; an idea that could make money, while taking small steps in solving the country’s hunger crisis. Sinha wanted to solve the problem of hunger creatively. Little did he know that his idea, designed to be an experiment, will become an independent, stand-alone impact business in the following four months.

Working as a brand strategist and consultant at Chlorophyll Brand & Communications Consultancy, after pursuing a degree in engineering and an MBA, Sinha, 38, started The Plated Project as a digital, direct-to-consumer business to sell decorative plates.

An ad on Instagram is how it all began. Sinha was scrolling through Instagram, and chanced upon an ad that said, ‘Hunger kills more people each year than Aids, malaria and terrorism combined’ (which stands true, as per UN’s World Food Programme). To Sinha, this was hard-hitting. After doing some research, he found that about 82 percent of hungry people live in countries with food surpluses, not food shortages.

With a mission to raise funds and awareness to end hunger, Sinha started brainstorming on creative ways to make an impact. In one such brainstorming session, along with a few friends who are now part of The Plated Project team, an idea struck—‘Buy a plate, fill a plate’—and thus began the journey of using art to address hunger.

The Plated Project, which began with three people, now has a team of 12 full-time members, and five consultants. Apart from founder Sinha, the core team comprises Dhruvi Shah, who started as an intern and now leads design and art curation; Kapil Goswami, head of operations; and Shonali Neg, business head. The project came alive under the mentorship of brand consultant and author, Kiran Khalap.

Amid the Covid-19 lockdowns, the homes of the founder and core team members became work-places. While all the paperwork took place at Sinha’s house, art sampling, inventory, and dispatch took place at the homes of other team members. “Kapil’s home served as the warehouse where all inventory was stored and dispatched. After the first six months, his parents actually complained to me (via him) that there’s no place left at home for the humans,” recalls Sinha.

What goes on at The Plated Project?

Each month, the team comes up with a theme around a specific social issue, based on inputs and advice from people associated with social initiatives. A group of 100 artists from India, as well as from countries like Norway, Poland and the US, have collaborated with the project. Each month, they craft artistic plates to spark conversations around the chosen social issue. These plates are then sold on the project’s website and via its social media handles. Each sale makes a tangible impact by sponsoring meals for the needy.

The founder recalls the first series that the project did, called ‘A quarter of nostalgia’, in collaboration with pastry chef Pooja Dhingra. Based on the insight that one in four kids in Indian cities is malnourished, the idea was to cover three quarters of a plate with happy childhood memories, and leave one quarter blank, depicting that it is difficult to create happy memories on an empty stomach. 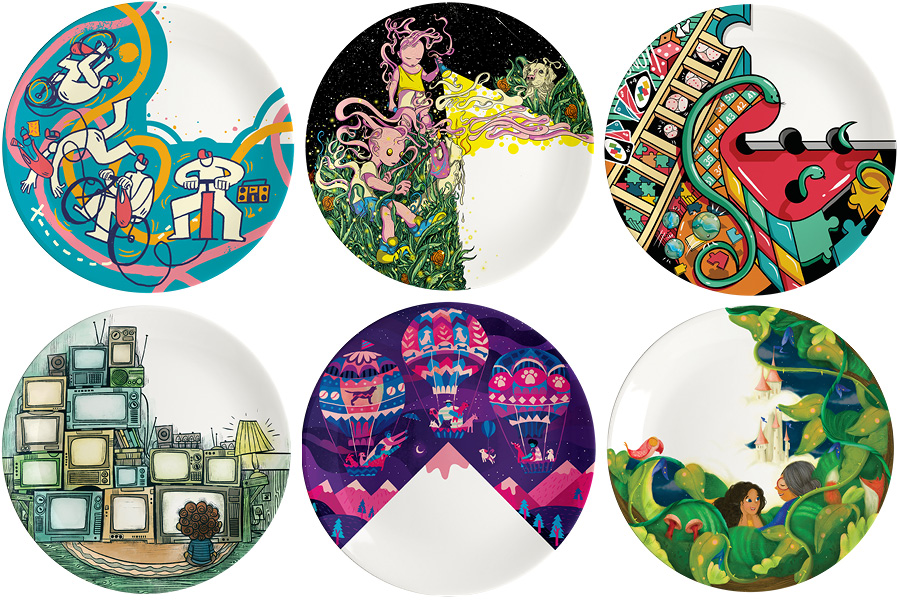 ‘A quarter of nostalgia’—The Plated Project's first series, in collaboration with six artists depicting a childhood memory on 3/4th of the plate, leaving 1/4th empty, to showcase the difficulty of creating happy memories on an empty stomach. The idea was based on the insight that 1 in 4 children in Indian cities are malnourished. Image: The Plated Project

Till date, The Plated Project has sponsored over 5,20,000 meals. “During the first lockdown, we sponsored over 1,50,000 meals in one month alone. During the course, we’ve helped the artisan community, helped sponsor education for girls, helped the transgender community, people with Down syndrome, daughters of sex workers and more. We route our funds via credible partners such as GiveIndia and Feeding India, among others,” says Sinha.

The Plated Project team is very clear as to why they’ve chosen art to solve the problem of hunger. They believe “art destroys boundaries, art starts conversations, and art makes the little moments in life so much more joyful”. “Our platform is by-invitation-only for artists, so we take our curation very seriously. We curate artists on an on-going basis, focusing on the quality of art and not the artist’s profile. It’s important for us to identify work that has a distinct style and can tell emotionally engaging stories,” says Sinha. Each artist is paid a share of the revenue from the sale of their work or is commissioned by the project to create exclusive work for them. “The artists feel really happy engaging with us because they get to have a tangible social impact, while making money.”

Aashti Miller, a 28-year-old architect working with Pickard Chilton, an architectural firm in the US, has been associated with The Plated Project since May 2020. “The Plated Project reached out to me on Instagram. These were early days for my work as well as theirs. They were excited to see how I could merge my background in architecture with my interest in design,” recalls Miller. Having done two designs for the project—Living Windows and Midnight Lights—Miller has a few other collaborations coming up with the project, and says she would love to be associated with the project for as long as possible. “I have always loved the idea behind The Plated Project; it's the one initiative I have found that is equally helpful to the artist, the consumer, the art world in general, and people in need. It's still thrilling for me to see my work on so many people's walls.” 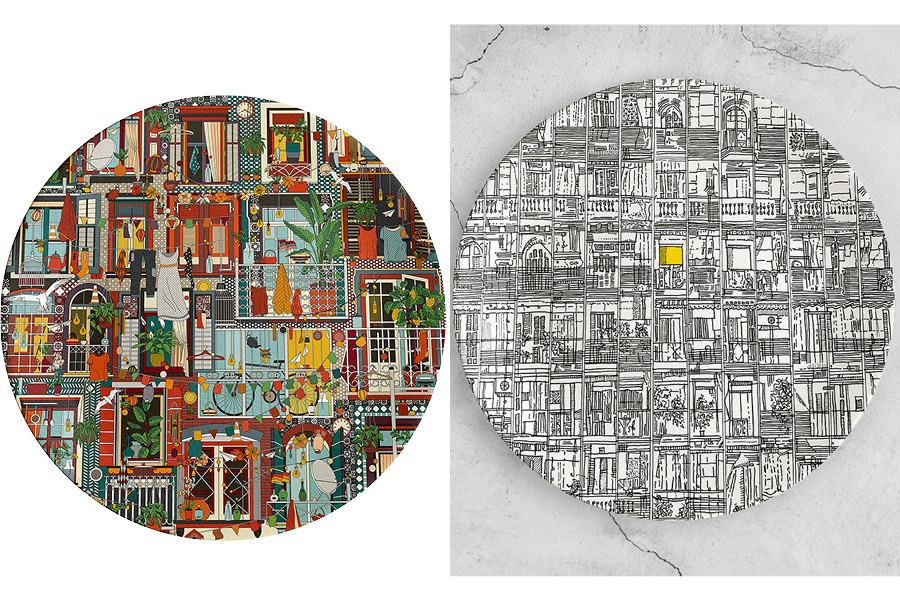 “India still has a long way to go in ensuring every individual has access to three meals a day. We fare extremely poorly in the Global Hunger Index and the disparity between the haves and the have-nots is only increasing. Even with enough food production to feed every citizen, it is shocking how millions go to bed hungry and wake up with the uncertainty of when they will eat next,” says Tina Kapoor of the Milaan Foundation, a social impact organisation, based in Haryana.

The Plated Project and the Milaan Foundation have been associated since August 2021. “We received a call from them about collaborating with us. We were excited and soon took their team through the work we do. We have repeatedly been supported with funds by the project for meals for our school, known as Swarachna, located in rural Uttar Pradesh, serving first-generation learners and underprivileged children, with a focus on girls' education,” adds Kapoor.

Apart from the Milaan Foundation, the project is associated with more than 10 NGOs, like GiveIndia, and Kranti. The Plated Project products cost between Rs 799 and Rs 25,000; 50 percent of the revenue goes to the NGOs for sponsoring meals. From each item’s sale, a minimum of 10 meals is donated every month.

The Plated Project started with a seed investment of Rs 1.5 lakh from Sinha, who says it has been profitable since inception and has grown by 100 percent since last year. “We are proud of the fact that we are profitable. Everyone in the team gets best-in-class salaries, and we still are able to donate an average of 50 percent of our profits every month to charity. We usually do not disclose sales figures publicly but focus more on the impact that we make,” Sinha says. The project aims to grow by 200 percent in the near future and only then will it look towards raising funds.

Over 1 lakh consumers from India and abroad have become customers of The Plated Project. What started as an Instagram handle with three followers, has now become a community of over 40,000 followers. The project has received recognition from global media platforms like The Guardian and New York Times, and the team was invited to showcase their work at Art Basel, Hong Kong, one of the biggest art fairs in the world.

The project plans to expand in the coming years. It had started with the single category of ‘decor plates’, and has now expanded to dinnerware and related homeware. “We are going to launch about 10 new products this year, and will also open offices in Mumbai and Delhi,” concludes Sinha.

Tweets by @forbesindia
In the ocean, it's now snowing microplastics
Photo Of The Day: Summer treat