Many Americans woke up stunned, not realizing — and some still not believing — that Roe and the constitutional right to an abortion that it has guaranteed for five decades could disappear within a matter of weeks 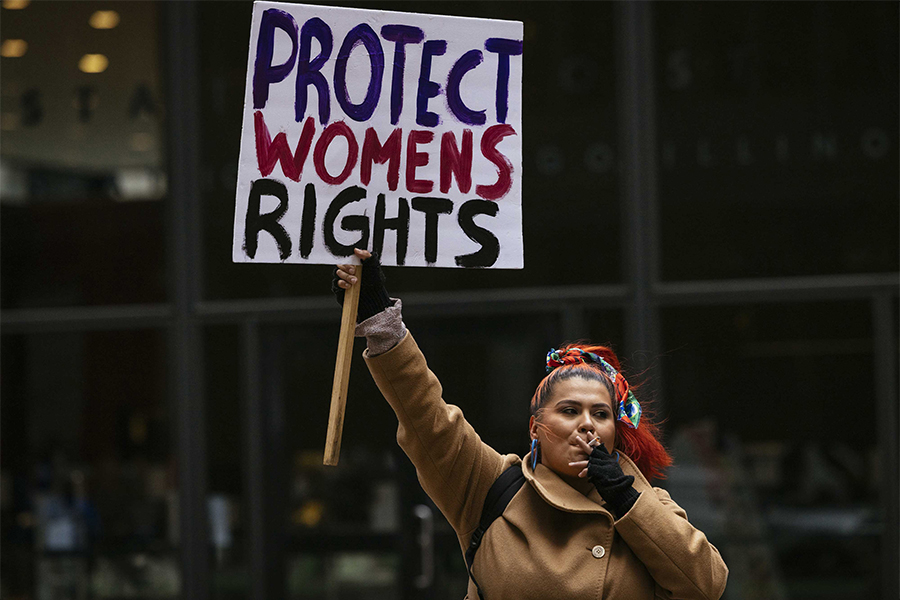 Opponents and supporters of abortion rights had expected for months that the Supreme Court would vote to overturn Roe v. Wade, but the leaked draft opinion late Monday came as if out of the blue, setting off shock, outrage and jubilation on either side of the nation’s deeply polarized abortion debate.

Activists took to the streets to declare their intention to fight harder, especially over control of Congress in this year’s midterm elections. Candidates sought to raise money off the news. And in states that are poised to ban abortion or guard access to it, politicians and governors declared that they were ready to act.

Yet many Americans woke up stunned, not realizing — and some still not believing — that Roe and the constitutional right to an abortion that it has guaranteed for five decades could disappear within a matter of weeks.

Connie Wright, a Des Moines, Iowa-area grandmother of eight, was getting ready for bed Monday night when her phone lit up with a friend’s text about the leak. Searching online to confirm it, Wright fell to her knees. “I feel like this is something I’ve been praying for forever,” she later said. “And that it was answered prayer. And I just kept thanking the Lord for these innocent babies’ lives that are being saved.”

Jordyn McFadden, a first-year law student at Washington University in St. Louis who was studying outside a Starbucks, said the draft ruling that suggests Roe v. Wade will be overturned made her see the Supreme Court as “tyrannical.”

“Just another political body,” said McFadden, 23, who is from New Hampshire. “It’s insane to me that an unelected body can control the right” to have an abortion. “And after how many years of having the right to an abortion with Roe v. Wade? Now it’s completely over.”

For the people most involved, the leak was a call to action.

Bradley Pierce, who leads the Foundation to Abolish Abortion, was on his way to Louisiana to testify for a bill he helped draft there when he paused in an airport to do a Facebook Live post about the leaked opinion.

“We need to be putting political pressure on the court right now,” he told supporters. “We need to keep introducing bills about abolition across the country. Don’t let up.” 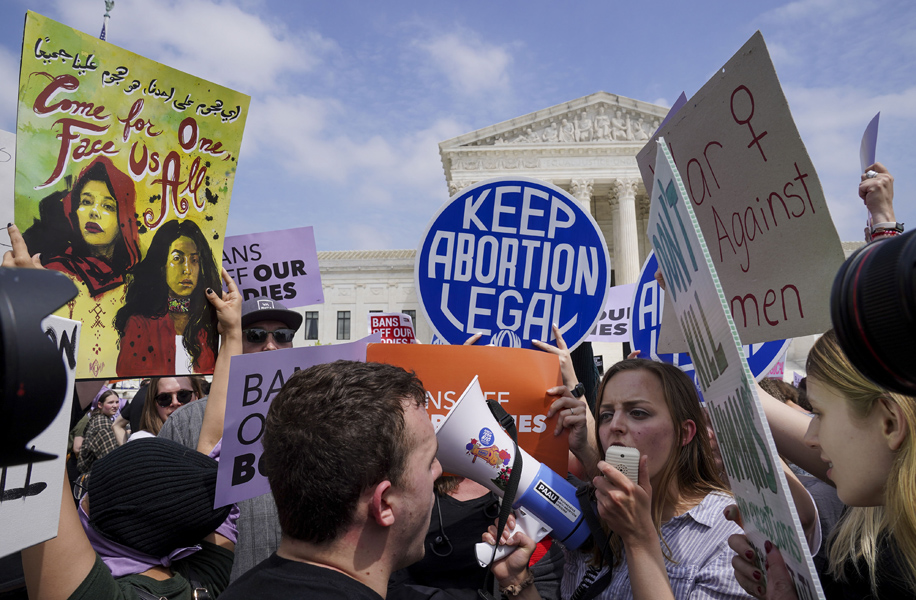 Anti-abortion and abortion-rights demonstrators mix outside the Supreme Court following a leaked draft opinion that the Supreme Court has potentially voted to overturn Roe V. Wade, in Washington, May 3, 2022. The Supreme Court on Tuesday confirmed the authenticity of a leaked draft ruling overturning the Roe v. Wade decision establishing a constitutional right to abortion but stressed that it was not final even as the disclosure triggered a political earthquake with potentially broad electoral and legal consequences. (Leigh Vogel/The New York Times)

On the steps of the Supreme Court in Washington, Jamie Manson, president of Catholics for Choice, declared herself “shocked but not surprised.” She had been at the court in early December, when the justices heard oral arguments in the case at issue, a Mississippi law that bans abortion after 15 weeks of pregnancy, well before the limit of viability established by Roe. Those arguments made clear that a majority of the justices — she called them “five radically anti-choice Catholics” — were in favor of overturning the decision.

“Last week we had polling that 30% of Americans didn’t think anything was going to happen to Roe and hadn’t heard much about it,” she said. “I hope today that number is zero.”

“We’re fighting a religious movement,” she said, “we have religious ideology being codified into law, and we have to have people of faith rising up and saying, ‘Not in our name.’”

Although there has not been an official ruling from the Supreme Court, governors were pushing ahead with the fight. Several Republican governors, including those in Florida and Virginia, condemned the leak, saying it was an attempt to whip up opposition to the court’s decision and mobilize Democrats. In Oklahoma, Gov. Kevin Stitt, a Republican, signed a ban on abortions after about six weeks, modeled on a Texas law the Supreme Court has allowed to stand that relies on civilian enforcement, with bounties of at least $10,000 for successful lawsuits against anyone who aids or abets an abortion.

In Miami, Jamaica Rose, a 32-year-old chef who supports Roe v. Wade, was among those still doubting that the court would consider overturning it after so many decades.

“I don’t see it as a realistic possibility,” she said, even though she had heard the news the night before. “It’s pretty longstanding and it has had a lot of support.”

“It’s something that’s kind of ingrained,” she said. “Individuality is huge for every American.”

Near the city’s Freedom Tower, a group of protesters was gathering, summoned by text messages from abortion rights groups and Democrats with news of the draft opinion.

When Christina Rodriguez first read the news over her morning coffee in Tucson, Arizona, she hoped it was misinformation, or some kind of mistake. Within a few hours, Rodriguez, 34, was preparing to attend an impromptu protest outside the federal courthouse Tuesday evening.

Rodriguez has worked as a field organizer for Democratic causes but is currently at home with her 2-year-old and anticipating the birth of her second son this summer. “It’s absolutely imperative for my children, boy or girl, to make decisions about their own bodies,” she said. “Now that that choice could be stripped away, it’s scary.”

Even before the draft opinion was leaked Monday night, a coalition of national abortion rights groups had announced they would spend $150 million to help elect allies up and down the ballot in the midterms this November. But Tuesday morning, they acknowledged that it had been hard to mobilize support among voters, or even convince sympathetic Americans that Roe was at risk.

The organizers of the Women’s March, which attracted hundreds of thousands of demonstrators after the election of Donald Trump, called for supporters of abortion rights to gather outside federal, state and local government buildings Tuesday. Rachel O’Leary Carmona, the executive director, predicted that the draft opinion would prove even more motivating. “We do know that this is an issue that charges up our base,” she said. “We expect to see big pushback.”

But if overturning Roe was a victory for anti-abortion groups, they were not resting. Outside the Supreme Court, Randall Terry, founder of Operation Rescue, who has been frequently arrested and the target of many lawsuits for his anti-abortion actions, said they would next push for a federal law prohibiting abortion, similar to one that outlawed polygamy.

“This is like D-Day for us,” he said. “This is taking the beach. It is not the end of the war. We will make it to Berlin.”