Biden's biofuel: Cheaper at the pump, but high environmental cost

Speaking at a bioethanol production plant in the Midwestern state of Iowa, Biden said Tuesday that the EPA would lift a restriction prohibiting the sale of E15 between June 1 and September 15 — a constraint that was imposed to limit air pollution 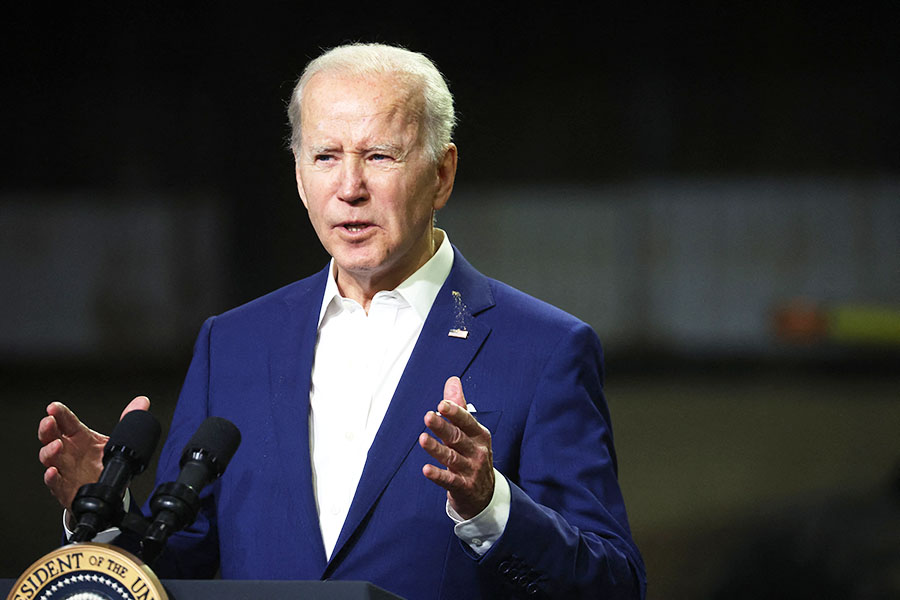 Washington, United States: In an effort to ease Americans' pain at the gas pump, President Joe Biden has announced his administration will ease restrictions on the sale of E15 — gasoline that includes 15 percent ethanol — and new investments in biofuels as a whole.
But the decision hasn't pleased scientists who study the environmental impact of ethanol.

Fuel ethanol is based on the same type of alcohol used in beverages, but with "denaturant" additives that make it unsuitable for drinking.
Blending ethanol with gasoline eases reliance on crude oil.
Most gas now sold in the United States is E10. American ethanol is generally produced by fermenting sugar from corn starch. Other countries such as Brazil rely on sugar from sugar cane.
In 2011, the US Environmental Protection Agency approved the use of E15 following research on its pollution impact.
But it is currently offered at just 2,300 gas stations in the country, according to officials.

What has Biden announced?

Speaking at a bioethanol production plant in the Midwestern state of Iowa, Biden said Tuesday that the EPA would lift a restriction prohibiting the sale of E15 between June 1 and September 15 — a constraint that was imposed to limit air pollution.
That's because ethanol evaporates more easily and turns more readily into smog, which is particularly problematic in the high heat and sunlight of summer.
In 2018, then president Donald Trump also wanted to lift this restriction, as a concession to farmers in the midst of a trade war with China.
But a court decision eventually overturned Trump's decision.
According to the White House, at today's prices, E15 can save an average of 10 cents per gallon of gasoline (4.5 liters).

Though biofuels have been touted for their ability to reduce greenhouse gas emissions, assessing the environmental impact of bioethanol requires including greenhouse gas emissions related to the crops needed for its production.
And "the carbon balance of ethanol relative to gasoline isn't as good as it was originally anticipated," Tyler Lark, a scientist at the University of Wisconsin-Madison told AFP.
In 2005, Congress passed a "Renewable Fuel Standard," which required transportation fuel to include a volume of biofuel that increased over time.
The law was further expanded in 2007. As a result, 2.8 million additional hectares of corn were grown between 2008 and 2016, according to a study published in February in the Proceedings of the National Academy of Sciences (PNAS).
Lark, the first author of the PNAS study, said the consequences of converting land to corn cultivation were underestimated at the time.
"When you do that, you plow up other types of land that may have been sequestering carbon and you apply extra nitrogen fertilizer to grow that corn," he said.
In addition, some of the fertilizer used to grow corn emits nitrous oxide (N2O), a very powerful greenhouse gas.
Thus, greenhouse gas emissions related to gasoline or ethanol are ultimately comparable, concludes the study.
There are other harmful consequences, too — including leaching of fertilizers into ground water, and the destruction of wildlife habitats to make way for corn fields.

Once in the tank, bioethanol emits less CO2 per liter than traditional fuels, but there's less energy per volume and so more is needed.
In addition, "it produces acetaldehyde which is a carcinogen, formaldehyde, which is a carcinogen and both of those are two of the five most potent ozone producers in photochemical smog," explained Mark Jacobson, a professor of environmental engineering at Stanford University.
Ground-level ozone represents a major health hazard, causing numerous respiratory problems including asthma. For Jacobson, both gasoline and biofuels are "horrible."
"It's bad for both climate and air pollution, and spending money on it is taking money away from real solutions" such as electric vehicles, he concluded.
By Lucie Auborg
© Agence France-Presse

Tweets by @forbesindia
Not just milk: How Country Delight is planning to become a Rs 600 crore brand
Heads Up for Tails: For the love of dogs