In the world of central bankers, among technocrats tasked with keeping prices under control and financial systems stable, Nabiullina became a rising star for using orthodox policies to manage an unruly economy often tethered to the price of oil 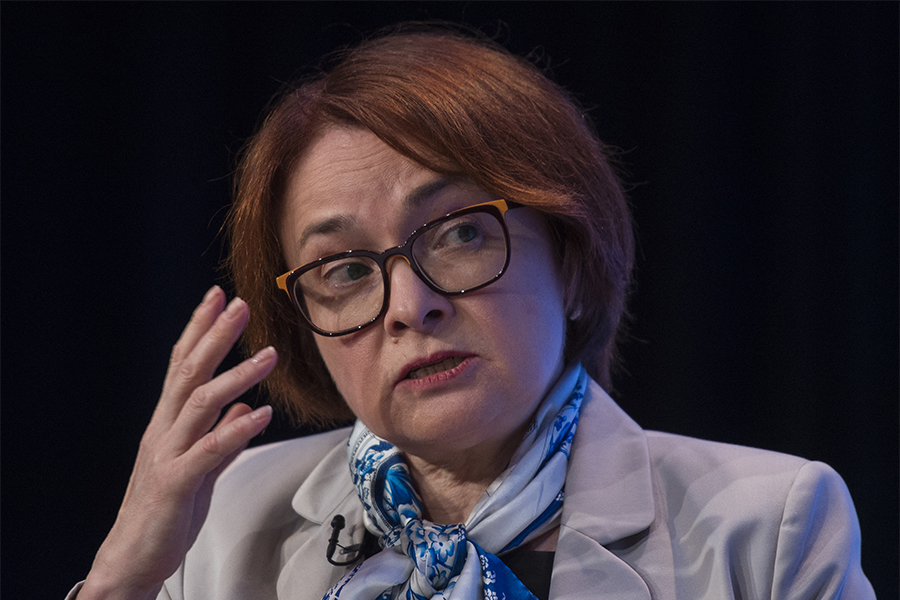 For the second time in less than a decade, Elvira Nabiullina is steering Russia’s economy through treacherous waters.
In 2014, facing a collapsing ruble and soaring inflation after barely a year as head of the Central Bank of Russia, Nabiullina forced the institution into the modern era of economic policymaking by sharply raising interest rates. The politically risky move slowed the economy, tamed soaring prices and won her an international reputation as a tough decision maker.
In the world of central bankers, among technocrats tasked with keeping prices under control and financial systems stable, Nabiullina became a rising star for using orthodox policies to manage an unruly economy often tethered to the price of oil. In 2015, she was named Central Bank Governor of the Year by Euromoney magazine. Three years later, Christine Lagarde, then the head of the International Monetary Fund, effused that Nabiullina could make “central banking sing.”

Now it falls to Nabiullina to steer Russia’s economy through a deep recession, and to keep its financial system, cut off from much of the rest of the world, intact. The challenge follows years she spent strengthening Russia’s financial defenses against the kind of powerful sanctions that have been wielded in response to President Vladimir Putin’s geopolitical aggression.
She has guided the extraordinary rebound of Russia’s currency, which lost one-quarter of its value within days of the Feb. 24 invasion of Ukraine. The central bank took aggressive measures to stop large sums of money from leaving the country, arresting a panic in markets and halting a potential run on the banking system.
In late April, Russia’s parliament confirmed Nabiullina, 58, for five more years as chairwoman after Putin nominated her to serve a third term.
“She’s an important beacon of stability for Russia’s financial system,” said Elina Ribakova, the deputy chief economist of the Institute of International Finance, an industry group in Washington. “Her reappointment has symbolic value.”

In her last crisis, she turned a catastrophe into an opportunity. In 2014, Russia was rocked by twin economic shocks: a collapse in oil prices — caused by a jump in U.S. production and the refusal of Saudi Arabia to cut production, denting Russia’s oil revenue — and economic sanctions imposed after Russia annexed Crimea.
The ruble plummeted. Nabiullina abandoned traditional policies — such as spending vast amounts of foreign currency reserves to support the exchange rate — and turned the bank’s focus to managing inflation. She raised interest rates to 17%, and they stayed relatively high for years.
It was a painful readjustment, and the economy shrank for a year and a half. But by mid-2017, she had managed something that had seemed far-fetched just a few years earlier: The inflation rate fell below 4%, the lowest in the country’s post-Soviet era.
“She’s been the very model of a modern central banker,” said Richard Portes, a professor of economics at London Business School who has shared panel stages with Nabiullina at conferences.
“She was doing what she had to do,” he said, even when it was politically difficult. “If you want a demonstration of the alternative,” Portes added, “you need look only at Turkey,” where years of political interference in the central bank have allowed inflation to run out of control, reaching 70% this month.
Under Nabiullina’s direction, the central bank kept up its modernizing efforts. It improved its communication by scheduling key policy decisions, providing guidance about policy, meeting with analysts and submitting to interviews with reporters. The Central Bank of Russia came to be regarded as the key economic brain of the country, attracting respected economists from the private sector.
At its annual conference in St. Petersburg, the central bank drew economists from around the world, and Nabiullina attended international gatherings, including the Federal Reserve’s annual symposium at Jackson Hole in Wyoming and regular meetings for central bankers held by the Bank for International Settlements in Basel, Switzerland.
She has been described as personable, focused, always well-prepared, an advocate of market forces (despite her Soviet-era economics education) and a fan of history and opera. Born in Ufa, a city more than 700 miles east of Moscow known for heavy industry, she studied at Moscow State University, one of the country’s most prestigious schools, and is married to a fellow economist.

Cleaning up the banks

Besides her record on monetary policy, Nabiullina has drawn praise for pursuing a thorough cleanup of the banking industry. In her first five years at the bank, she revoked about 400 banking licenses — essentially closing one-third of Russia’s banks — in an effort to cull weak institutions that were making what she termed “dubious transactions.”
It was considered a brave crusade: In 2006, a central bank official who had started a vigorous campaign to close banks suspected of money laundering was assassinated.
“Fighting corruption in the banking sector is a job for very courageous people,” said Sergei Guriev, a Russian economist who left the country in 2013 and is now a professor at Sciences Po in Paris. He called her program flawed, though, because it was largely limited to private banks. This created a moral hazard problem that left state-owned banks feeling comfortable taking on lots of risk with the protection of the government, he said.
Nabiullina’s integrity has never been questioned, added Guriev, who said he had known her for 15 years. “She’s never been suspected of any corruption.”

Nabiullina has been a high-ranking official in Putin’s regime for two decades. She was his chief economic adviser for little more than a year before she was made chair of the central bank in June 2013, having already served as minister for economic development while Putin was prime minister.
“She’s well-trusted in the government and by the president,” said Sofya Donets, an economist at Renaissance Capital in Moscow who worked at the central bank from 2007 to 2019. In recent years, it was quite evident that all kinds of policy questions in the financial sphere were delegated to the central bank, she added.
This trust was built up while Nabiullina was buttressing Russia’s economy against Western sanctions, especially from the long reach of American penalties. In 2014, the United States cut off many major Russian companies from its capital markets. But these companies had large amounts of foreign currency debt, raising alarms over how they would service their debts.
Nabiullina set about squeezing as many U.S. dollars from the economy as possible, so that companies and banks would be less vulnerable if Washington further restricted access to the country’s use of dollars.
She also shifted the bank’s reserves, which grew to be worth more than $600 billion, toward gold, the euro and the Chinese renminbi. Over her tenure, the share of dollars in the reserves fell to about 11%, from more than 40%, Nabiullina told parliament last month. Even after sanctions froze the bank’s overseas reserves, the country has “sufficient” reserves in gold and renminbi, she told lawmakers.
Other protections against sanctions included an alternative to SWIFT, the global banking messaging system, developed in recent years. And the bank changed the payments infrastructure to process credit card transactions in the country so even the exit of Visa and Mastercard would have minimal effect.
In March, Bloomberg News and The Wall Street Journal, citing unidentified sources, reported that Nabiullina had tried to resign after the Ukraine invasion, and had been rebuffed by Putin. The central bank rejected those reports.
Last month, the Canadian government placed her under sanctions for being a “close associate of the Russian regime.”
Guriev, who has not been in recent contact with Nabiullina, said he thought she might be staying in her role because she could convince herself that if she stepped down, inflation would get out of control and ordinary Russians would be hurt more severely.
“However, I think that she is actually propping up Putin’s war economy,” he added. “She is actually doing something that she didn’t sign up for.”

After Nabiullina spent nearly a decade building a reputation for subduing inflation and bringing traditional monetary policy to Russia, the Western financial penalties imposed after the Ukraine invasion quickly forced her to abandon her preferred policies. She more than doubled the interest rate, to 20%; used capital controls to severely restrict the flow of money out of the country; shut down stock trading on the Moscow Exchange; and loosened regulations on banks so lending didn’t seize up.
These measures stopped the initial panic and helped the ruble rebound, but the capital controls have only been partly lifted.
Now Russia is entering into a steep recession with a closed economy. On April 29, the bank lowered the interest rate to 14%, a sign it was shifting from quelling a financial tornado to trying to minimize the prolonged impact of sanctions on households and businesses as inflation speeds up and companies are forced to reinvent their supply chains without imported goods.
Inflation has climbed steeply, and could reach an annual rate of 23% this year, the central bank forecast. The overall economy, it said, could shrink as much as 10%.
“We are in a zone of enormous uncertainty,” Nabiullina said.
This article originally appeared in The New York Times.