Since Moscow's invasion in late February, Western support has helped Ukraine hold off its neighbour's advances in many areas—including the capital Kyiv—but Russia is now focused on securing and expanding its gains in Donbas and the southern coast 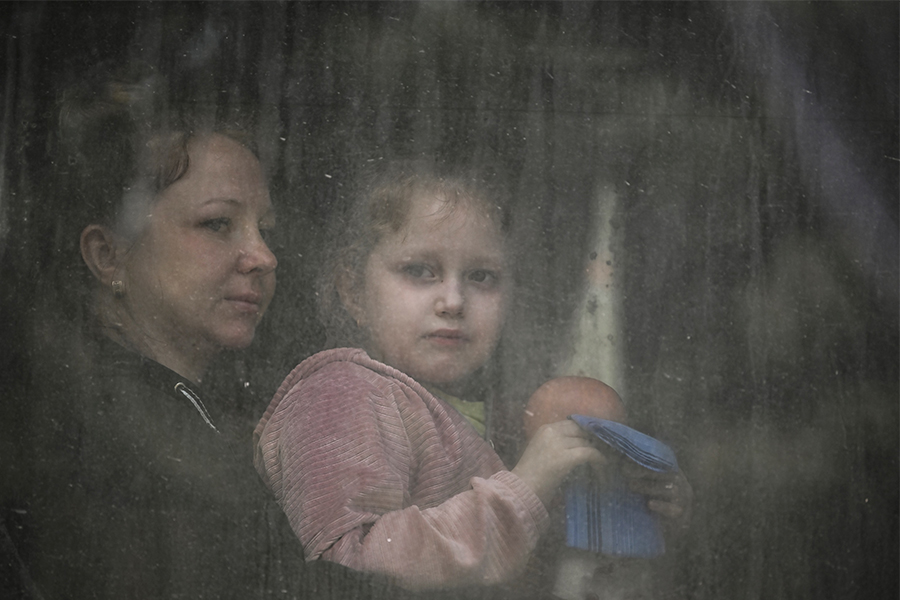 A mother with her daughter sit inside a bus as they evacuate the city of Bakhmut in the eastern Ukranian region of Donbas on May 22, 2022, amid Russian invasion of Ukraine.​ (Credits: ARIS MESSINIS / AFP)

Russian forces on Tuesday stepped up their offensive on the last pocket of resistance around Lugansk in Ukraine's eastern Donbas region, as the conflict entered its fourth month.
Since Moscow's invasion in late February, Western support has helped Ukraine hold off its neighbour's advances in many areas—including the capital Kyiv—but Russia is now focused on securing and expanding its gains in Donbas and the southern coast.
"The coming weeks of the war will be difficult, and we must be aware of that," Ukraine's President Volodymyr Zelensky said Monday in his nightly address after regional leaders and residents reported heavy bombardments.

"The most difficult fighting situation today is in Donbas," Zelensky said, singling out the worst-hit towns of Bakhmut, Popasna and Severodonetsk.
The governor of Lugansk, in Donbas, said that Russia has sent thousands of troops to capture his entire region and that Severodonetsk was under massive attack, warning residents that it was too late to evacuate.
"At this point I will not say: get out, evacuate. Now I will say: stay in a shelter," Sergiy Gaidai said on Telegram. "Because such a density of shelling will not allow us to calmly gather people and come for them."
Residents of Bakhmut, a crucial junction that serves as a command centre for much of the Ukrainian war effort, told AFP of the aerial onslaught they had suffered.
"I looked up from my prayers and heard a frightening sound," 82-year-old Maria Mayashlapak said next to the splintered remains of her home.
"Every day I pray to God asking to avoid injuries. God heard me. God is watching over me."

Zelensky said in his address that Russia has carried out nearly 1,500 missile strikes and over 3,000 airstrikes against Ukraine in the first three months of the war.
The president earlier warned elites gathered at the World Economic Forum in Davos—from which Russians have been barred this year—that slow-walking military aid was causing unnecessary deaths as Ukrainians are "paying dearly for freedom and independence".
He said that 87 people had been killed in a Russian attack earlier this month on a military base in the north, in what would be one of the largest single recorded strikes of the war.
Western countries have sent huge amounts of weapons and cash to Ukraine to help it repel Russia's assault, and punished Moscow with unprecedented economic sanctions.
But Zelensky said via videolink that tens of thousands of lives would have been saved if Kyiv had received "100 percent of our needs at once back in February", when Russia invaded.
He also ramped up his demands that Moscow be cut off from the global economy, calling for an international oil embargo on Russia, as well as punitive measures against all its banks and the shunning of its IT sector.

A 21-year-old Russian soldier was on Monday found guilty of war crimes for killing an unarmed civilian and handed a life sentence by a Kyiv court, in the first verdict of its kind since the invasion began.
Vadim Shishimarin looked on from a glass defence box as he was sentenced in a trial followed around the world—likely the first of many as Ukraine investigates thousands of alleged war crimes.
The sergeant from Siberia had admitted to killing a 62-year-old civilian, Oleksandr Shelipov, as he was riding his bike in the village of Chupakhivka in northeast Ukraine.
He claimed he shot Shelipov under pressure from another soldier as they tried to retreat and escape back into Russia in a stolen car on February 28.
But prosecutors stated he shot between three and four bullets with the intention of killing the civilian, and Judge Sergiy Agafonov sentenced him to life.
International institutions are also probing abuses allegedly committed by Russian forces in places such as Bucha and Mariupol, which have become emblematic of the destruction and suffering of the war.

Meanwhile, a counsellor at Moscow's mission to the United Nations in Geneva, Boris Bondarev, announced he was leaving his job after 20 years of diplomatic service in protest at Russia's invasion.
In the letter circulated to a number of diplomatic missions in Geneva and seen by AFP, he condemned the war as "not only a crime against the Ukrainian people but also, perhaps, the most serious crime against the people of Russia".
"Never have I been so ashamed of my country," he said.
More than six million people have fled Ukraine and eight million have been internally displaced since the war broke out, according to the United Nations.
By Charlotte Plantive with Dmitry Zaks in Severodonetsk and Patrick Fort in Kharkiv
© Agence France-Presse