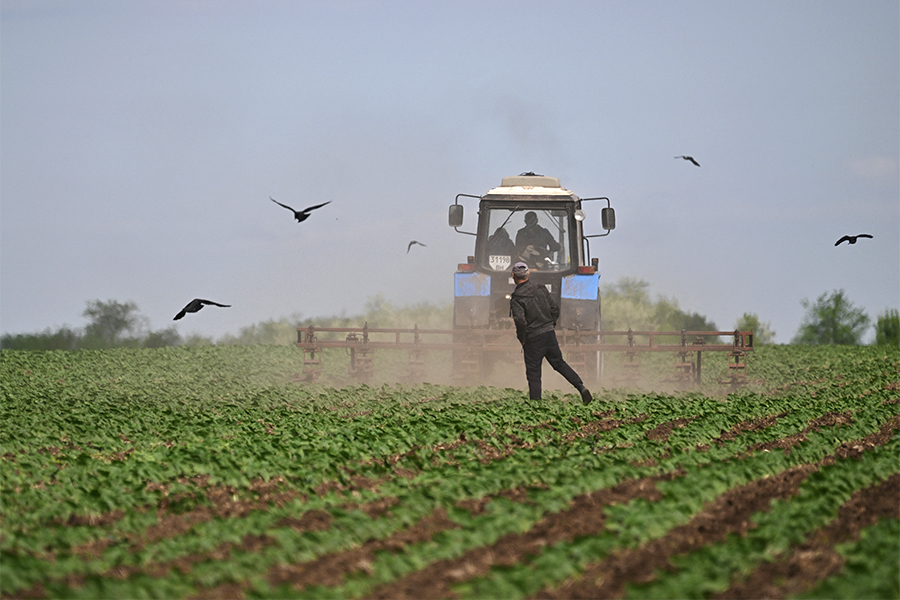 A man drives a tractor on a sunflowers field at a farm in southern Ukraine’s Odessa region on May 22, 2022, on the 88th day of the Russian invasion of Ukraine.​ (Credits: Genya SAVILOV / AFP)

Odessa, Ukraine: Staring out over Ukraine's seemingly endless wheat fields near Odessa, Dmitriy Matulyak has a difficult time imagining that so many people may starve soon as another bountiful harvest nears.
The war has been hard on the 62-year-old farmer.
On the first day of invasion, an airstrike hit one of his warehouses, incinerating over 400 tonnes of animal feed as Russian troops fanned out from their bases in the Crimean Peninsula and seized large chunks of southern Ukraine.
"My voice trembles and tears come to my eyes because of how many people I know that have already died, how many relatives are suffering and how many have gone abroad," he tells AFP.
But worse may still lie ahead.
The Russians never stormed the beaches in the nearby port of Odessa as feared, but their ongoing blockade of the Black Sea has been ruinous—unleashing economic devastation in Ukraine and threatening famine elsewhere.

Silos and ports across Ukraine are now brimming with millions of tonnes of grain with nowhere to go as the country is slowly suffocated by the siege.
In Ukraine's balmy south, the summer harvest is set to begin in the coming weeks, but few know where exactly they will put this season's wheat, stirring fears that large portions of the grain and other food products will be left to rot.
"It's savagery for one country to have food spoiling like this and for other people to be left poor and hungry," says Matulyak. "This is an atrocity. It’s savagery. There is no other way to put it."

While much of the war's focus remains on the grinding battle of attrition in eastern Ukraine, the Black Sea blockade may trigger the most wide ranging consequences from the conflict yet, with experts issuing increasingly dire warnings about surging food prices and potential famine.
Before the Russian invasion, Ukraine served as one of the world's leading breadbaskets—exporting roughly 4.5 million tonnes of agricultural produce per month through its ports, including 12 percent of the planet's wheat, 15 percent of its corn, and half of its sunflower oil.
The war and its ongoing blockade has largely brought the trade to a halt, with alternative routes by rail and truck unable to tackle the enormous logistical and financial hurdles needed to move so much produce to international markets.
The United Nations Secretary-General Antonio Guterres has been unequivocal on the matter, saying last week that the war "threatens to tip tens of millions of people over the edge into food insecurity".
What might follow would be "malnutrition, mass hunger and famine, in a crisis that could last for years", he warned.
To date, over 20 million tonnes of food products remain stuck in Ukraine, according to Ukrainian authorities.
In southern Odessa, the crisis can be felt acutely. The port remains idle with nothing coming in or going out for months now.
For generations, the economic might of Eastern Europe's fertile agricultural heartlands were largely marshalled in Odessa, with its sprawling port and rail hub connecting the region’s wheat fields to the coast.
That centuries-old link has now been severed.
The city's port and warehouses are currently holding more than four million tonnes of grain, all of which came from the last harvest.
"We won't be able to store this new harvest in any way, that's the problem," says Odessa mayor Gennady Trukhanov.
"People will simply die of hunger," he says if the blockade continues.

Ukraine's economy has also been ravaged as a result, with World Bank estimates predicting the war and crippling naval siege would likely trigger a 45 percent decline in the country's GDP this year.
And while Ukraine's land forces have proven resilient against a larger, better armed enemy, the Russians continue to enjoy almost complete superiority at sea.
"Unfortunately, Ukraine has traditionally overlooked the issue of maritime security," explained the country's former defence minister Andriy Zagorodnyuk in a paper published by the Atlantic Council.
"While the democratic world has taken up the challenge of arming Ukraine to resist Russian aggression on land, international involvement in the war at sea has been more limited."
Over the weekend, Ukrainian President Volodymyr Zelensky called on the world to intervene, begging for the "relevant weapons" that could help bring the Russians to heel and end the blockade.
"It will create a food crisis if we do not unblock the routes for Ukraine, do not help the countries of Africa, Europe, Asia, which need these food products," the president argued.
But even if given the needed arms, it could take months or longer to kickstart trade again if the war rages on, with shipping companies unlikely to send their fleets into an active conflict zone.
For farmers like Matulyak who were born in the Soviet Union and once enjoyed "brotherly" ties to Russia, the ongoing conflict and its fallout is hard to swallow.
"Of course it would be good if all these issues could be resolved by some diplomatic peaceful means," he says. "But we have already seen that Russia does not understand the normal values people hold."
By David STOUT
© Agence France-Presse