This fortnight's climate special takes a 360-degree view of the climate crisis, from manufacturers like GE that are adapting to the need for a decarbonised world, to startups working on tech innovations, and investors and philanthropists backing for-profit and not-for-profit models 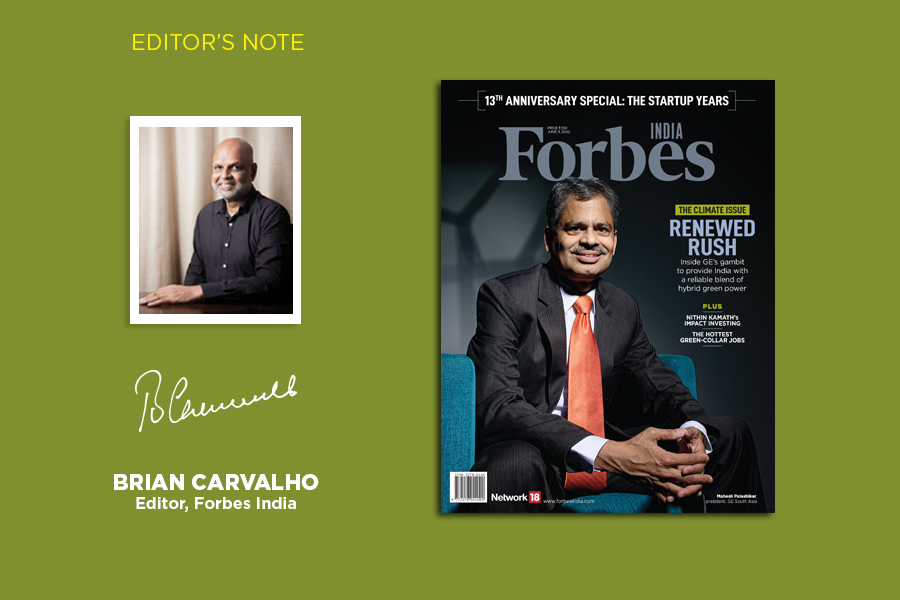 Early heatwaves are a reminder of our vulnerability to climate change

There are world language days (Chinese, Russian, French) and world disease days (diabetes, malaria, hepatitis), but those dedicated to saving the planet may just outnumber all other such commemorations. Consider: In a few days will arrive World Environment Day (June 5) and just a few days ago World Biodiversity Day (May 22) passed us by. Before that, on various days in March and April came World Wildlife Day, International Day of Forests, World Water Day, World Meteorological Day, Earth Day, to name just a few. And we’re not even counting those dedicated to particular flora and fauna—World Rainforest Day, International Tiger Day, World Giraffe Day, World Tuna Day… it’s a long list.

The idea, of course, is to raise awareness and funds for each of these causes which, the hope is, will collectively go a long way in conservation. While EarthDay.org, which took shape after the first Earth Day in 1970, observes that April 22 is a reminder to “invest in our planet”, it does acknowledge that it is “Earth Day Every Day”.
Keeping with that spirit, Forbes India decided not to wait till the International Day of Climate Action—that’s on October 24—to write about how global warming can be limited with technology, funding and innovation.
India’s unseasonable heatwaves—which were responsible for the March of 2022 being the hottest ever since 1902—are a live reminder of our vulnerability to climate change. As Sumaira Abdulali and Naandika Tripathi write in ‘A Vicious Climate Change Circle’, not only have the frequency and length of heatwaves increased, their intensity has, too.
This fortnight’s climate special, helmed by Technology Editor Harichandan Arakali, takes a 360-degree view of the climate crisis—from manufacturers like General Electric (GE) that are adapting to the need for a decarbonised world, to startups working on tech innovations, and investors and philanthropists backing for-profit and not-for-profit models.
The Forbes India cover story is about the key role GE’s portfolio of renewables can play in India reaching its goal of getting half of its energy from renewable sources by 2030. In February, GE Renewable Energy opened a renewables hybrids factory near Chennai to provide end-to-end solutions for customers demanding reliable green power. In ‘Powering On’ on page 24, Mahesh Palashikar, president of GE South Asia, explains to Arakali why the company has made ramping up renewables its top priority.
Another big story is on the efforts of a successful fintech entrepreneur in shifting the spotlight to the human cost of climate change. In early 2021, Nithin Kamath, founder of India’s largest stockbroker Zerodha, announced the launch of Rainmatter Foundation with a $100 million commitment to climate. The twin enablers: Grants and fellowships to non-profits (via the Foundation), as well as investments in for-profit ventures through incubator Rainmatter Climate.
Kamath’s for-profit investments are for a reason that go beyond the obvious. As he tells Divya Shekhar, who met the top team at Rainmatter (along with recipients of their funding): “The thought behind for-profit investments is that economic incentives also lead to people solving large problems. An idea like ‘Is there a way to grow a tree fast?’ will probably happen more in the for-profit space than on the non-profit side.” For more on Kamath’s climate vision, don’t miss ‘Together For Tomorrow’ on page 34.
The Forbes India climate special also has a bunch of startups that are using technology to find climate solutions. One of them is String Bio, which is counting on a patented gas fermentation technology to turn methane into useful proteins. For more of that, and for profiles of more such early climate tech ventures, turn to page 44. Best,
Brian Carvalho
Editor, Forbes India
Email: Brian.Carvalho@nw18.com
Twitter ID: @Brianc_Ed