There is no silver bullet, but a mosaic of actions—from ramping up solar and wind technology to economy-wide energy efficiencies—were identified by the UN's Intergovernmental Panel on Climate Change (IPCC) as low hanging fruit 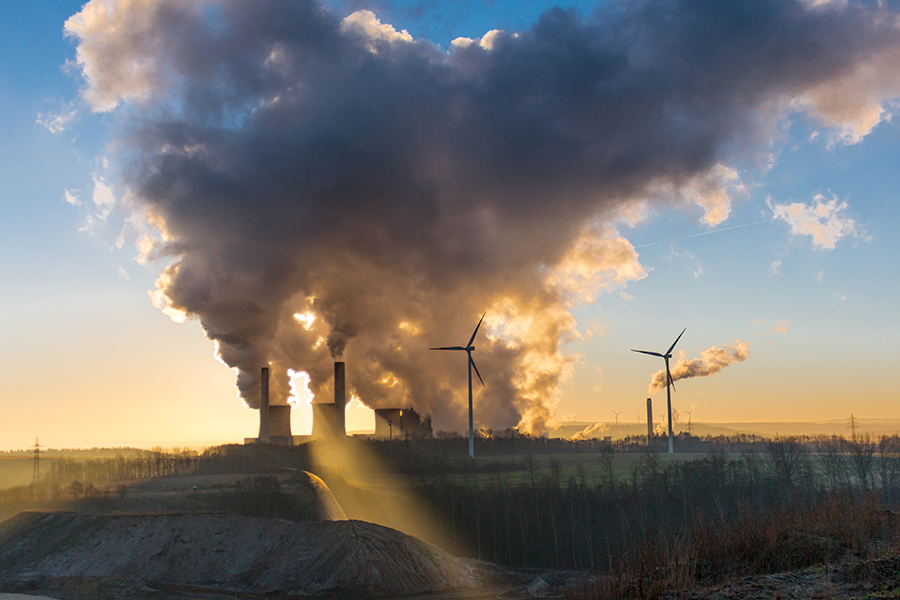 Solar and wind are among the cheapest options available offering potential for carbon reduction thanks to the steep drop in the unit costs of these technologies — down 85 and 55 percent respectively between 2010 and 2019, according to the report. (Credit: acilo / Getty Images)

Not only do we have the tools to slash emissions and curb global warming by 2030, but half of available carbon-cutting options are cost-free or very cheap, UN climate experts say.
There is no silver bullet, but a mosaic of actions — from ramping up solar and wind technology, to economy-wide energy efficiencies — were identified by the UN's Intergovernmental Panel on Climate Change (IPCC) as low hanging fruit.
The IPCC said humanity has less than three years to halt the rise of planet-warming carbon emissions, and less than a decade to slash them by 43 percent from 2019 levels to give us a shot at capping global warming at 1.5 degrees Celsius.
But current policies support continued fossil fuel use and are taking the world in the wrong direction, the IPCC said, in a flagship report on how to avoid catastrophic warming, published on Monday.
Despite the tight timeline, the IPCC said the existing carbon-cutting potential across sectors "is sufficient to reduce global greenhouse gas emissions to half of the current level or less".
While this requires taking action across a wide range of options, the report said that measures that are low-cost "make up more than half of this potential and are available for all sectors".
"The market benefits of some options exceed their costs," it added.

In 2019, total emissions were 59 billion tonnes, or gigatonnes, of CO2 or its equivalent in other greenhouse gases.
The range of options identified would enable a reduction in emissions of 31 to 44 gigatonnes by 2030.
There are four key areas where the total potential for carbon reduction is highest between now and the end of the decade — solar and wind energy, reductions in deforestation, and restoration of forests and other ecosystems.
Of those, solar and wind are also among the cheapest options available thanks to the steep drop in the unit costs of these technologies — down 85 and 55 percent respectively between 2010 and 2019, according to the report.
This "demonstrates that with the right policy incentives and economic frameworks, climate change mitigation can be financed at scale and relatively quickly," said Michael Wilkins, head of the Centre For Climate Finance And Investment at Imperial College Business School.
More investment in solar could see an emissions reduction of between two and seven gigatonnes of CO2 equivalent by 2030. Wind energy could save between 2.1 and 5.6 gigatonnes.
Most of that potential, according to the report, would have essentially negative lifetime costs because they are cheaper than fossil fuel alternatives.
The reduction of methane emissions in the production of fossil energies is also mostly low cost.
Other energy generation options have a lower overall potential, with a higher cost, such as nuclear power and hydroelectricity.

Protecting and restoring natural habitats is the second most significant area for reducing CO2 emissions.
Forests are crucial for absorbing CO2 generated by human activities, and the IPCC found that limiting deforestation and the destruction of grasslands could reduce net emissions between three and almost eight gigatonnes, largely at a low cost.
Restoring these types of ecosystems would save one to five gigatonnes. But action in this category would be at the more expensive end of the range considered by the IPCC.
Shifting to "sustainable" diets and reducing waste food could save more than two gigatonnes, the IPCC said, but it did not give a cost estimate because of wide global variability and a lack of data.

The transport sector is notable for the fact that no single option has a particularly large potential to reduce emissions.
But almost all of the potential measures — switching to public transport and bicycles, fuel efficiency in road vehicles, shipping and aviation — are associated with negative costs.
In the construction sector, reduction in energy demand and efficiencies in things like lighting are seen as the lowest cost options, albeit with limited potential.
The construction of new highly energy efficient buildings have the greatest potential (between less than one and more than two gigatonnes), although costs are towards the higher end.
In industry, meanwhile, most of the options — beyond improving energy efficiency and cutting other greenhouse gas emissions — are associated with higher costs.
But the sector still has significant potential for reducing emissions, in particular the switch to less carbon-intensive energy sources.
"The costs of climate protection are economically absolutely feasible when examined on a global scale and over generations," said Elmar Kriegler, of the Potsdam Institute for Climate Impact Research, who was one of the IPCC authors.
But, he said, costs vary significantly from region to region, with developing countries facing a relatively higher price tag to move away from fossil fuels.
"That is why a fair balance is crucial, not only within individual countries but also internationally. Because one thing is clear: The benefits of climate protection clearly exceed its costs," he added.

Tweets by @forbesindia
Tesla to sell long-awaited cybertruck next year: Elon Musk
Is Picasso being cancelled?