Landmark UN report is a harrowing catalogue of climate misery 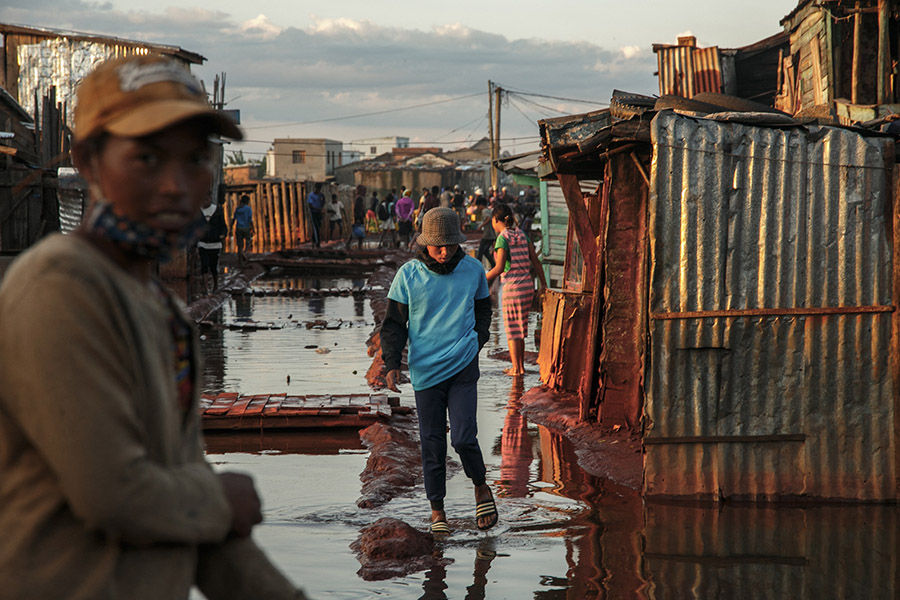 Residents walk in a flooded area of the 67-hectare Ankasina neighbourhood in Antananarivo
Image: RIJASOLO / AFP©

After decades of talking tough on global warming while greenhouse gas emissions rose, the world and its leaders were confronted Monday by a horrifying "atlas of human suffering", and the promise of far worse to come.

Nearly half the planet's population are highly vulnerable to a devastating array of climate impacts, according to a landmark UN report that said time had very nearly run out to ensure a "liveable future" for all.

Just in the last year, the world has seen a cascade of unprecedented floods, heatwaves and wildfires across four continents.

All these impacts will accelerate in the coming decades even if the fossil fuel pollution driving climate change is rapidly brought to heel, the 195-nation IPCC warned.

As nations struggle to finally bend the curve of carbon dioxide emissions downward, they must also prepare for a climate onslaught that in some cases can no longer be avoided, the report made clear.

For UN chief Antonio Guterres, it stands as a "damning indictment" of failed leadership that he described as nothing short of "criminal".

"The world's biggest polluters are guilty of arson of our only home," he said.

Root' of war and warming

Even Russia's invasion of Ukraine cannot distract from the truths laid out in the 3,600-page report and its all-important Summary for Policymakers, those taking part in the virtual, two-week talks said.

"Ignoring this report, or ignoring climate change, is simply not an option," scientist Han-Otto Portner, an IPCC co-chair, told AFP.

"Climate change is affecting us, it's haunting us," he added. "It is an existential threat."

Svitlana Krakovska, who headed Ukraine's delegation, spoke passionately at the conference's final plenary about the link between conflict and global warming.

"Human-induced climate change and the war on Ukraine have the same roots—fossil fuels—and our dependence on them," she said.

Among the report's key takeaways was the intertwined fates of human and natural systems.

It stressed that climate change cannot be tamed unless degraded forests and oceans that stock carbon are restored and protected; and the ecosystems on which we and other life forms depend for clean water, air and soil will not survive intact in a world of runaway warming.

The report made clear that a viable future rests on a knife's edge.

Some dire impacts are already irreversible, such as the likely demise of nearly all shallow water corals.

Others points-of-no-return lie just beyond the Paris Agreement's aspirational target of capping global warming at 1.5 degrees Celsius above preindustrial levels, the report warned.

The 2015 treaty enjoins nations to hold the increase in temperatures to "well below" 2C, but recent science has left no doubt that a 1.5C threshold is far safer.

Even in optimistic scenarios of rapid reductions in carbon pollution, projections of climate impacts are sobering.

Up to 14 percent of land species face a "very high" risk of extinction with only 1.5C of warming, the IPCC said, bolstering calls for conservation of 30 to 50 percent of the world's land and ocean territory. The threat grows with every fraction of a degree.

By 2050 there will be more than a billion people in coastal areas highly vulnerable to storm surges amplified by rising seas by 2050. Per usual, the poorest will often be the hardest hit.

By 2100, the value of global assets within future 1-in-100-year coastal floodplains will be about $10 trillion in a moderate greenhouse gas emissions scenario, according to the report.

The IPCC assessment—the sixth since 1990—highlights the need to cope with unavoidable climate impacts on almost every page.

Overall, the IPCC warns, global warming is outpacing our preparations for a climate-addled world: "At current rates of adaptation planning and implementation, the adaptation gap will continue to grow."

The report also trains a spotlight on irreversible and potentially catastrophic changes in the climate system known as tipping points, triggered at different thresholds of global heating.

These include the melting of ice sheets atop Greenland and the West Antarctic with enough frozen water to lift oceans 13 metres (43 feet); the morphing of the Amazon basin from tropical forest to savannah; and the disruption of global ocean currents that distribute heat across the globe.

"The cumulative scientific evidence is unequivocal: Climate change is a threat to human wellbeing and planetary health," the report concluded.

Further delay in cutting carbon pollution and preparing for impacts already in the pipeline "will miss a brief and rapidly closing window of opportunity to secure a liveable and sustainable future for all."