Jacobabad is in the grip of the latest heatwave to hit South Asia, peaking at 51 degrees Celsius. Canals in the city—a vital source of irrigation for nearby farms— have run dry, with a smattering of stagnant water barely visible around strewn rubbish 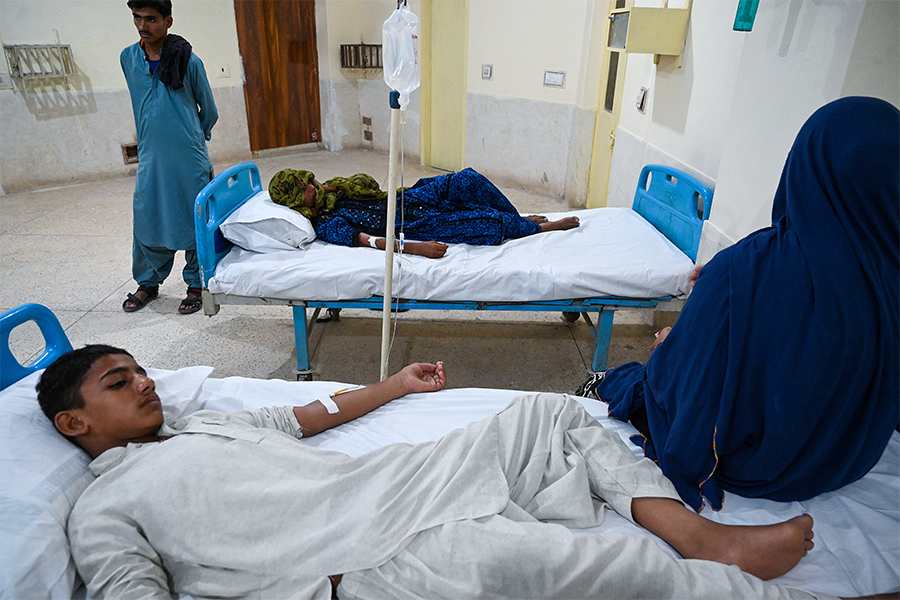 In this picture taken on May 11, 2022, 12-year-old schoolboy Saeed Ali suffering from heatstroke rest laying on a hospital bed in Jacobabad, in southern Sindh province. (Credits: Aamir QURESHI / AFP)

Jacobabad, Pakistan: By the time Pakistani schoolboy Saeed Ali arrived at hospital in one of the world's hottest cities, his body was shutting down from heatstroke.
The 12-year-old collapsed after walking home from school under the burning sun, his day spent sweltering in a classroom with no fans.
"A rickshaw driver had to carry my son here. He couldn't even walk," the boy's mother Shaheela Jamali told AFP from his bedside.
Jacobabad in Pakistan's arid Sindh province is in the grip of the latest heatwave to hit South Asia—peaking at 51 degrees Celsius (124 Fahrenheit) at the weekend.
Canals in the city—a vital source of irrigation for nearby farms—have run dry, with a smattering of stagnant water barely visible around strewn rubbish.
Experts say the searing weather is in line with projections for global warming.
The city is on the "front line of climate change", said its deputy commissioner Abdul Hafeez Siyal. "The overall quality of life here is suffering."
Most of the one million people in Jacobabad and surrounding villages live in acute poverty, with water shortages and power cuts compromising their ability to beat the heat.
It leaves residents facing desperate dilemmas.
Doctors said Saeed was in a critical condition, but his mother—driven by a desire to escape poverty—said he would return to school next week.

"We don't want them to grow up to be labourers," Jamali told AFP, her son listless and tearful at her side.
Heatstroke—when the body becomes so overheated it can no longer cool itself—can cause symptoms from lightheadedness and nausea to organ swelling, unconsciousness, and even death.
Nurse Bashir Ahmed, who treated Saeed at a new heatstroke clinic run by local NGO Community Development Foundation, said the number of patients arriving in a serious condition was rising.
"Previously, the heat would be at its peak in June and July, but now it's arriving in May," Ahmed said.
Labourers forced to toil in the sun are among the most vulnerable.
Brick kiln workers ply their trade alongside furnaces that can reach up to 1,000 degrees Celsius.
"The severe heat makes us feel like throwing up sometimes, but if I can't work, I can't earn," said Rasheed Rind, who started on the site as a child.

Life in Jacobabad is dominated by attempts to cope with the heat.
"It's like fire burning all around. What we need the most is electricity and water," said blacksmith Shafi Mohammad.
Power shortages mean only six hours of electricity a day in rural areas and 12 in the city.
Access to drinking water is unreliable and unaffordable due to scarcity across Pakistan and major infrastructure problems.
Khairun Nissa gave birth during the heatwave, her last days of pregnancy spent wilting under a single ceiling fan shared between her family of 13.
Her two-day-old son now occupies her spot under its feeble breeze.
"Of course I'm worried about him in this heat, but I know God will provide for us," said Nissa.
Outside their three-room brick home, where the stench of rotting rubbish and stagnant water hangs in the air, a government-installed water tap runs dry.
But local "water mafias" are filling the supply gap.
They have tapped into government reserves to funnel water to their own distribution points where cans are filled and transported by donkey cart to be sold at 20 rupees (25 cents) per 20 litres.
"If our water plants weren't here, there would be major difficulties for the people of Jacobabad," said Zafar Ullah Lashari, who operates an unlicensed, unregulated water supply.

'Nothing we can do'

In a farming village on the outskirts of the city, women wake up at 3am to pump drinking water all day from a well—but it is never enough.
"We prefer our cattle to have clean drinking water first, because our livelihood depends on them," said Abdul Sattar, who raises buffaloes for milk and sale at market.
There is no compromise on this, even when children suffer skin conditions and diarrhoea.
"It is a difficult choice but if the cattle die, how would the children eat?" he said.
Pakistan is the eighth most vulnerable country to extreme weather caused by climate change, according to the Global Climate Risk Index compiled by environmental NGO Germanwatch.
Floods, droughts and cyclones in recent years have killed and displaced thousands, destroyed livelihoods and damaged infrastructure.
Many people choose to leave Jacobabad in the hottest months, leaving some villages half empty.
Sharaf Khatoon shares a makeshift camp in the city with up to 100 people surviving on a few meagre rupees that male family members earn through menial labour.
They usually relocate the camp in the hottest months, 300 kilometres away to Quetta, where temperatures are up to 20 degrees Celsius cooler.
But this year they will leave late, struggling to save the money for the journey.
"We have headaches, unusual heartbeats, skin problems, but there is nothing we can do about it," said Khatoon.
Professor Nausheen H. Anwar, who studies urban planning in hot cities, said authorities need to look beyond emergency responses and think long term.
"Taking heatwaves seriously is important, but sustained chronic heat exposure is particularly critical," she said.
"It's exacerbated in places like Jacobabad by the degradation of infrastructure and access to water and electricity which compromises people's capacity to cope."

Along a dried up canal filled with rubbish, hundreds of boys and a handful of girls in Jacobabad pour into a school for their end-of-year exams.
They gather around a hand pump to gulp down water, exhausted even before the day begins.
"The biggest issue we face is not having basic facilities—that's why we experience more difficulties," said headteacher Rashid Ahmed Khalhoro.
"We try to keep the children's morale high but the heat impacts their mental and physical health."
With extreme temperatures arriving earlier in the year, he appealed to the government to bring forward summer vacations, which normally begin in June.
A few classrooms have fans, though most do not. When the electricity is cut just an hour into the school day, everyone swelters in semi-darkness.
Some rooms become so unbearable that children are moved into corridors, with youngsters frequently fainting.
"We suffocate in the heat. We sweat profusely and our clothes get drenched," said 15-year-old Ali Raza.
The boys told AFP they suffered from headaches and frequent diarrhoea but refused to skip lessons.
Khalhoro said his students are determined to break out of poverty and find jobs where they can escape the heat.
"They are prepared as though they are on a battlefield, with the motivation that they must achieve something."
By Emma Clark and Ashraf Khan
© Agence France-Presse