India, the world's second-largest wheat producer, has banned exports of the grain with some exceptions, a move that could compound a worldwide shortfall worsened by the war in Ukraine and exacerbate an already dire forecast for hunger across the globe

By Sameer Yasir and Victoria Kim 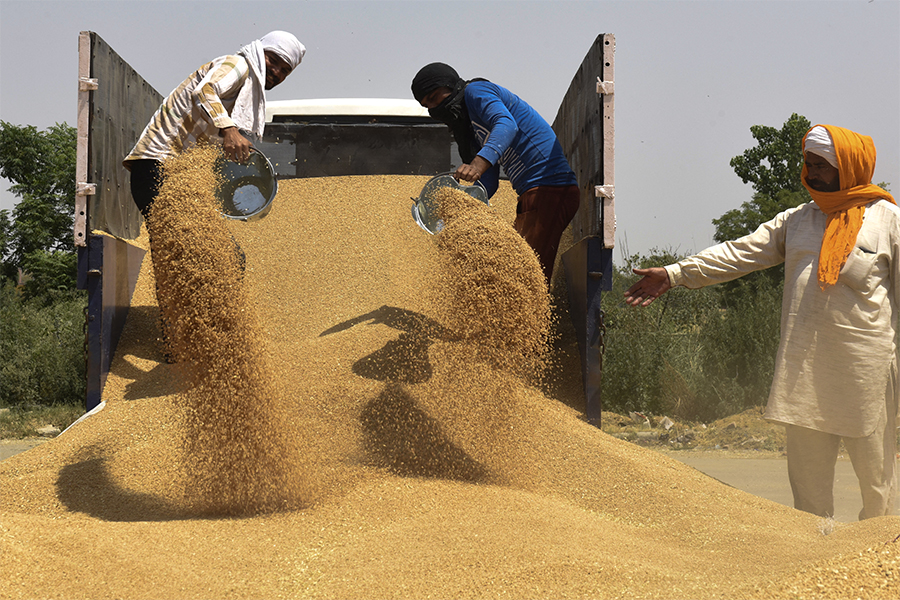 India that has about 10% of the world’s grain reserves has banned exports with some exceptions. Image: Narinder NANU/ AFPIndia, the world’s second-largest wheat producer, has banned exports of the grain with some exceptions, a move that could compound a worldwide shortfall worsened by the war in Ukraine and exacerbate an already dire forecast for hunger across the globe.
The war has interrupted wheat production in Ukraine and Russia, which are major suppliers. Fighting and blockades in the Black Sea have disrupted transport of the grain.
And poor harvests in China, along with a heat wave in India and drought in other countries, have further snarled global supply.
India has about 10% of the world’s grain reserves, according to data from the U.S. Department of Agriculture, a large surplus resulting from its heavy subsidizing of its farmers. It has been seen for months as a country that could help make up for global supply shortages.
The wheat-export ban, announced in a Commerce Ministry notice dated Friday, appeared to be an about-face from earlier statements from Prime Minister Narendra Modi. The Indian leader told President Joe Biden in April that the country was ready to supply the world from its reserves. He also urged domestic wheat producers to seize the opportunity, saying that Indian officials and financial institutions should support exporters.
But agricultural experts said an ongoing heat wave and rising temperatures could affect the harvest this year, which could be a factor in why the government changed course and imposed a ban on the exports.
The Commerce Ministry notice on Friday said wheat exports were immediately banned, with some exceptions, because a sudden spike in the crop’s price had threatened India’s food security. Limited exports will be allowed at the request of individual governments whose own food supply is vulnerable, the notice said.
The export ban could be a further blow to international organizations working to counter the increasing threat of widespread hunger. The World Food Program, a United Nations agency, has warned that an additional 47 million people could go hungry as the war’s ripple effects add to an existing crisis of steep increases in food prices and a fertilizer shortage.
In early May, the agency’s chief economist, Arif Husain, said it was in discussions with India to tap into its stockpile to alleviate the shortage. He also said that the World Food Program had urged nations not to enact export bans because they could raise prices and reduce availability. “Hopefully, countries are listening,” he said.
Ashok Gulati, a prominent agricultural economist in India, said the ministry’s announcement reflected poorly on India, given that it contradicted the government’s previous comments about wanting to supply wheat to countries in need.
“If there is a global surge, you can tame it by opening, rather than closing down, borders,” Gulati said.
The move is also likely to be unpopular among India’s farmers.
Ranbeer Singh Sirsa, a farmer in Punjab state, said the ban was likely to affect wheat farmers who had benefited recently from higher prices and demand.
“If the price wants to go up, let it settle at the international price,” Sirsa said. “Who are they trying to protect now, at the cost of farmers?”

Tweets by @forbesindia
Obituary: Pandit Shiv Kumar Sharma, master of Santoor, who made the instrument global
Binance denies participation in Terra's 2019 funding round