Over a career spanning nearly seven decades, Sharma became the first musician to propel the santoor onto the world stage, at concerts and recitals in India and elsewhere 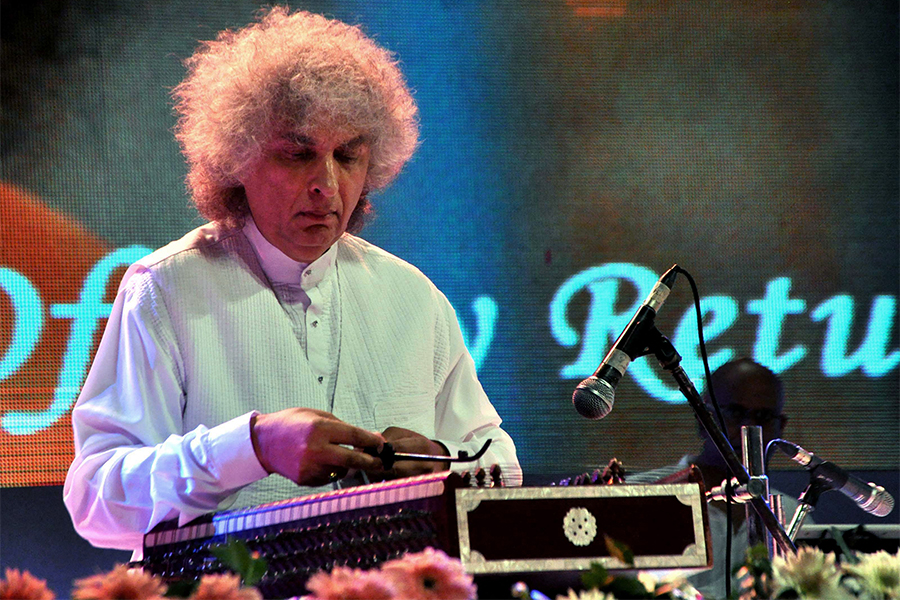 Pandit Shiv Kumar Sharma, an Indian musician and composer who was the foremost exponent of the santoor, a 100-string instrument similar to the hammered dulcimer, died Tuesday at his home in Mumbai. He was 84.
Indian news reports said the cause was cardiac arrest.
Over a career spanning nearly seven decades, Sharma became the first musician to propel the santoor onto the world stage, at concerts and recitals in India and elsewhere.
Before Sharma started playing the santoor, it was little known outside Kashmir. Even there it was used only to play Sufiana Mausiqi, a genre of Kashmiri classical music with Persian, Central Asian and Indian roots.
The santoor, a trapezoidal wooden instrument whose strings stretch over 25 wooden bridges, is played with slim wooden mallets. On the santoor, in contrast with the sitar, sarod or sarangi, the string instruments traditionally used in Hindustani classical music, it is difficult to sustain notes and perform the meends, or glides from one note to another, essential to the Hindustani musical tradition.
That might be one reason it took Sharma so many years to be recognized for his artistry.
At the beginning of his career, purists and critics derided the santoor’s staccato sound, and many urged Sharma to switch to another instrument. Instead he spent years redesigning the santoor to enable it to play more notes per octave, making it more suitable for the complex ragas, the melodic framework of Hindustani music.
“My story is different from that of other classical musicians,” Sharma told The Times of India in 2002. “While they had to prove their mettle, their talent, their caliber, I had to prove the worth of my instrument. I had to fight for it.”
He released several albums, beginning with “Call of the Valley” (1967), a collaboration with acclaimed flutist Pandit Hariprasad Chaurasia and guitarist Brij Bhushan Kabra.
Chaurasia and Sharma were close friends and frequent collaborators. Together they composed music for several successful Bollywood films in the 1980s and ’90s including “Silsila” (1981), “Chandni” (1989), “Lamhe” (1991) and “Darr” (1993). Sharma was one of the few Indian musicians who straddled the worlds of classical and popular music.
In 1974, Sharma performed across North America with sitar virtuoso Pandit Ravi Shankar as part of former Beatle George Harrison’s 45-show “Dark Horse” concert tour, bringing Indian classical music to audiences beyond South Asia alongside some of the finest classical musicians from India — Alla Rakha on tabla, Sultan Khan on sarangi, L.
Subramaniam on violin, T.V. Gopalakrishnan on mridangam and vocals, Chaurasia on flute, Gopal Krishan on vichitra veena and Lakshmi Shankar on vocals.
Sharma was awarded some of India’s highest honors, including the Sangeet Natak Akademi Award in 1986, the Padma Shri in 1991 and the Padma Vibhushan in 2001.
Shiv Kumar (sometimes rendered Shivkumar) Sharma was born Jan. 13, 1938, in Jammu, India, to Pandit Uma Devi Sharma, a classical musician who belonged to the family of royal priests of the maharajah of Jammu and Kashmir, and Kesar Devi. He began singing and tabla lessons with his father at the age of 5, showing great promise. In “Journey With a Hundred Strings” (2002), a biography of Sharma, Ina Puri wrote that he would spend hours immersed in music, practicing various instruments.
“There was an obsessive element in my attitude to music even then,” she quoted him as saying. “It was the air I breathed, the reason I lived.”
By age 12 he was an accomplished tabla player, regularly performing on Radio Jammu and accompanying leading musicians who visited the city. When he was 14, his father returned from Srinagar, where he had been working, with a present: a santoor.
Sharma was not happy about learning a new, unfamiliar instrument. But his father was adamant. “Mark my words, son,” he recalled his father saying. “Shiv Kumar Sharma and the santoor will become synonymous in years to come. Have the courage to start something from scratch. You will be recognized as a pioneer.”
In 1955, Sharma gave his first major public performance on the santoor, at the Haridas Sangeet Sammelan festival in Bombay (now Mumbai). The youngest participant at 17, he persuaded the organizers to allow him to play both the santoor and the tabla. He was reluctantly given 30 minutes to play the instrument of his choice, but on the day of the recital he played the santoor for a full hour — to rapturous applause. The organizers called him back for another recital the next day.
He soon received offers to play and act in Hindi films, but after one film, the 1955 hit “Jhanak Jhanak Payal Baje,” he was determined to focus on classical music. He performed around the country in an effort to establish the santoor as a classical instrument.
He moved to Bombay at 22; to make ends meet, he played the santoor on sessions for dozens of popular Hindi film songs while continuing to build his classical reputation.
He is survived by his wife, Manorama; his sons, Rahul, a well-known santoor player and composer, and Rohit; and two grandchildren.
After Sharma’s death, Prime Minister Narendra Modi was among those paying tribute. “Our cultural world is poorer with the demise of Pandit Shivkumar Sharma Ji,” he wrote on Twitter. “He popularized the santoor at a global level. His music will continue to enthrall the coming generations.”