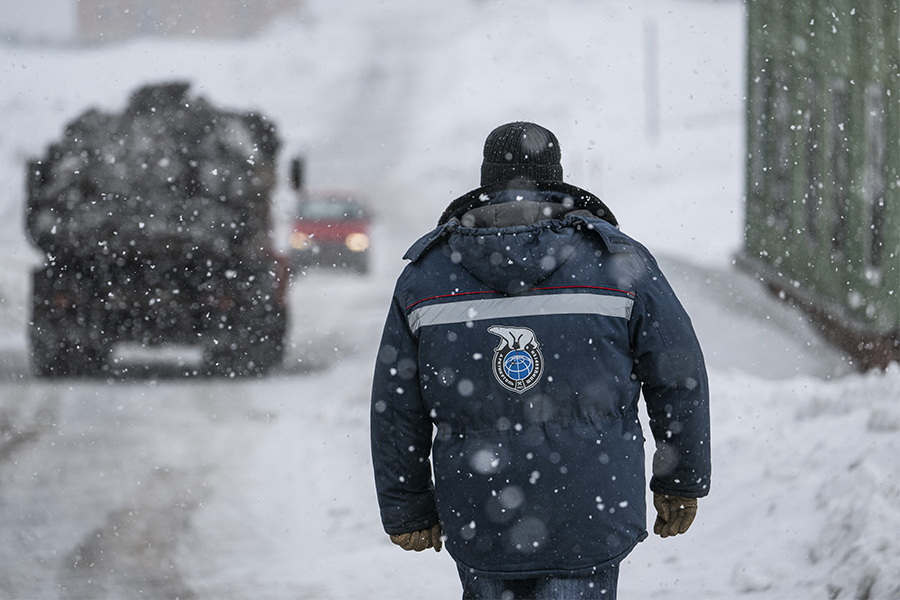 A man wearing an anorak with the logo of Arktikugol company on the back walks in the blizzard on May 7, 2022, in the miners' town of Barentsburg, on the Svalbard Archipelago, northern Norway.​ (Credits: Jonathan NACKSTRAND / AFP)

Barentsburg, Norway: War may be far away but tensions from the Ukraine conflict are causing an unprecedented chill in a remote Arctic town where Russian and Ukrainian coalminers have worked side by side for decades.
In Barentsburg, in Norway's Svalbard archipelago, relics of a bygone era—a bust of Lenin, a sculpture with Cyrillic script declaring "Our goal - Communism"—bear witness to Russia's longstanding presence.
The town's population peaked at around 1,500 in the 1980s, but shrank after the Soviet Union collapsed.
Now, some 370 people live here, two-thirds of them Ukrainians—most from the Russian-speaking eastern Donbas region—and the remainder Russians.

The atmosphere on the archipelago changed after Russia's invasion of Ukraine began in February, officials and residents told AFP.
"Opinions are absolutely polarised," admits Russian tour guide and historian Natalia Maksimishina.
But, she says, "what our long and difficult history of the Soviet Union has taught us is that people here know when to stop talking politics".
Some Ukrainians accuse the Russian state-owned company Arktikugol Trust operating the coal mine in Barentsburg of muzzling dissent.
But Russia's consul Sergey Guschin says there were "no visible signs of conflict on the surface", although he admits "there are of course some tensions and discussions on social networks" like Facebook and Telegram.
The consulate is protected by high iron bars and security cameras, and lavishly decorated with a marble entrance, winter garden and custom-made tapestries.
Its splendour stands out in the otherwise drab town.

In what could be another sign that anger is simmering under the surface, around 45 people have left Barentsburg "since the start of the operation", acknowledges Guschin, using Moscow's terminology for the Ukraine invasion.
There were no further details about the individuals.
The departures speak volumes, as leaving Barentsburg is no easy feat.
Western sanctions imposed on Russian banks have not only prevented the miners from sending money home to their families, they've also made it difficult for them to buy plane tickets.
The only airport is in Longyearbyen, Svalbard's main town 35 kilometres (22 miles) away, where it is difficult to get by without a Visa or Mastercard, which Russians cannot use because of sanctions.
At the entrance to Barentsburg, the coal plant spews out black smoke, adding to the town's dreary atmosphere.
A 1920 treaty which gave Norway sovereignty over Svalbard guarantees citizens from signatory nations equal access to its natural resources.
Russia's Arktikugol Trust has operated the mine in Barentsburg, on the shores of the Isfjorden fjord, since 1932.
A few locals huddle between the town's pastel-coloured buildings, seeking shelter from the bitter cold that reigns even in May.
Locals are more discreet today, especially since they work for the state-controlled company that runs the whole town, from the mine to the shops and restaurants.
Russia imposes heavy fines or even prison terms on anyone found guilty of "discrediting" its military or publishing "false information" about it.

Longyearbyen is inhabited mainly by Norwegians but has a large Russian and Ukrainian community.
It can only be reached by helicopter or snowmobile in winter and boat in summer due to lack of roads from Barentsburg.
Julia Lytvynova, a 32-year-old Ukrainian seamstress who used to live in Barentsburg, accuses Arktikugol Trust of suppressing dissent.
As a result, "people just shut up, work and live their lives like nothing has happened".
She hasn't been back to Barentsburg since the war started, but she asked a friend to put up an anti-war poster for her on the gates of the Russian consulate.
Her sign, written on a blue-and-yellow background, had a now-famous expletive-laden line used by Ukrainian border guards after rejecting a Russian warship's surrender demand.
Her poster was taken down in less than five minutes, she says.
The mayor of Longyearbyen, who has lived in Svalbard for 22 years, says he has "never experienced the kind of discord" now seen among the 2,500 residents of 50 nationalities, including around 100 Russians and Ukrainians.
"There are some tensions in the air," Arild Olsen admits.
In response to the invasion, most tour operators in Longyearbyen stopped taking tourists to Barentsburg, depriving the state-owned company of a lucrative cash cow.
Lytvynova supports the move "because this money supports the Russian aggression".
By ending this source of income, "they don't help to kill my Ukrainian people".
By Pierre-Henry DESHAYES
© Agence France-Presse

Tweets by @forbesindia
Tailor-made SaaS will emerge from India for the world: Blume Ventures' Anirvan Chowdhury
International Day of Biological Diversity 2022: Not all urban greenery is created equal