The Russian invasion and war that followed has triggered an outpouring of Ukrainian patriotism, drawing a clear distinction between the lives they led before the conflict and the spirit and unity they have felt in its wake 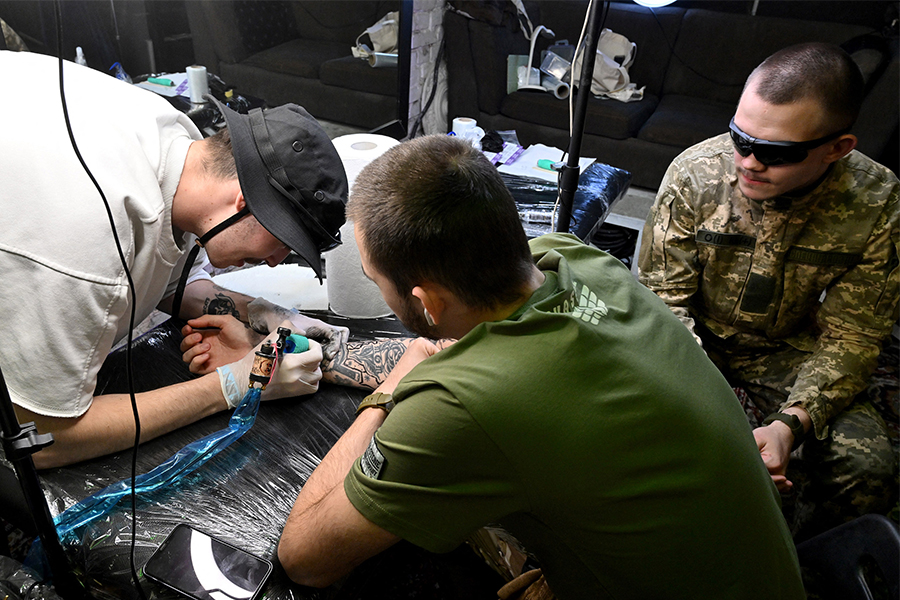 Ukrainian servicemen get tattoos during the “Art Weapon” festival in Kyiv on May 14, 2022. Image: Sergei SUPINSKY / AFP

From odes to embattled military units to expressions of love for the motherland, Ukrainians are embracing tattoos amid the ongoing war with Russia.

At the "Art Weapon" festival, dozens chose to show their love for their nation by getting inked, with payments for the tattoos going straight to the Ukrainian military as donations.

The event took place at an abandoned Soviet-era factory on Saturday, where droning electronica clashed with crunchy garage rock and the buzzing sound of tattoo needles.

A 20-year-old soldier, who spoke on condition of anonymity, was getting inked for the first time.

His new tattoo was dedicated to Ukraine's Azov regiment and the group's fighters—many of whom are under attack at a steel plant in the besieged port city of Mariupol, including two of his friends.

"It's very difficult for me, but I can't imagine what they feel," he told AFP as he prepared to go under the needle. "They told me they will stand for Ukraine until they die."

For actress and musician Marusia Ionova, 27, her new tattoo—which simply says "Kyiv"—serves as a reminder of the time when she was forced to flee her home at the beginning of the war and the wave of emotions she has felt since.

"That's why I decided to get the name of my favourite city in the world," she said.

"The level of emotions are so different... it's really hard to explain," she said of her new-found connection with Ukraine following the outbreak of the war.

Tattoo artist Zhenia, 27, said he had seen a major uptick in requests for patriotic tattoos from customers, including from many first-timers.

"The war changed them and they started getting tattoos. And their first tattoos are patriotic ones," he added.

These include chest-sized Ukrainian tridents and more brazen slogans like "death to the enemy".

The Russian invasion and war that followed has triggered an outpouring of Ukrainian patriotism, drawing a clear distinction between the lives they led before the conflict and the spirit and unity they have felt in its wake.

Since the war began, large swathes of the population have voluntarily offered their services to Ukraine's war effort—from making Molotov cocktails to weaving camouflage nets and making donations en masse to the country's armed forces.

"It's a new feeling that came when the war started—it's an intense emotion," said Anastasia, an 18-year-old economics student while getting the Ukrainian trident tattooed on her lower back—a decision she made only yesterday.

"It is very important to me to have it," she added.