Hundreds of residents decided to stay back in the village, though many others fled after two months of war. The last ones to remain are the poorest and most vulnerable, often the oldest, and those whose only riches come from the earth 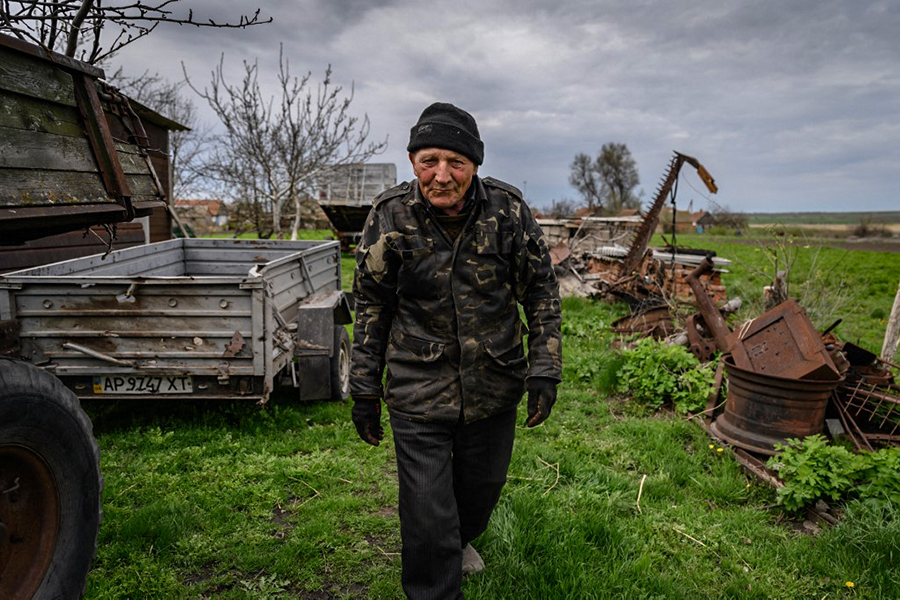 Vasili Kushch walks through a farmyard amid the sound of regular nearby shelling, in the village of Mala Tokmatchka which he refuses to leave saying he has nowhere to go and that no one will take him because he is a farm worker, near the southern front of fighting between Ukrainian and Russian forces, south of Zaporizhzhia on April 23, 2022. (Credit: Ed JONES / AFP)

Mala Tokmachka, Ukraine: Standing in front of the home of his boss recently hit by a bomb in southern Ukraine, Vassili Kushch never wavers in his commitment to the land, picking up his shovel and getting to work.
"I must work. I don't have anywhere else to go," labourer Kushch, 63, says in the village of Mala Tokmachka, 70 kilometres (43 miles) southeast of Zaporizhzhia.
The village, only a few kilometres from the invisible line separating Moscow's troops from Kyiv's forces, wakes up every night to Russian rockets splitting the sky and discovers the disastrous consequences every morning.
Russian strikes mangled the metal fence belonging to Kushch's boss. Several windows in his old tractors, parked in the garden, have shattered.
Rubble litters the ground. The small bomb responsible for the damage has gouged a hole in the ground, right in front of the home.

Kushch doesn't hold his words back for the "Russian bastards" who destroy his village but soon lifts his shovel once more.
On the other side of the road, another bomb destroyed a red-brick building.
"The neighbour was in the kitchen. She left to hide in the fields," Kushch says, before adding: "Thank God, the cow is still alive."
Kushch is one of hundreds of residents who decided to stay in the village, though many others fled after two months of war.
The last ones to remain are the poorest and most vulnerable, often the oldest, and those whose only riches come from the earth.
Kushch doesn't have much. The army jacket he wears was "given by a prison guard", his loose trousers "date back to the Soviet era" and he lives in a small room, which "shakes" every time Russians strike.

'Can survive with milk'

"It's like I'm naked," sighs the former driver, who has been doing odd jobs for 30 years. "I don't have money to buy anything."
Kushch, a divorced father of five who is not in contact with his children, would like to "bury alive" the "katsap", a pejorative term used to refer to Russians.
But he knows he doesn't have any chance against Moscow's forces with just his shovel and so he remains in Mala Tokmachka.
"If we don't sow the potatoes, we will have none to harvest. Same for onions. And so the cows will die of hunger," he says with evident fear, rolling a cigarette with tobacco he has grown himself.
It would be a similar tragedy for a man whose parents, born in 1927, experienced the great famine of 1932-33, and another in 1946-47.
Kyiv has vigorously campaigned for the Stalin-era famines on its territory in the 1930s — known as the Holodomor — to be recognised as genocide.
These tragedies taught him one thing: "You can't just live on water, but you can survive with milk."
Olga Tus, who hosts Kushch, accuses him of being "a drunkard", adding: "When he drinks, we don't approach him. Otherwise, it's OK."

But the 60-something hardy woman, who ties her hair under a magenta scarf, shares two cardinal values in rural Ukraine with Kushch.
The first is a hatred of Russians — Tus worked in Moscow for 20 years and described Russians as "swines".
The second is the commitment to the land and to sow seeds because, as the local saying goes, "when the flowers start to bloom, everything ends".
Tus wants to believe that the war "will end soon" and doesn't "even consider for a second" that Russian troops can take Mala Tokmachka, despite the sounds of rockets rumbling above.
A bet that the "rich" clearly did not believe in, having fled the village, in contrast with the "poor" who stayed, according to Tus.
For several days, AFP observed many convoys of combine harvesters and other gleaming tractors on the secondary roads leading to Zaporizhzhia, a large city still under Kyiv's control.
Yuri, head of the territorial defence of Mala Tokmachka, says "it's to prevent these machines being looted by Russians".
Natalia Bouinitskaia and her husband, Guennady, have other concerns.
The couple cannot leave because of Natalia's mother, Vera Dounda, who wishes to die in the village where she was born.
"I'm scared when it shakes too strongly. So, I lie down and I look at the window," the 84-year-old says, who can no longer walk "not because of an illness but because of age".
Dounda thinks of a future without war, or of her glorious past, when she could "run, run, run", without any bombs to flee.
By Joris FIORITI and Antoine DEMAISON
© Agence France-Presse