On Wednesday, Moscow issued another call for the city's defenders to surrender. But that ultimatum passed and Ukrainian forces have stood firm, holing up in the sprawling Azovstal steel plant — also a refuge for up to 2,000 civilians 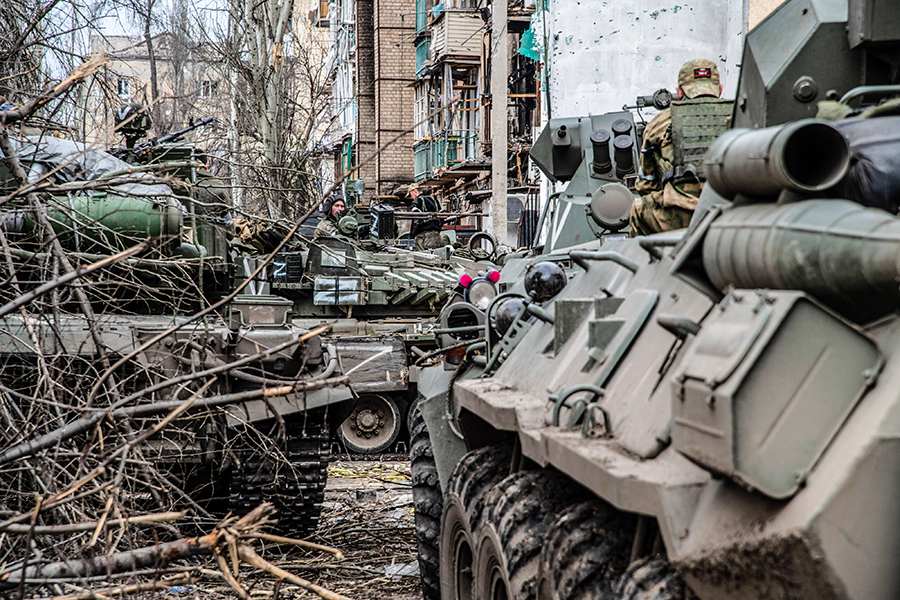 Russian/ pro-Russian armour gathers in eastern Mariupol for an assault on the Azovstal plant where fierce fighting continues. The battle between Russian / Pro Russian forces and the defending Ukrainian forces led by the Azov battalion continues in the port city of Mariupol. (Credit: Maximilian Clarke/SOPA Images/LightRocket via Getty Images)

Zaporizhzhia, Ukraine: Ukraine's last defenders in devastated Mariupol are refusing to surrender, but have appealed for security guarantees with Russian forces on the brink of taking complete control of the strategically vital city.
Mariupol has been under siege almost since the invasion began, with widespread shelling laying waste to swathes of the port city and forcing most of its 450,000 people to flee.
On Wednesday, Moscow issued another call for the city's defenders to surrender.
But that ultimatum passed and Ukrainian forces have stood firm, holing up in the sprawling Azovstal steel plant — also a refuge for up to 2,000 civilians, according to an adviser to the city's mayor. AFP could not independently confirm the number.
They described a "horrible situation" in the encircled complex, reporting that the trapped civilians — mostly women and children — are without drinking water, food and fresh air.

A Ukrainian commander in the plant issued a desperate plea for help Wednesday, accusing the Russians of failing to follow through on promises to allow civilians safe passage out of the city.
"I want to call upon all the civilised world to join security guarantees," deputy commander of the far-right Azov Regiment, Captain Sviatoslav Palamar, said in a statement, adding civilians inside the plant were "scared due to constant shelling".
"We are pleading so we can collect the bodies of the dead, so the civilians can calmly walk out from Azovstal."
Mariupol has become a symbol of Ukraine's unexpectedly fierce resistance since Russian troops invaded the former Soviet republic on February 24.
Capturing it would give Russia a land bridge between the Crimean peninsula, which it annexed in 2014, and the two Moscow-backed separatist statelets in Ukraine's east.

'We are with you'

As fighting raged in Ukraine's east and south, European Council leader Charles Michel visited Kyiv and vowed the EU would do "everything possible" to help the country win the war.
"You are not alone. We are with you," Michel said during a press conference alongside Ukrainian President Volodymyr Zelensky.
Zelensky said his country still did not have enough weapons to resist the invasion, despite billions in military aid from Western allies — though in a video message he added his partners "understand our needs better."
Ahead of Michel's arrival, the Pentagon said Ukraine had received fighter planes to bolster its air force — but it later corrected that statement, saying only aircraft parts had been delivered.
Washington has repeatedly vowed to do everything it can to help Kyiv without igniting a direct conflict with nuclear-armed Russia.
On Wednesday, US President Joe Biden said he has been "amazed" by Ukrainian resistance.
"They're tougher and more proud than I thought," he said, adding that Western "weapons and ammunition are flowing in daily".
He said NATO remains "united, focused and energized," adding: "I don't think Putin counted on it."
And in a further sign of the mounting pressure on Moscow, Wimbledon said it would ban Russian and Belarusian players from the 2022 tournament in response to the country's February invasion of Ukraine.
The All England Lawn Tennis Club (AELTC), which runs Wimbledon, said it was acting to "limit Russia's global influence through the strongest means possible".
And at a meeting of G20 finance ministers, the United States led a multinational group in a walkout as Russian officials spoke.
British and Canadian officials also took part in the boycott, officials confirmed, underscoring the stark geopolitical faultlines at a gathering convened to address global challenges such as rising debt and a possible food crisis.

More than five million Ukrainians have now fled their country since the Russian invasion, the United Nations said Wednesday, in Europe's fastest-growing refugee crisis since World War II.
Those returning home must often take huge risks.
In the pummeled Ukrainian village of Moshchun, locals trickling back must effectively sign away their lives for permission to enter.
In order for residents to visit their burned, bombed and looted houses, they have to accept, in the form of a waiver, the risk of death or maiming by remnants of the invasion they had at least initially escaped.
"They say they did some de-mining. We found a booby trap in our garden. It seems it was disarmed, we don't know," said resident Olena Klymenko, whose home was destroyed. "Still, we need to look for our stuff."
And many have fled into neighbouring Russia, where the International Committee of the Red Cross last month said it was planning to open a branch in the southern Rostov region.
But Kyiv on Wednesday accused the ICRC of working "in concert" with Moscow to help the refugees, who it says have been forcibly deported to Russia.
Citing data from the UN, Ombudswoman Lyudmyla Denisova said that about 550,000 Ukrainians, including 121,000 children, have been taken to Russia during the course of the war, but Kyiv has no information on who these people are and where they are being kept.
"Where are they? In filtration camps? In temporary facilities?" Denisova asked.
"The International Red Cross is not fulfilling its mandate."
The ICRC strongly rejected Kyiv's accusations.

Russia said Wednesday its forces had launched 73 air strikes across Ukraine, hitting dozens of locations where Ukrainian troops were concentrated.
In eastern Ukraine's Kramatorsk, a large city in the Donetsk region, residents were bracing for the worst.
"It's going to be a mess," said Alexander, 53. "There's nothing good to expect."
Further from the frontlines, residents were still reeling weeks after Russian forces withdrew from the area near Kyiv.
At a morgue in Bucha, families carefully searched body bags and examined cadavers looking for missing loved ones.
Four hundred bodies have been discovered there since the Russians withdrew on March 31, local police chief Vitaly Lobas told AFP. Around a quarter of them are still unidentified.
Ukrainian authorities have said more than 1,200 bodies have been found in the Kyiv region so far.
Putin has said he launched his country's so-called military operation in Ukraine to save Russian speakers there from a "genocide" carried out by a "neo-Nazi" regime.
But his forces have faced allegations of war crimes — most recently from the EU's Michel, who toured the devastated town of Borodianka on Wednesday.
"History will not forget the war crimes that have been committed here," Michel wrote on Twitter.
By Joris Fioriti, with Anatoly Stepanov in Kramatorsk
© Agence France-Presse