Ukraine's war's geographic reality: Russia has seized much of the East

The prospect that Russia could soon gain complete control over the Donbas region has strengthened, compared with one-third of it before the February 24 invasion 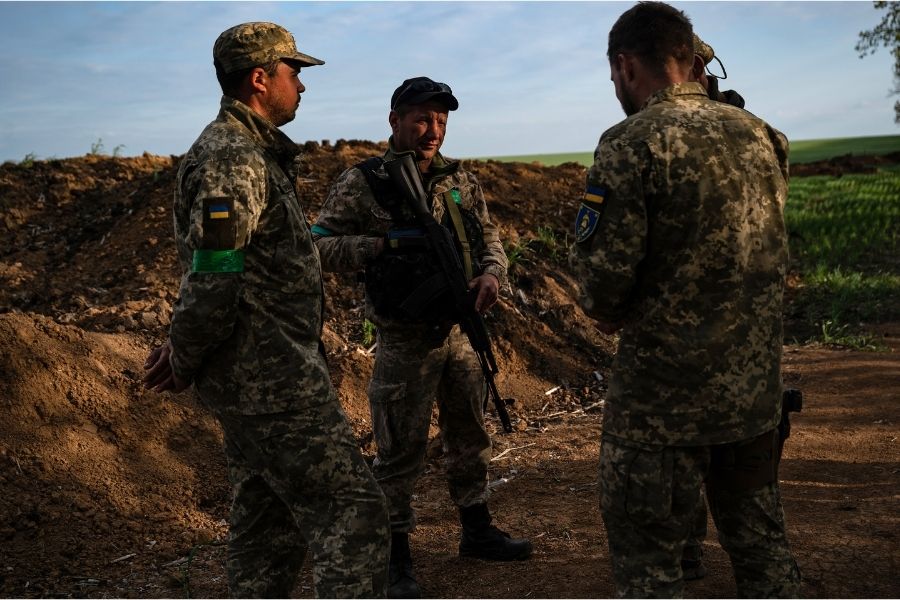 Soldiers with the Ukrainian Territorial Defense Forces in the Zaporizhzhia region in southeast Ukraine on Sunday, May 1, 2022. While Moscow failed in in its initial, sweeping objectives, Russian forces have seized a wide swath of southern Ukraine. Image: Lynsey Addario/The New York Times

POKROVSK, Ukraine — Russia’s nearly 3-month-old invasion of neighboring Ukraine has been punctuated by flawed planning, poor intelligence, barbarity and wanton destruction. But obscured in the daily fighting is the geographic reality that Russia has made gains on the ground. The Russian Defense Ministry said Tuesday that its forces in eastern Ukraine had advanced to the border between Donetsk and Luhansk, the two Russian-speaking provinces where Moscow-backed separatists have been fighting Ukraine’s army for eight years. The ministry’s assertion, if confirmed, strengthens the prospect that Russia could soon gain complete control over the region, known as the Donbas, compared with one-third of it before the Feb. 24 invasion. That is a far cry from what appeared to be the grand ambitions of President Vladimir Putin of Russia when he launched the invasion: quick and easy seizure of vast swaths of Ukraine, including the capital, Kyiv, the overthrow of a hostile government and a replacement with unquestioned fealty that would ensure Ukraine’s subservience. Nonetheless, the Donbas seizure, combined with the Russian invasion’s early success in seizing parts of southern Ukraine adjoining the Crimean Peninsula, which Russia illegally annexed in 2014, gives the Kremlin enormous leverage in any future negotiation to halt the conflict. And the Russians enjoy the added advantage of naval dominance in the Black Sea, the only maritime route for Ukrainian trade, which they have paralyzed with an embargo that could eventually starve Ukraine economically and is already contributing to a global grain shortage. Testifying before the Senate Armed Services Committee in Washington on Tuesday, Avril Haines, the director of national intelligence, warned of a “prolonged conflict” in Ukraine as Russia seeks expansive territorial gains beyond the Donbas region, including the creation of a land bridge across Ukraine’s Black Sea coast. But Haines cautioned that Putin would struggle to achieve those gains without a large-scale mobilization or draft, which he appears reluctant to order for now. As Putin’s territorial ambitions conflict with the limited capabilities of his military, Haines said that the war could enter “a more unpredictable and potentially escalatory trajectory” over the next few months, increasing the likelihood of Putin issuing direct threats to use nuclear weapons. For the past several weeks, Ukrainian and Russian troops have been engaged in a grueling attrition, often fighting fiercely over small areas, as one village falls into Russian hands on one day, only to be retaken by the Ukrainians a few days later. The Ukrainians are increasingly dependent on an infusion of Western military and humanitarian aid, much of it from the United States, where the House voted Tuesday evening to approve a nearly $40 billion emergency package. “The Russians aren’t winning and the Ukrainians aren’t winning, and we’re at a bit of a stalemate here,” said Lt. Gen. Scott Berrier, director of the Pentagon’s Defense Intelligence Agency, who testified alongside Haines. Still, Russia has all but achieved one of its primary objectives: seizing a land bridge connecting Russian territory to the Crimean Peninsula. When Putin ordered the invasion, some of his military’s most skilled fighters poured out of Crimea and southern Russia, quickly seizing a ribbon of Ukrainian territory along the Sea of Azov. The last stronghold of Ukrainian resistance in this area, at the Azovstal steel plant in Mariupol, has been whittled to a few hundred hungry troops now confined mostly to bunkers.

But efforts by Russian forces to expand and fortify the land bridge have been complicated by Ukrainian forces deployed along an east-west front that undulates through sprawling fields of wheat and occasionally engulfs villages and towns.Although Russian artillery and rockets have wreaked havoc in residential areas, flattening houses and terrorizing locals, the Russian military has not committed enough forces to move the line significantly or threaten the major industrial hub of Zaporizhzhia, the largest city near the front line, Col. Oleg Goncharuk, commander of the 128th Separate Mountain Assault Brigade, said last month. “They will try to block our forces from moving forward and they are trying to solidify their positions,” said Goncharuk, whose forces are arrayed along the southeast front. “But we don’t know their orders or what their ambitions are.”It is in the eastern provinces of Donetsk and Luhansk where fighting is the fiercest. At the main hospital in Kramatorsk, a city in Donetsk, ambulances stream in day and night, carrying soldiers wounded at the front, who describe being pinned down by near constant shelling.About 80% of the patients are wounded by explosives such as mines and artillery shells, said Capt. Eduard Antonovskyy, deputy commander of the medical unit at the hospital. Because of this, he said, few patients have serious injuries. Either you’re far enough from an explosion to survive or you aren’t, he said. “We either get moderate injuries or deaths,” Antonovskyy said.Russian forces now control about 80% of the Donbas, according to Ukrainian officials, and have concentrated their efforts on a pocket of Ukrainian-held territory with Kramatorsk at its center. All around the city, the booms of distant fighting can be heard at all hours, and heavy smoke hangs like a morning fog. Almost daily, Russian forces launch rocket attacks and airstrikes on the city itself, but the most punishing violence is reserved for those places in range of Russian artillery. About 62 miles northeast of Kramatorsk is Severodonetsk, where Russian artillery, parked about 5 or 6 miles outside the city, rarely relents, making it difficult for the 15,000 or so residents who remain to venture above ground.Oleg Grigorov, police chief in the Luhansk region, compared the violence with the Battle of Stalingrad in World War II, when Soviet forces turned the tide against the Nazis, but only after having suffered tremendous losses. “It never ends. At all,” Grigorov said. “Whole neighborhoods are destroyed. For days, for weeks, they have been shelling. They are intentionally annihilating our infrastructure and the civilian population.” Grigorov said about 200 of his officers remained in the city, which has lost electricity and water. Their primary task is delivering food to people sheltering in their basements and burying the dead.Russia’s Black Sea blockade of Ukraine has not diminished the Kremlin’s desire to gain control of Odesa, the most important Ukrainian port, which has been subjected to several aerial attacks. In the latest, Russian forces fired seven missiles, striking a shopping mall and a consumer goods warehouse and killing at least one person and wounding several more, Ukrainian officials said. The strike came only hours after European Council President Charles Michel had visited Odesa, where he was forced to take cover in a bomb shelter because of another attack. Michel, who met with Prime Minister Denys Shmyhal of Ukraine, criticized Russia for strangling Ukrainian grain exports that feed people around the world. “I saw silos full of grain, wheat and corn ready for export,” Michel said in a statement. “This badly needed food is stranded because of the Russian war and blockade of Black Sea ports, causing dramatic consequences for vulnerable countries.” President Volodymyr Zelenskyy of Ukraine urged the international community to pressure Russia to lift the blockade. “For the first time in decades there is no usual movement of the merchant fleet, no usual port functioning in Odesa,” he said in an overnight address. “Probably, this has never happened in Odesa since World War II.” Ukraine’s economy is expected to shrink 30% this year, the European Bank for Reconstruction and Development said Tuesday, worsening its forecast from two months ago, when it predicted a 20% shrinkage. The war has “put Ukraine’s economy under enormous stress, with the heavy devastation of infrastructure and production capacities,” the bank said in an economic update. It estimated that 30% to 50% of Ukrainian businesses have shut down, 10% of the population has fled the country and a further 15% is displaced internally. The bank also forecast that Russia’s economy would shrink by 10% this year and stagnate next year, with a bleak outlook unless a peace agreement leads to the relaxing of Western sanctions.