The information war in Ukraine is far from over

Ten weeks into the war, many Russians seem to accept Putin's narrative. Around the world, many countries remain on the sidelines or, like China, are on Russia's side 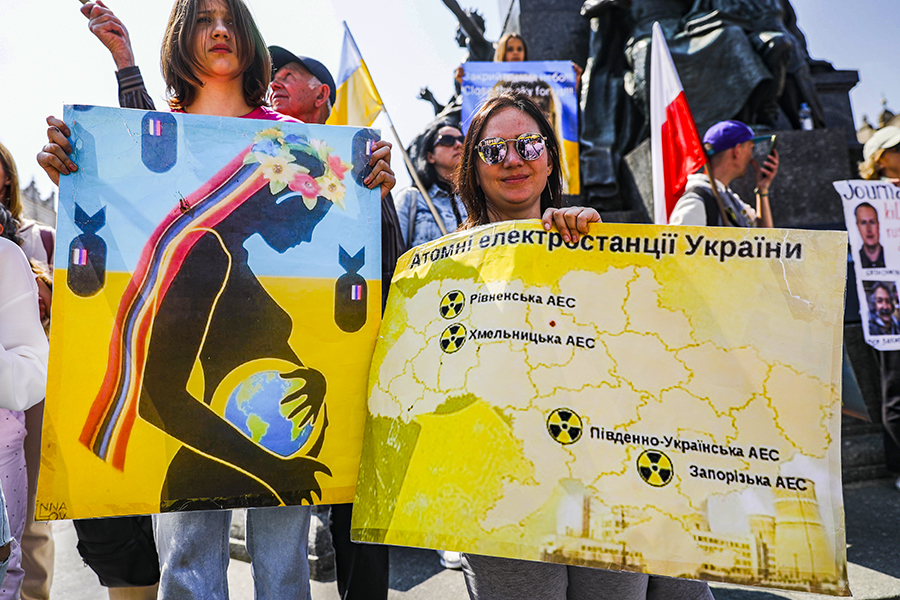 Ukrainian citizens and supporters attend a demonstration of solidarity with Ukraine at the Main Square, demanding NATO to close the sky for Russian planes over the territory of Ukraine following Russian invasion. Krakow, Poland on May 2nd, 2022. (Photo by Beata Zawrzel/NurPhoto via Getty Images)

If the first casualty of war is truth, then the corollary in Ukraine is that information is the first battlefield.

That was where the war began, in early 2022, weeks before Vladimir Putin sent the first rockets, armored vehicles and troops into Ukraine, when he claimed that the massive buildup of troops along Ukraine’s borders was but another military exercise. And that was where the United States and its allies scored their first victories, when they made public intelligence anticipating the invasion and the pretext Putin would use for it.

Then, when the invasion began in February, Ukraine’s president, Volodymyr Zelenskyy, opened a second information front. He donned a soldier’s olive-drab T-shirt and issued a torrent of defiant tweets, speeches and images from devastated villages, much of it targeted at Russian audiences. His metamorphosis from a relatively unpopular president to a David defying Goliath has been instrumental in solidifying popular, military and economic support for Ukraine in the United States and Europe.

In these first information battles, the Americans and Ukrainians showed that they had learned the lessons of 2014, when Russia had the upper hand in propaganda, assaulting Crimea and eastern Ukraine while claiming to be responding to pleas from Russian-speaking residents. The United States and Ukraine have also been greatly aided this time around by the fact that the evidence of the invasion and its brutal consequences has been so well documented.

But the information war, like the physical war, is far from decided. Ten weeks into the war, many Russians seem to accept Putin’s narrative. Around the world, many countries remain on the sidelines or, like China, are on Russia’s side. While Washington’s public comments have served to bolster the Ukrainians and rally their allies, some of those comments have played directly into Putin’s claims of a malign America determined to neuter Russia, as when President Joe Biden said of Putin, “This man cannot remain in power,” and Defense Secretary Lloyd Austin declared that America’s goal is a “weakened” Russia.

Russia was surprisingly slow to prepare its population or the world for a full-scale invasion, perhaps because its leaders were convinced that Kyiv would fall quickly. But after that slow start, the Kremlin went into high gear. Domestically, it shut down independent media outlets, quashed demonstrations and threatened anyone challenging the government line with “false information” about the invasion with up to 15 years in prison.

Russia was also quick to adapt its messaging to a changing battlefield. After Moscow shifted its focus from Kyiv to southeastern Ukraine, the goal of driving Nazis out of power in Kyiv shifted to a focus on Ukraine as an existential struggle for Holy Russia against an American hegemon and its NATO sidekicks. What began as a “special military operation” has morphed into a defensive war akin to World War II, the “Great Patriotic War,” in which Russia was last compelled to defend itself against Nazis and fascists.

The info war has also reached Asia, Africa and South America, where Russia has mobilized diplomats and state-controlled media like the global RT network to press its case. The goal isn’t necessarily to win support, but to keep unaligned countries on the sidelines. While some countries, most notably China, have taken Russia’s side, others, like India, have avoided antagonizing Russia so as not to lose Russian military or energy contracts.

Many others have done so simply because they know and care little about Ukraine. Russia’s line to them is that it is fighting to prevent the United States from creating a unipolar world that would swallow their country, with no one to support their interests. The strategy evoked memories of the assistance the Soviet Union gave to Vietnam, Angola and other postcolonial independence movements.

The United States has mounted its own diplomatic efforts to gain more support from countries like India and South Africa. And Ukraine recently posted a video on Twitter in which the commander of Ukrainian armed forces thanks 37 countries that, according to the tweet, have shown “assistance and unwavering support in these hard times.” The list is not entirely fair — some Asian countries missing from the list have provided nonlethal assistance — but it is still noteworthy that there were no entries from Africa or South America.

As the war rages on, attention in the United States and elsewhere is bound to flag, and questions about the effect of the war on energy and food prices worldwide are bound to intensify. A speech by Biden on Tuesday on the need to support Ukraine was lost in the brouhaha over the leak of a Supreme Court draft ruling. And the $33 billion he is seeking in military assistance and other aid for Ukraine is certain to meet resistance, especially since there is no idea when or how the war might end.

Dwindling Western commitment is part of Putin’s calculus. Though he seems to have misjudged the West’s fury and response to his invasion, his 22 years of increasingly autocratic rule have taught him that passions invariably wane and high costs erode commitment.

As a former KGB agent, Putin sees the world as a battleground of conspiratorial maneuvers. In his speeches, the color revolutions in Ukraine and other former Soviet republics and the Arab Spring and other global upheavals are machinations to bolster American domination. As an heir to the Soviet worldview, he believes more than many Western leaders do in the importance of information warfare, both to give his regime a veneer of legitimacy and to challenge liberal democracy. On this battlefield, lies are ammunition in Putin’s long and increasingly personal struggle to stay in power.

Tweets by @forbesindia
'Top Gun' gets 'evolution' in sequel 36 years on, says Tom Cruise
How companies are making work from office attractive