As the war nears its third month, Azovstal has become emblematic of the fierce Ukrainian resistance that has repelled the Russian invasion far more effectively than most initially expected, and forced President Vladimir Putin to recalibrate his military aims from taking the capital Kyiv to focussing on the east of the country 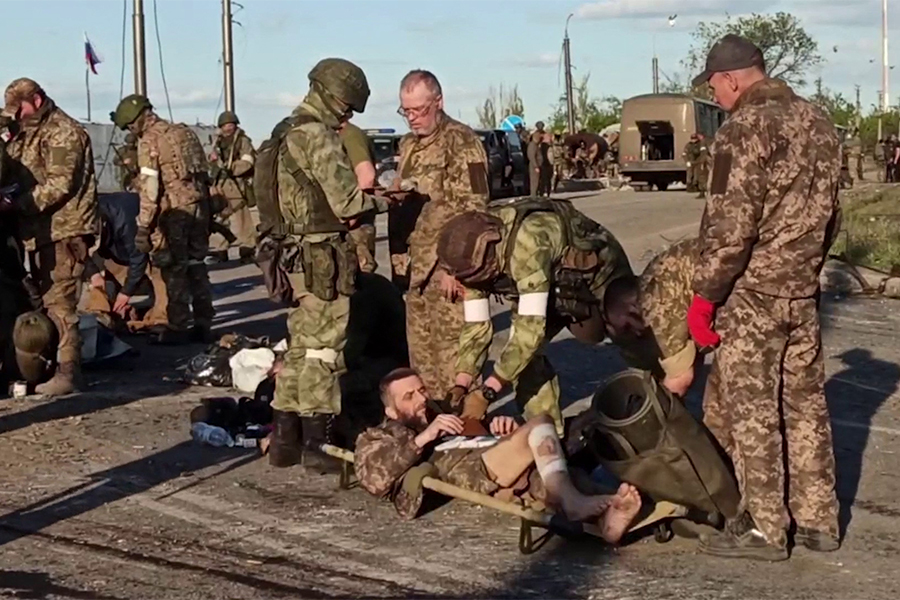 Kyiv, Ukraine: Ukraine was seeking to evacuate the last soldiers holed up at the Azovstal steelworks in Mariupol on Wednesday, its president said, as the first war crimes trial of a Russian soldier since the invasion began was set to get under way in Kyiv.On the international stage, Finland and Sweden were expected to formally submit a joint application to join the NATO military alliance, a historic reversal of their traditional policy of non-alignment.
As the war nears its third month, Azovstal has become emblematic of the fierce Ukrainian resistance that has repelled the Russian invasion far more effectively than most initially expected, and forced President Vladimir Putin to recalibrate his military aims from taking the capital Kyiv to focussing on the east of the country.
A unit of soldiers had been holding out in the Mariupol plant's underground maze of tunnels, stalling Russia's progress through surrounding territory, but on Tuesday Moscow said more than 260 had now surrendered.
Kyiv's defence ministry said it would do "everything necessary" to rescue the undisclosed number of personnel still in the steelworks, but admitted there was no military option available.
"The evacuation mission continues, it is overseen by our military and intelligence," Ukrainian President Volodymyr Zelensky said in his nightly address. "The most influential international mediators are involved."
His adviser Oleksiy Arestovich said they would not comment further while the operation was ongoing, in an interview with local television.

"Everything is too fragile there and one careless word can destroy everything," he said.
Those who have left Azovstal were taken into Russian captivity, including 51 who were heavily wounded, the Russian defence ministry said.
The ministry, which published images showing soldiers on stretchers, said the injured were transported to a hospital in the eastern Donetsk region controlled by pro-Kremlin rebels.
The defence ministry in Kyiv said it was hoping for an "exchange procedure... to repatriate these Ukrainian heroes as quickly as possible".
But their fate was unclear, with Kremlin spokesman Dmitry Peskov refusing to say whether they would be treated as criminals or prisoners of war.
Putin "guaranteed that they would be treated according to the relevant international laws," Peskov said.

However, Russian forces have been accused of committing a multitude of war crimes since the invasion began.
On Wednesday a 21-year-old soldier will go on trial in Kyiv in the first attempt to prosecute the alleged abuses.
Vadim Shishimarin, from Irkutsk in Siberia, is accused of shooting an unarmed civilian and faces a possible life sentence.
Prosecutors said Shishimarin was commanding a unit in a tank division when his convoy came under attack.
He and four other soldiers stole a car and were travelling through the Sumy region when they encountered a 62-year-old man on a bicycle.
Ordered by one of his companions to kill the cyclist, Shishimarin fired a Kalashnikov assault rifle from the window of the vehicle and "the man died instantly, a few dozen metres from his home", the statement said.
The trial, expected to be followed by several others, will test the Ukrainian justice system at a time when international institutions are also conducting their own investigations into alleged war crimes.
The International Criminal Court said Tuesday it was deploying its largest-ever field team to Ukraine, with 42 investigators, forensic experts and support staff being sent into the field to gather evidence of alleged atrocities.
The US State Department also announced it was creating a special unit to research, document and publicise Russian war crimes.
The Conflict Observatory will "capture, analyse, and make widely available evidence of Russia-perpetrated war crimes and other atrocities in Ukraine," the department said Tuesday.

The investigations are just one aspect of how a broad coalition of Western nations has been galvanised in support of Ukraine.
In a phone call Tuesday, French President Emmanuel Macron told Zelensky that arms deliveries from Paris would "increase in intensity" in the coming weeks, adding to the weapons support already provided by Europe and the United States.
Zelensky said the two leaders also discussed fuel supplies to Ukraine, ways to export Ukrainian agricultural products and Kyiv's application to join the European Union, which Macron has said could take decades.
The invasion has also prompted a reversal of Finland and Sweden's historic policy of military non-alignment.
The two countries will on Wednesday formally submit a joint application to become members of NATO, the US-led western military alliance established to hold back Soviet Russia.
Although both countries have long cooperated with NATO, they have spent decades formally unaligned.
The application comes after lawmakers in Finland—which shares a 1,300-kilometre (800-mile) border with Russia—voted overwhelmingly in favour of joining the bloc.
The war has increased public support for membership, which would guarantee an overwhelming military response from NATO members if Finland is attacked.
The two bids must be unanimously approved by the alliance's 30 nations, but Turkish President Recep Tayyip Erdogan has objected, accusing the Nordic nations of harbouring terror groups sympathetic to Kurdish separatists.
US Secretary of State Antony Blinken has voiced confidence the bids will succeed and is due to meet Turkey's foreign minister in Washington Wednesday.
By David STOUT
© Agence France-Presse