The inferno that engulfed the 12th-century Gothic landmark on April 15, 2019, caused its central frame to collapse and ravaged the famous spire, clock and part of the vault—shocking millions around the world 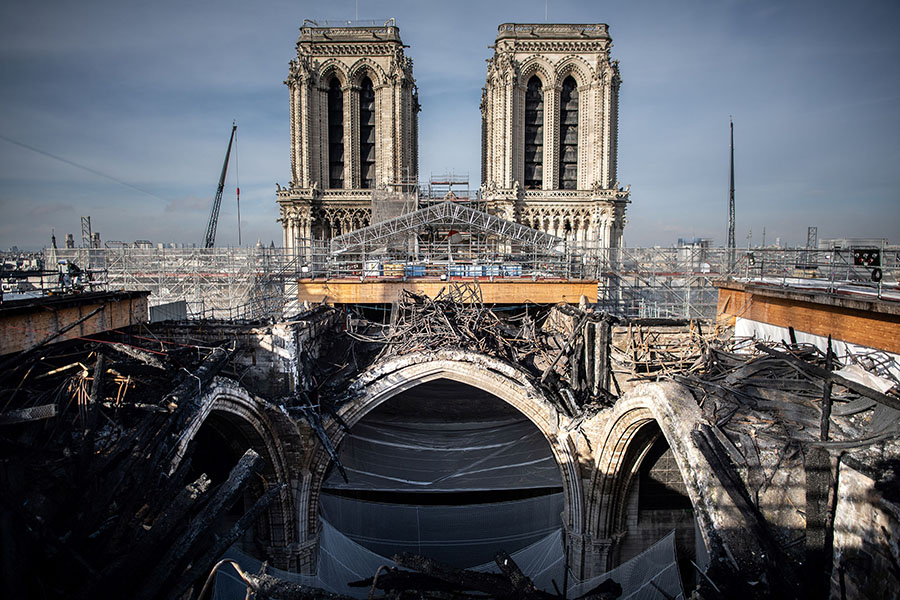 Three years after the devastating fire, Notre-Dame cathedral in Paris is mostly cleared of a thick layer of soot as an army of craftsmen race to meet a deadline to reopen in time for the 2024 Olympics.
Ahead of the anniversary of the blaze on Friday, the mammoth cleaning job of the walls, vaults and floor is almost completed, restoring the cathedral to its original whiteness.
The inferno that engulfed the 12th century Gothic landmark on April 15, 2019 caused its central frame to collapse and ravaged the famous spire, clock and part of the vault— shocking millions around the world.
The cathedral typically welcomed nearly 12 million visitors a year, as well as hosting 2,400 services and 150 concerts.
As an icon of the globally beloved city, the fire triggered an outpouring of generosity with nearly 844 million euros in donations collected from 340,000 donors in 150 countries to date, according to the public body overseeing the restoration.
The gaping hole left in the building is now filled by a forest of scaffolding.
The first stage of the titanic project involved clearing the rubble and burnt beams, reinforcing the flying buttresses, and removing the deadly dust unleashed from 450 tonnes of lead in the structure.
A temporary metal scaffolding had to be built for the task, which was completed last summer at a cost of 151 million euros, largely on schedule despite a three-month pause in 2020 at the start of the Covid-19 pandemic.

Many of the tasks have been farmed out to specialist workshops around France.
They include dismantling and cleaning the huge 18th century organ, the largest in France, that was spared by the fire but coated in lead dust.
The stained glass windows, several statues and the 22 large-format paintings from the 17th and 18th centuries have also been sent for restoration.
The next major phase is to reinstall the medieval wooden framework of the nave and choir, and the 19th century spire — which the team hopes will be completed in the first half of 2023.
A thousand trees have already been cut down in national and private forests across France in preparation.
Meanwhile, stones are this week being extracted from quarries to start rebuilding the damaged vaults.
Tests have been carried out on two of the cathedral's 24 chapels to practise the techniques needed to recreate their original colours.
Work was slowed down in March by a major surprise, when a lead sarcophagus and the remains of a decorative stone dividing barrier from the 14th century were discovered in the ground.
As well as restoring the building to its former glory, the diocese has plans to add a few new touches, integrating contemporary art and old masters, along with a more modern lighting system, moveable benches and biblical phrases projected on the walls in different languages.
A new system for visitors and worshippers will mean that when they return to the iconic cathedral in 2024, they will enter through the large central door rather than side doors.
© Agence France-Presse