Simply Speaking: Colours are a product of the mind, not of reality

In the second of a two-part colour exploration series, we understand what it means 'to see', and decode the influence and magic of colour in our world 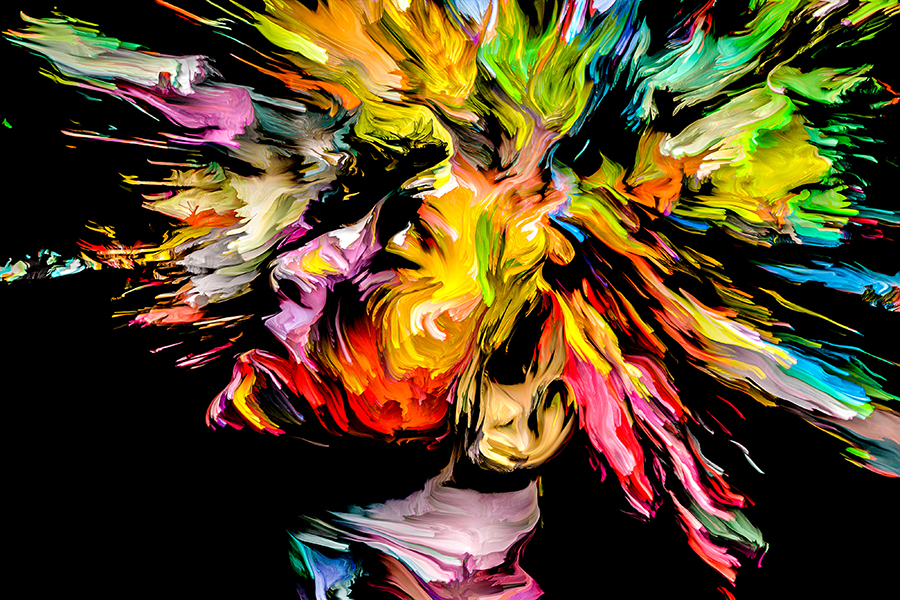 Have you noticed that although plenty of people confess they have ‘no ear' for music you don't come across many who admit they have ‘no eye' for art? Image: Shutterstock

“I want to know one thing. What is colour?”
- Pablo PicassoRead Part One of the colour exploration series here

Even before we decode colour, we must understand vision itself. The word theory derives from the Greek word which means ‘to behold’.  “It’s not what you look at that matters, it’s what you see,” wrote Henry David Thoreau, and his observation is right. The sight so dominates our intellectual development that we construct diagrams and charts so we can 'see what is happening', ‘see if something is possible' and ‘imagine it in our mind's eye'.

Have you noticed that although plenty of people confess they have ‘no ear' for music you don't come across many who admit they have ‘no eye' for art? When looking at a picture if we don't understand it, we react angrily. Perhaps rubbishing something because one doesn't understand it is a remnant of a survival instinct that threatens the unknown before it threatens you.

Most people live with a bag over their heads. They treat sight as a means of avoiding bumping into things or watching television. Most people's lives are like sitting facing forwards on a train where everything rushes past in a blur, instead of sitting with their back to the engine in visual comfort to let the landscape scroll by.

In contrast, most of us faced with a scene look at it rather than look into it. What you see, notice and derive aren't the same things. You wil of course, have noticd the daliberate mistak in this santence. To visually recognise a gap doesn’t impair our ability to derive meaning. Sight is a faculty; seeing is an art.
The Greeks assumed that light entered the eye bringing with it what we see and the beauty of nature. They were wrong. Light comes as invisible wavelengths. It's the brain that does all the work, parses the spectrum, sorts out the shapes and lines, puts everything together to form a mental picture. What happens is this: Light waves arrive on the retina, which translates them into tiny upside-down images. Millions of receptors carve these up into messages that race off to several billion cells. These interpret the data and send back messages to project the images the right way up. That's what you see in the ‘mind's eye’.

The picture translated by the retina and the image projected in the mind's eye is not necessarily the same. During the process language and culture act as prisms to bend and shape our view, so although we all start out seeing the same things, everyone unconsciously creates their interpretation. Therefore, although we think of the world as an entity existing outside our head it's only a mirage in the mind. “If I look at the external world,” said Dylan Thomas, “I see nothing or me."

The stereo vision was discovered by physicist Charles Wheatstone in 1838. Until then everyone assumed that we have two eyes for the same reason we have two kidneys: as a spare if the other gets damaged. Each human eye has more than a million connections to the brain, which has more than ten thousand million cells, each of which has ten thousand further connections. We learn to see. We are not given to understand the world by instinct but make it through experience, categorization and memory. Vision is the art of seeing things invisible, as Jonathan Swift claimed.

Different creatures see differently. The female praying mantis attacks anything smaller which moves. Males are smaller, thus a target. Since mating requires both proximity and movement—it is often a lethal combination.

The eye has arisen de novo some forty separate times in the history of its evolution which began well before 540 million years ago, an entire sequence from the skin to eye across more than 400,000 generations. There is a history of the evolution in RL Gregory’s book The Intelligent Eye.

And then there is the extinct marine reptile, a species of Ichthyosaurus, which had eyeballs one foot wide. Trilobites, crustacean-like creatures that inhabited the oceans for 300 million years, had eyes made of crystal—or to be more precise, calcite—the same stuff as the white sea cliffs.

There are enough common visual evidence experiments for colour:

One might assume that to make an equal scale of tones from white to black, one adds an equal amount of black for each step. Wrong. An equal progression requires the amount of black to be doubled at each step. For example, using transparent grey film the first step has one layer, the second needs two, the third needs four, the fourth eight, and so on. It's an interesting concept.

This disk has a pattern of different coloured stripes and patches on each side. It is made to whizz around by pulling a loop of a string passed through two holes near the centre. Legend tells how the Greeks used these devices to enchant their bored lover—quite how, I can't think—anyway by spinning the disk the colours optically fuse into just one.

This is a disk with a pattern of black lines on a white background. When spun clockwise (five to ten revolutions per second) the black lines turn blue, green and red, from the centre outwards. Spun anti-clockwise the colour order is reversed. It's not magic. It's flicker. Brain cells can't absorb quickly enough and so give out the wrong reading. ‘The eye sees only what the mind is prepared to comprehend’ said Henri Bergson and he was right.

When Johann Wolfgang von Goethe gave a poet’s view about the nature of colour in his Theory of Colours he used existing terminology. Through the Renaissance period, colour had become a subject dealt with by scientists, chemists, artists, sociologists, psychologists and theologists. They developed a language and a standardization. To be more precise you have to resort to an agreed system and give the colour a number. There are several such systems. Alvin Lustig, a distinguished American graphic designer who went blind some years before his premature death, had memorized the number references of the Pantone colour system so that he could still work, and specify the hues and shades in his mind's eye.

Hue is the attribute that distinguishes one colour from another—it comes from the Old English for 'beauty'. Tone is the position a hue holds on the scale from light to dark. Tints and shades are variations of tones. Intensity refers to the purity of the colour.

Primary colours are those which can be mixed to produce all other colours.

Prismatic primary colours are produced by light and come in four hues: Red, blue, green and yellow. Project them so they mix together, and you get white.

Pigmented primary colours are used in paints and inks, and have three hues: Red, blue and yellow. Mix them and you get black.

The system of arranging colours in a circular spectrum running from yellow to green to blue to violet to red to orange to yellow again demonstrates the principle of mixing two different colours to obtain a third.

Medieval physicians used colour spectrums to diagnose disease by keying different colours to different afflictions. Comparing the colour of a urine sample to the chart, the physician would identify what the patient was suffering from.

To any student of art, advertising, moods, and visual effect I will recommend reading Colour by Mitchell Beazley and Interaction of Colour by Josef Albers

The birds and the bees

Horses can't see colours but bees and snakes can. Among mammals, only primates see in colour. Birds, fish, reptiles, and insects have colour vision, horses, cats and dogs do not. Bees can't see red.

Not all people see all colours. Inherited colour blindness affects about one man in 12 and one woman in 200. A wide disparity is explained by Horner's law: Colour-blind fathers have colour normal daughters who are the mothers of colour-blind sons. The most common defect is red-green blindness.

Fascinatingly, colour disability hinders writers more than artists. The painter can use whatever colour he likes. But the author must be able to describe sunsets, flowers, clothes, or whatever, with a degree of accuracy. ‘A writer should write with his eyes and a painter paint with his ears’ wrote Gertrude Stein with deep insight.
Anyway, the fact is colours are a product of the mind, not of reality. Who knows whether my red is your red? Even if two colour experts were asked to dress up a Santa Claus, and one asked to pick the coat and the other the trousers you can be sure the top wouldn't exactly match the bottom. Birds and bees can see colours unknown to humans, such as colours generated by ultraviolet wavelengths. A raven, seen by another bird, instead of appearing plain and dark, has a dazzling plumage of blue, violet and purple. And swans, which to us appear kind of white, are seen as a shimmering spectrum. Not only will we never see these colours, but we'll never reproduce them because for the human eye they do not exist.

Disadvantages can also be an advantage. In World War II, those with severe red-green colour-blindness were pressed into service as bombardiers, because of their ability to see through camouflage.

“Colour is a power which directly influences the soul. Colour is the keyboard, the eyes the hammer, the soul is with the many piano strings. The artist is the hand that places, touching one key or another to cause vibration in the soul. It is therefore evident that colour harmony must rest only on a corresponding vibration in the human soul.”
- COLOUR -
W. Kandinsky
Concerning the Spiritual in Art.

Note to readers: I'm intrigued by information such as that eight percent of the population is left-handed, that giraffes only sleep five minutes every twenty-four hours and so on which is useless but important! In the eighteenth century, German aristocrats kept glass-fronted cabinets that displayed curios. They called it Wunderkammern. This column is some such thing. In an unmarked field, it is easy to wander… I want to open windows to glimpse views rather than a whodunnit or a how-to-do-it. I have a licence to be long or short. To be structured or abrupt. This column has no beginning, middle or end. It's a journey without a destination. Simply speaking...

Tweets by @forbesindia
Pakistani truck artist gives new flair to kicks
Throwback: How Thums Up defended against a global giant