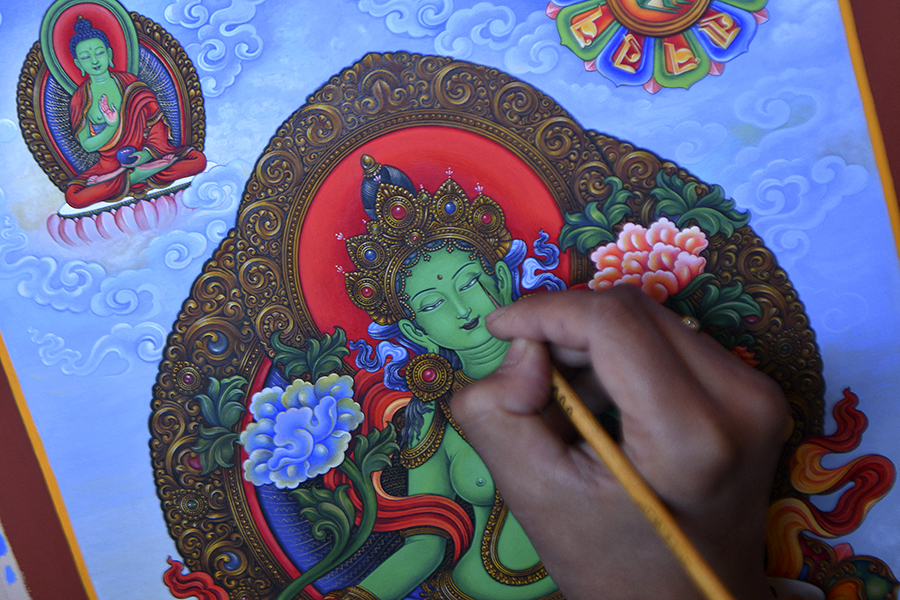 Paubha artist Ujay Bajracharya works on his rendition of the Green Tara, a goddess of compassion revered by Buddhists and Hindus in the country, in Lalitpur on the outskirts of Kathmandu. Image: Prakash Mathena/ AFP

With a shaved head and an empty stomach, artist Ujay Bajracharya dips his brush to line the eyes of the deity Tara as a soothing Buddhist hymn warbles in the background.

The 40-year-old is applying the final strokes to his paubha painting, a devotional art form known for its minute detail, intense colours and the strict purification rituals traditionally required of its practitioners.

It took three months for Bajracharya to complete his rendition of the Green Tara, a goddess of compassion revered by Buddhists and Hindus in Nepal.

Before work began, he shaved off his hair and clipped his nails, while a Buddhist priest blessed his canvas and selected a day auspicious enough for the artist to commence his labours.

Bajracharya woke up early each morning and did not eat until his day's work was over, adopting a strict vegetarian diet that also excluded garlic, tomatoes and onion when he broke his fast.

"My body felt light and I felt more focused and motivated to paint," he told AFP.

"Changing my lifestyle was a bit difficult at first but I had the support of my family and friends, so that helped me stay disciplined."

Paubha remains a common painting method in Nepal but the austere religious observances once followed by its artists have fallen out of practice.

Bajracharya's adoption of these rituals began last year, when he approached a museum in the capital Kathmandu about painting another Buddhist deity while adhering to the forgotten traditions.

Rajan Shakya, founder of the Museum of Nepali Art, said that they immediately agreed to the idea of reviving the practice.

"It is part of what makes paubha art unique and valuable. The more people learn about it, the more demand there will be for Nepali artists. And then we know our art will survive, our culture will survive," Shakya said.

Bajracharya has committed to observing these rules for future paintings, beginning with his exacting work on the Green Tara, which he crafted for worship in a private prayer room at his home.

"I felt that we should preserve this method and the next generation should also be aware—people should know about the spiritual aspect of these paintings," he said.

Paubha artworks use cotton or silk canvases, and colours were traditionally made by grinding minerals and plants into fine powder. Some works even used pure gold and silver.

The oldest preserved paubha painting dates to the 13th century, but scholars believe the tradition is much older, with earlier examples likely disappearing because of the fragile materials used.

Its artists are believed to have inspired trends in thangkas, a similar type of devotional painting in neighbouring Tibet that has been recognised in UNESCO's list of intangible cultural heritage.

A form of meditation

Priest Dipak Bajracharya—a member of Ujay's caste but of no relation to the painter—said that in earlier times paubha artists would stay "pure" to ensure the sanctity of the images they produced.

"The process itself is considered a form of meditation," he said.

While the traditional religious value remains, paubha paintings are now commonly seen as decorative hangings in museums or the homes of collectors.

A growing international appreciation for the craft has proven lucrative for artists, with interested buyers in China, Japan and Western countries.

"Paubha paintings have now become a business, but their aim is not commercial—they are actually objects of respect and worship," said the priest.

Dipak returned to Ujay's home once the latter's hair had grown back for a final religious ceremony, culminating in a ritual to "breathe life" into the finished painting.

The ceremonial practice invites the Green Tara to reside in the work as a vessel for worship.

"This is not art alone, the faith of Buddhists and Hindus is tied to it," said Ujay Bajracharya.

"If we don't preserve this art form, the faith will also slowly fade away."