Many airports are partnering with internationally renowned museums and cultural institutions to offer travellers a true art experience. Here's how it works 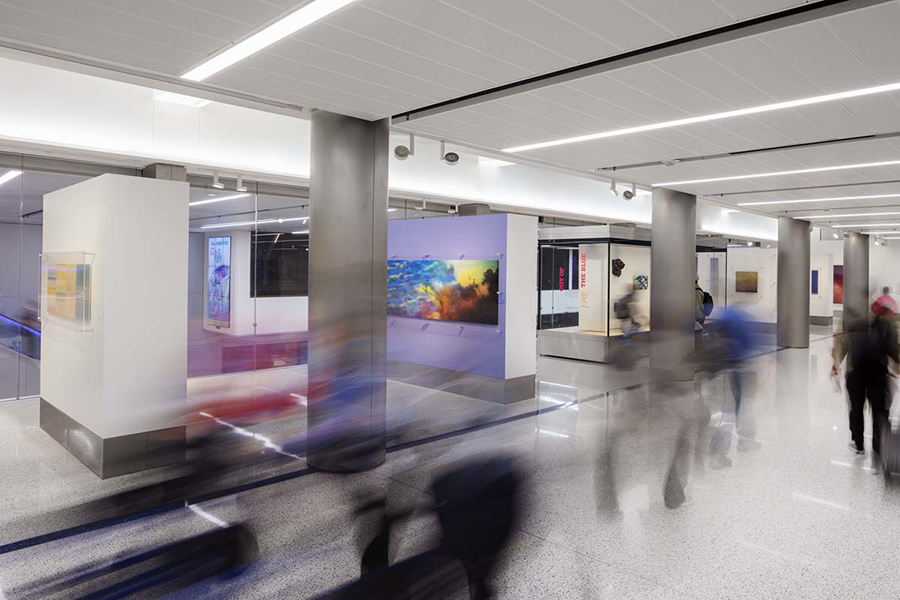 How about visiting an exhibition as you wait for your next flight? Many airports are partnering with internationally renowned museums and cultural institutions to offer travelers a true arti experience. Here's how it works.

Every day, tens of thousands of passengers pass through Los Angeles International Airport (LAX). In the coming months, those transiting through LAX will be able to view "Your Body is a Space That Sees" by Lia Halloran. This art installation pays tribute to the contributions of women like Annie Jump Cannon to astronomy.

"Your Body is a Space That Sees" is one of the new art displays on show at LAX, thanks to a partnership with the Los Angeles Department of Cultural Affairs. Before boarding, travelers can view a selection of sculptures, paintings and multimedia works in three of the airport's nine terminals.

For Sarah Cifarelli, director of arts programming for Los Angeles World Airports, this initiative illustrates LAX's commitment to supporting its users. ""These thought-provoking exhibitions bring a vibrancy of ideas, color and materials, and will enhance the experience for the millions of guests who will pass through LAX this year," she stated in a press release.

Many international airports are following LAX's lead and offering art exhibitions in their facilities. The goal? To make "travel" synonymous with "relaxation," instead of "stress" and "waiting." Doha's Hamad International Airport has teamed up with the Qatar Museums Authority to host gigantic sculptures by big names in contemporary art like KAWS and Urs Fischer. A feature that's sure to appeal to tourists looking for selfie opportunities between two flights.

These cultural initiatives also allow airports to up the ante when it comes to the level of services they offer, while increasing their revenues. A 2007 Italian report, cited by the New York Times, indicated that art exhibitions encouraged passengers to spend more in an airport's restaurants and stores. That's why most of them are set up in areas accessible exclusively to travelers with boarding passes.

Istanbul Airport in Turkey doesn't expect its new exhibition to push its users to increase their consumption, but rather to be more conscious of it. "'0' Zero Point" consists of about 20 portraits that Turkish artist Deniz Sağdıç has made from materials from the airport's waste management center, including old uniforms, cables and plastic bottles.

"As people come to the airport and pass through the international terminal, they will see these artworks and think that these look like oil paintings from a distance. Instead of the oil or acrylic paintings that they are used to seeing ... they will be witnessing the transformation of everyday objects that they are familiar with," she explains in a video showcasing the exhibit.

Teaming up with world-renowned museums

While some airports, such as Istanbul, choose to exhibit new works of art, others host pieces held in the collections of internationally renowned museums. The Paris Airport Group has already teamed up with the city's Quai Branly - Jacques Chirac Museum, Rodin Museum and Orsay and Orangery museums to showcase their collections in its airports. A clever way to encourage the millions of foreign tourists who pass through the airport to plan a visit to one of the many museums in Paris.

Incheon International Airport in South Korea wants to go even further by building a full-fledged branch for an international museum in one of its terminals, or in an annex building. The feasibility of the project is still being discussed and experts will look into the matter in February, according to the Korea Herald. Incheon International Airport is already home to many artworks and exhibitions that pay tribute to South Korean culture. One of them, created in partnership with the National Museum of Korea, can be seen in a dedicated space that the airport has named the "Incheon Airport Museum."