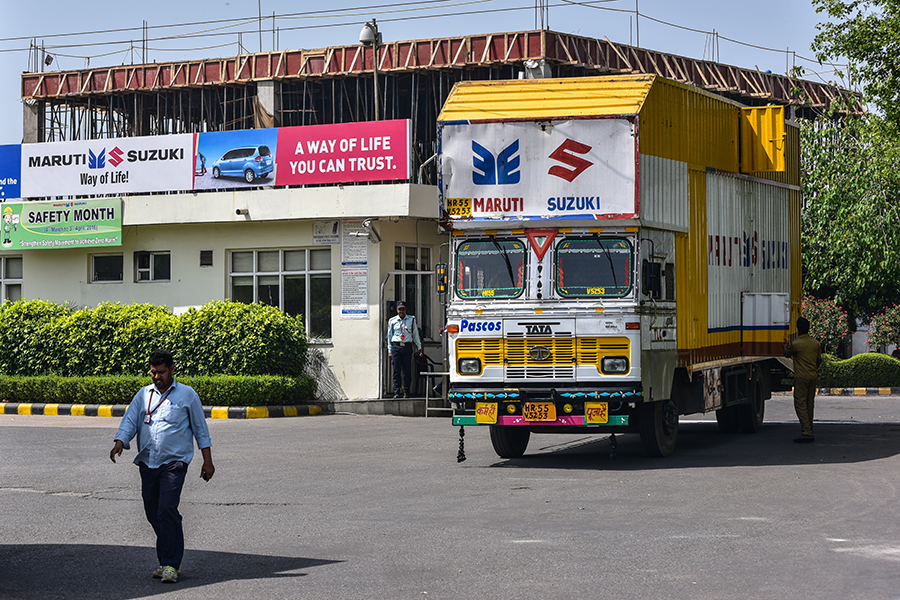 Not its mileage or its affordability factor, this time around Maruti Suzuki is promoting its commercial channel with ‘Tarakki Aapki Saath Hamara’. A significant departure from the ‘Kitna Deti Hai' and 'Papa Petrol Khatam Hi Ni Hunda' campaign era. The auto major’s latest 360-degree media campaign aims to spread awareness about Maruti Suzuki Commercial as the one-stop solution for customers’ business needs and its product range of both goods and passenger carriers. This is the first-ever brand campaign for the segment and the first of many such media campaigns Maruti plans to launch this year. "There was no better time to launch a campaign," says Shashank Srivastava, senior executive director, marketing and sales, Maruti Suzuki, in an exclusive interaction with Storyboard18. “After many years, the commercial vehicle segment has started going up again,” he says. 2018-2019 was the peak when about a million commercial vehicles were sold. Then it came down to 7.17 lakh the following year and went on to hit a low of 5.68 lakh in 2020-2021. This year, however, Srivastava says, they have seen “good growth across segments and we expect that the commercial vehicle space will grow further during the year. This was perfect timing for the campaign.” The commercial channel has reported over 39 percent sales growth in FY21.

Partners on the road to success

The campaign ‘Tarakki Aapki, Saath Hamara,’ according to Srivastava, recognises the drive of customers in this segment to be financially successful and socially recognised. "These customers need a reliable and trustworthy partner to guide in their decision-making. This is where Maruti Suzuki Commercial steps in to offer them products that help them succeed," he says, on the genesis of the campaign. It addresses commercial channel customers that are primarily a mix of ‘owner-cum-driver’ and fleet owners. Maruti Suzuki Commercial was launched in 2016 and now has over 340 showrooms in 230 cities. The first-ever campaign to popularise this offering from the brand is being launched through TVCs, radio, OOH, and digital platforms. Bollywood actors Aparshakti Khurana and Manav Kaul have been roped in to be the face of the campaign that showcases the day-to-day business challenges and solutions offered by the brand at different touchpoints.

Maruti Suzuki India already has a 22 percent (40 percent in the CNG category) market share in the commercial segment. It is ready for the next level of growth in the overall category. Naturally, marketing and advertising spends are also going up for the auto major.Maruti Suzuki India spent Rs 700 crore as marketing expenses last year, out of which Rs 600 crore was its overall media spends. Srivastava says the spending will go up in 2022 by anywhere between 10-15 percent. The ad expenditure, according to him, for auto brands are in four categories. He explains. The biggest expenditure goes towards communication around new brand launches, followed by communication around existing brands. The third is a lower end of the funnel activity, where you need to do the conversion from inquiries to the actual retail. That requires a lot of ad support. The fourth expenditure is on corporate advertising, which includes advertising that is not related to one particular brand but to one aspect of the business. For example, it could be technology, fuel efficiency and others. “We expect new launches to take place in 2022; we expect sustenance expenditure to go up; we expect the conversion door and funnel ad expenditure to go up, and finally, on the corporate side too, there will be plenty of campaigns. The commercial channel campaign is just the beginning of it. So overall, our media spending in 2022 would increase on all these four accounts,” Srivastava adds. Approximately, 25-27 percent of the media spends would go towards digital, 5-7 percent towards Out of Home advertising and 30-35 percent would go towards print and television.

The electric future and barriers to penetration

Given the increasing buzz around electric vehicles and new launches, we ask Srivastava whether Maruti will ride the EV wave in India soon?While several rumours around Maruti’s first SUV electric vehicle and its hinted launch in 2024 are doing the rounds, Srivastava feels that the Indian buyer suffers from “range anxiety”. “There is not enough charging infrastructure in the country. Consumers are always anxious about the range of kilometres that they can run with the balance charge they have. This is what we call range anxiety, and this anxiousness prevents the consumers from purchasing an EV,” he tells us. The other big reason why EV sales are not picking up in the country, Srivastava says, is because of the premium pricing of the vehicles. “The cost is high because the current battery technology makes it difficult to price EVs to be easily purchased by the consumers. The cost of acquisition will continue to remain high and that is one barrier to penetration,” he says. Srivastava gives us a glimpse of how the auto major views an electric future in India. “To bring the cost of acquisition down for EVs, we need to localise a lot of parts and look at hybrid technology. Hybrid technology does not require charging infrastructure, and at the same time, they give very good fuel efficiency. They are also very good for the environment. So the hybrid is the route we believe to electrification in the country and that's what I think is the sustainable model for business in the sector for EVs.” He points out how out of a total of close to 31 lakh passenger vehicles sold in 2021, only 5,500 were electric vehicles. However, Srivastava also feels that going forward, widespread usage and acceptability of EVs will take place. “There will be a point of time when EV sales will suddenly shoot up and this will be in response to both the running cost of EVs being lower and also the fact that the governments across the world are going to be more stringent on the environment front,” he says, “so the question is not whether but when.”

Tweets by @forbesindia
When airports look like art galleries
An Eternity Inside a Wristwatch: The IWC Schaffhausen Perpetual Calendar