RBI holds fire for now but trains its guns on inflation 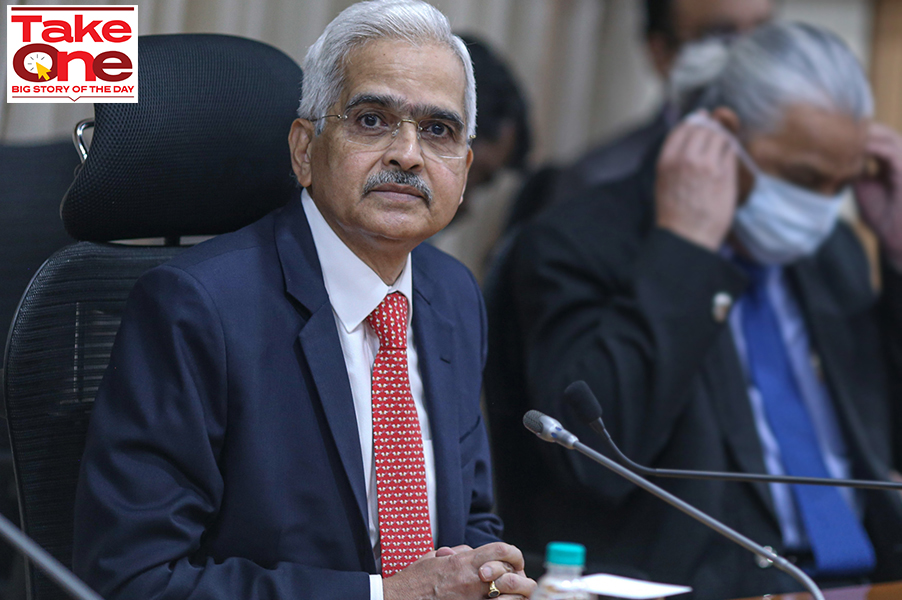 Reserve Bank of India (RBI) Governor Shaktikanta Das once again hailed the power of faith in riding economic turbulence as it prepares for a soft landing after over two years of ultra-accommodative monetary policy. “It is faith that steers us through stormy seas, faith that moves mountains and faith that jumps across the ocean,” Das said, quoting Mahatma Gandhi.

Faith will play a key role as markets brace for heightened risks fanned by rising inflation and anaemic growth. The first monetary policy of the current fiscal year was on expected lines: The Monetary Policy Committee (MPC) unanimously voted to retain the benchmark repo rate at 4 percent and remain accommodative. But, with riders.

The policy underlined that the central bank will “remain accommodative while focusing on withdrawal of accommodation to ensure that inflation remains within the target going forward, while supporting growth”.

In a bid to do so, without rocking the boat suddenly, the standing deposit facility (SDF) rate has been newly set as the floor of the liquidity adjustment facility (LAF) corridor at 3.75 percent. With this move, the reverse repo rate has now been rendered defunct in effect.

In clear terms, the Reserve Bank’s MPC has telegraphed its move towards normalisation to tackle inflation, which breached the upper threshold of 6 percent in January and February.

“By migrating to the non-collateralised SDF rate as the effective lower bound of the policy corridor at 3.75 percent, it is tantamount to a hike in the floor rate. The Russia-Ukraine conflict has clearly played a key role in the RBI finally prioritising inflation ahead of growth,” said Aurodeep Nandi, India economist and vice president at Nomura.

This is further reflected in the central bank’s upwards revision of its inflation projection to 5.7 percent versus 4.5 percent, and the downward revision of its GDP growth forecast to 7.2 percent from 7.8 percent in the current fiscal year. The tone of the policy commentary marked a clear shift in policy direction.

The RBI governor reiterated that the global macroeconomic situation was dynamic and growth and inflation estimates were based on the underlying assumption of crude oil prices at $100/barrel. “Excessive volatility in global crude oil prices since late February and the extreme uncertainty over the evolving geopolitical tensions, any projection of growth and inflation is fraught with risk, and is largely contingent upon future oil and commodity price developments,” Das cautioned.

Most economists and fund managers are confident of the first repo rate hike in August this year as the central bank has raised its inflation forecast, and is widely seen as setting the stage for gradually mopping out surplus liquidity this fiscal year.

“The concern on growth is relatively lower in this policy even as FY2023 GDP growth estimate has been lowered to 7.2 percent from 7.8 percent. Commitment has also been made to start withdrawal of liquidity from FY2023 and over the next few years. This policy strengthens our view that the first repo rate hike will be in the August policy. We expect the stance to be changed to ‘neutral’ from ‘accommodative’ in the June policy,” says Suvodeep Rakshit, senior economist, Kotak Institutional Equities.

“The journey from current ~Rs8tn+ system liquidity to a pre-Covid Rs2tn+ will be a long-drawn one and new tools like SDF will be needed to manage durable liquidity and any idiosyncrasies amid collateral constraints under VRRRs (variable rate reverse repo),” Arora adds.

Mint Street investors have been edgy, driving up the 10-year bond yield to over 7 percent as the RBI governor communicated the central bank’s policy roadmap. Policy normalisation, coupled with the government’s massive borrowing programme of over Rs 10 lakh crore, will put pressure on the yield curve in the coming months.

Mahendra Jajoo, CIO, fixed income, Mirae Asset Investment Managers, explains the focus is now seen as gravitating towards pre-emptive action to nip any possible flare-up in inflation expectations. “After an exemplary handling of Covid-related disruption in the last two years, RBI is yet again seen acting just at the right moment on a forward-looking approach to arrest inflationary pressures,” he says.

Economists, fund managers, and analysts Forbes India interacted with did not fault the MPC’s response to the evolving situation mired in high volatility.

Prasenjit Basu, chief economist, ICICI Securities says the MPC has taken a step in the right direction. Inflation is high partly because of (external) supply shocks, so reducing aggregate demand (through monetary tightening) will not address the issue, and secondly, there is a considerable output gap, he asserts. “Staying accommodative is thus the right approach. Loan growth needs to accelerate to enable a rebound in domestic demand, but the RBI will also withdraw accommodation tactically if inflation gets too far from the target,” he says.

Firmly rooted in faith, Das assured, “The Reserve Bank will continue to adopt a nuanced and nimble-footed approach to liquidity management while maintaining adequate liquidity in the system.” The central bank has been communicative, signalling its policy direction from time to time, to minimise shocks and disruptions in financial markets.