Nearly two weeks of Indigenous-led protests against rising fuel prices and living costs have crippled transportation in Ecuador, with roadblocks set up in 19 of the oil-rich country's 24 provinces 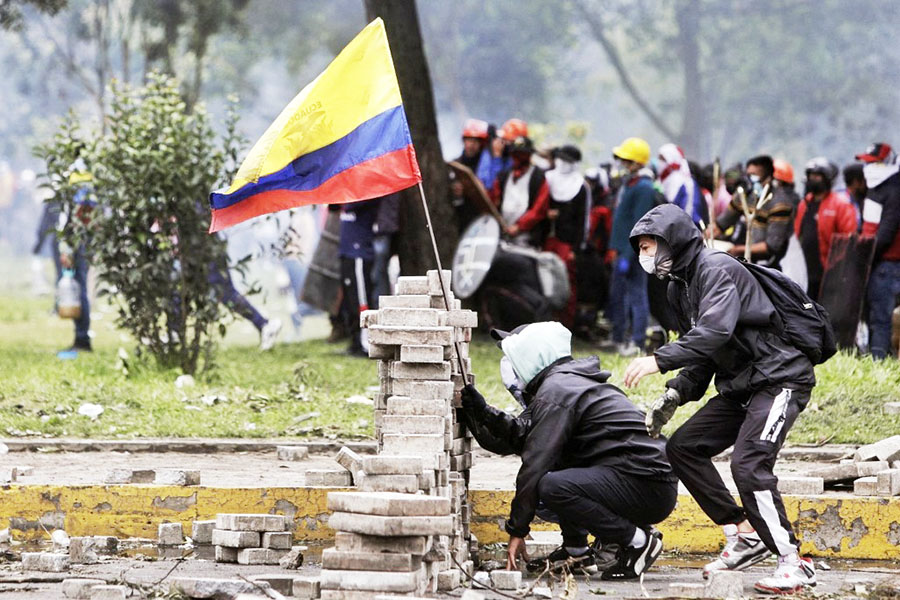 Demonstrators stand behind a barricade during clashes with riot police at the El Ejido park, in Quito, on June 24, 2022, in the framework of indigenous-led protests against the government. Ecuador's government and Indigenous protesters accused each other of intransigence as thousands gathered for a 12th day of a fuel price revolt that has claimed six lives and injured dozens. After the most violent day of the campaign so far—with police firing tear gas to disperse thousands storming Congress—the government accused protesters of shunning a peaceful outcome. Image: Cristina Vega RHOR / AFP

Quito, Ecuador: Ecuador's energy ministry warned Sunday that oil production had reached a "critical" level and could be halted entirely within 48 hours if protests and roadblocks continue in the crisis-wracked South American country.
Nearly two weeks of Indigenous-led protests against rising fuel prices and living costs have crippled transportation in Ecuador, with roadblocks set up in 19 of the oil-rich country's 24 provinces.
"Oil production is at a critical level," the ministry said in a statement.
"If this situation continues, the country's oil production will be suspended in less than 48 hours as vandalism, the seizure of oil wells and road closures have prevented the transport of equipment and diesel needed to keep operations going."

"Today, the figures show a decrease of more than 50 percent" in production, which was at roughly 520,000 barrels per day before the protests, it said.
Ecuador's economy is highly dependent on oil revenues, with 65 percent of output exported in the first four months of 2022.
An estimated 14,000 protesters are taking part in the nationwide demonstrations, most of them in Quito.
Shortages are already being reported in the capital, where prices have soared.
Also read: Russia becomes China's biggest crude oil supplier as Europe cuts imports
Violence between police and demonstrators has reportedly left five dead, while about 500 people have been injured, according to various sources.
The National Assembly will eventually vote on whether to oust President Guillermo Lasso over what opposition lawmakers say is his role in the protests, with a no-confidence hearing resuming for a second day late Sunday.
Earlier in the day, Production Minister Julio Jose Prado said that public-private economic losses from the protests totaled $500 million.
"Each additional day of downtime represents $40 to $50 million lost," he said on Sunday.
Also read: India growth slows on inflation, higher oil prices
Overall losses since the protests began include 8.5 million liters of milk worth $13 million as well as $90 million in agricultural goods and livestock.
The tourism industry has seen cancellations rise to 80 percent, with losses amounting to at least $50 million.
Additionally, "in the flower farm sector, 12 days of shutdown resulted in $30 million in losses and damage to trucks and farms," Prado said.
© Agence France-Presse

Tweets by @forbesindia
Zendesk to be bought out for $10.2 bln; IT services staff in no hurry to WFO; Intel expands India design centre
Why India isn't a global manufacturing hub