If approved, Chile will become one of few countries in the world, and the first in majority Catholic Latin America, to guarantee the right to "voluntary termination of pregnancy" in its founding law 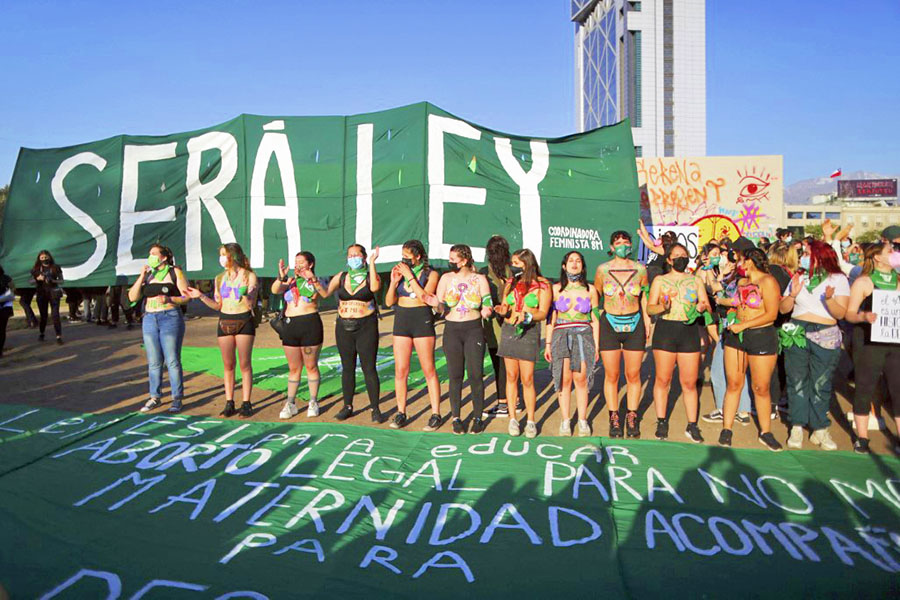 Demonstrators hold a green flag during a march celebrating after the lower house took a step toward decriminalizing abortion, on the Global Day of Action for Legal and Safe Abortion in Latin America and the Caribbean in Santiago, Chile, on September 28, 2021. In a historic initiative due to be voted on in the Senate, the lower house of Chile approved a bill to decriminalize abortion up to 14 weeks of gestation. Image: Pablo VERA / AFP

Santiago, Chile: As the United States loses a five-decade-old right to abortion, Chile—long one of Latin America's most conservative countries—is gearing up to enshrine the same right in its constitution.
It is a guarantee hard fought for by supporters of abortion rights, but a final hurdle remains: Chile's first post-dictatorship constitution will be put to a referendum on September 4.
If approved, Chile will become one of few countries in the world, and the first in majority Catholic Latin America, to guarantee the right to "voluntary termination of pregnancy" in its founding law.

Until 2017, Chile had an outright ban on the procedure, and today allows it only in cases of rape, or if there is a threat to the life of the woman or fetus.
The issue is still divisive in Chile, but much less so since the Catholic Church's sway over lawmakers has weakened in recent years.
A recent Ipsos poll found 41 percent of Chileans in favor of elective abortion.
Another 32 percent approve of it conditionally, such as cases of pregnancy due to rape.
Seven percent are against it altogether.

'Call things by their name'

Even among the 154 members of the Constitutional Convention elected to draft a new founding law for Chile—half of them women—there was no consensus on including an explicit mention of abortion in the clause on sexual and reproductive rights.
Some feared adding it would generate controversy that could lead to the document being rejected altogether.
But Chile's influential feminist movement forced its inclusion, obtaining the 15,000 signatures required for a proposal to be considered by the drafting convention.
"It is necessary to call things by their name," said convention member Alondra Carrillo, an activist who fought for stipulating an abortion right in the constitution "without any euphemism."
As it stands now, Article 16 of the draft document outlines a right of access to "services" required for "voluntary termination of pregnancy."
Chile is not the only country in Latin America that is moving in the opposite direction as the United States on abortion rights.
In February, the constitutional court of Colombia—another conservative nation—
decriminalized abortion for up to 24 weeks of pregnancy, joining Uruguay, Cuba, Guyana and Argentina in allowing the procedure.
It is the latest cutoff for abortion in Latin America, and went against the wishes of President Ivan Duque, who described the move as "heinous."
The procedure is also legal in Mexico City and eight more of Mexico's 32 states. US women had already turned to services in Mexico for abortion care, often due to high healthcare costs in the United States, but demand is expected to increase in light of new restrictions.
Most countries in Latin America allow abortion for medical reasons or in cases of rape, but an outright ban remains in place in El Salvador, Honduras, Nicaragua, the Dominican Republic and Haiti.

'Life must be defended'

Chile's constitutional draft has been criticized by some for not determining a gestational cutoff, which opponents have argued will allow abortions to happen "until nine months" of pregnancy.
Such a conclusion would be "completely false," said Janise Meneses, a human rights expert and Constitutional Assembly member.
"The deadline is not mentioned because it is not a constitutional matter" but rather one for the law, she told AFP.
Anti-abortionists in Chile are looking to the US Supreme Court ruling that "the Constitution does not confer a right to abortion" but was rather a political decision.
Also read: Google changes rules on abortion ads after complaints
"We must not approve a Constitution that establishes the right to abortion," said Bernardita Silva of the Chile Siempre "pro-life" group, calling the US ruling a "very encouraging" legal example.
"Life must be defended," she added.
Even after the fall of the dictatorship of Augusto Pinochet in 1990, Chile continued to lag behind on civil rights under the influence of powerful ultra-conservative Catholic groups such as Opus Dei.
Same-sex relations between men were criminalized until 1999 and divorce allowed only in 2004.
In 2017, by which time the Church was severely weakened by a series of pedophilia scandals, Chile allowed abortion for medical reasons and in cases of rape.
Two years later, the country erupted in anti-establishment anger with deadly mass protests to demand a more equitable society—including civil and reproductive rights.
Same-sex marriage was legalized last year.
In December, Chileans elected President Gabriel Boric, who came to power with a leftist program that includes defending the right to abortion, opposed by his conservative rival.
By Paula BUSTAMANTE
© Agence France-Presse