Budget 2022: Much more beyond the capex push

Finance Minister Nirmala Sitharaman has announced the right steps, now the focus will be to deliver. The thrust towards domestic manufacturing, green bond issuance and, hopefully more cheer on disinvestment, could boost investor confidence further 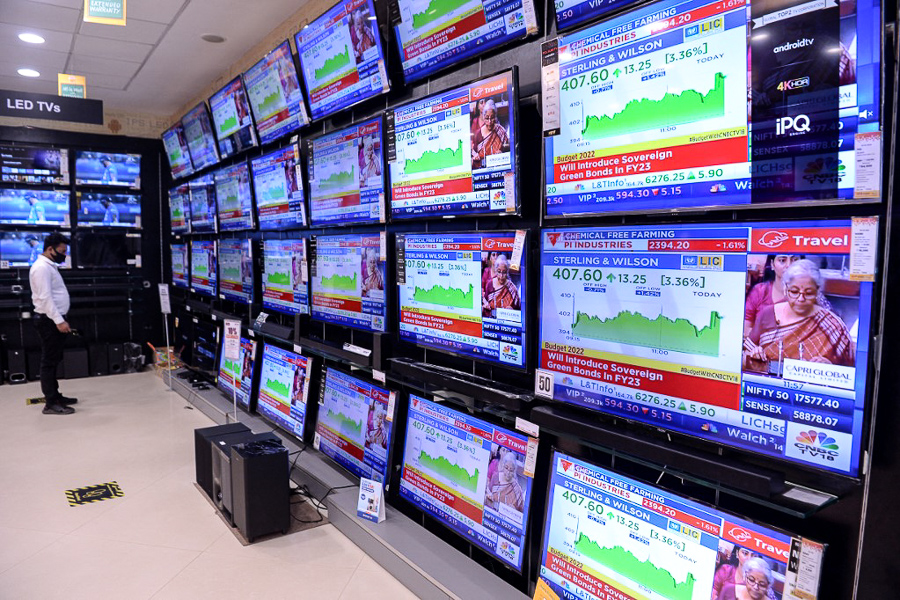 The markets are, however, still down by about 4 percent from the mid-January 61,300 levels, hurt by sharp foreign funds sell-off, after the US Federal Reserve’s firm indication to tighten interest rates there to curb inflation
Image: Indranil Mukherjee / AFP

Finance Minister (FM) Nirmala Sitharaman has walked the tightrope without any hiccups, but the goal is yet to be reached. Deliverables have been the biggest bugbear for many a government. On Tuesday, she presented the FY23 Budget which spoke about boosting capital expenditure and providing incentives to promote domestic manufacturing, which would be consistent with the government’s broad ‘Make in India’ campaign.

India will also start to issue sovereign green bonds, the FM announced, which would be used to fund projects that will reduce carbon intensity. Investors, for the second successive year, cheered on Budget day in an emphatic manner, with the benchmark Sensex index closing up 1.46 percent or 848.4 points at 58,862.57. The markets are, however, still down by about 4 percent from the mid-January 61,300 levels, hurt by sharp foreign funds sell-off, after the US Federal Reserve’s firm indication to tighten interest rates there to curb inflation.

India’s growth, at least statistically, appeared to be strong, this year. The FY22 GDP is pegged at around 9.2 percent—the highest amongst all largest economies—growing smartly from a low base in FY21. A deeper look reveals that not all is well. Unemployment rate at close to 8 percent in December 2021, according to the Centre for Monitoring Indian Economy (CMIE), is at a four-month high. Job creation continues to take a beating, particularly in urban India. Further, small businesses continue to struggle to survive during the third pandemic wave which has spread across several states in the past few weeks.

It required a government push to suggest that it would take the lead and boost spending and, in turn, jobs and incomes. The move to increase the capital expenditure outlay by 35.4 percent to Rs7.5 lakh crore for FY23 is seen as a huge sentiment booster. Besides the focus on infrastructure spending which will also boost jobs and income creation, it will provide some more time for private sector capex to pick up, which has struggled to grow during the two tough years of the pandemic.

“Overall this appears to be a good Budget, optimistic, spending-oriented. The ecosystem in India is quite robust with 46 unicorns created in 2021 alone,” says Nikhil Kamath, co-founder of Zerodha, a rapidly expanding financial services firm. Inflation, which is being pegged at 6 percent, is a concern, he adds.

“The sustained capex push signals the fact that the government is laying the path crowding in effect on private sector capex cycle which has remained dormant for a long time. It is hoped that this combination can eventually lead to improved employment, wage growth, consumer demand and banking sector leveraging,” says Dhananjay Sinha, managing director and chief strategist, JM Financial Institutional Securities.

Experts Forbes India spoke with offer comforting words—that India will be able to grow by around 8 percent in FY23, even though it might start to moderate off in the years after that.

“The market appears to be responding to multiple factors, including the recovery in global equities after a volatile phase. The impact of the Budget may be coincidental. The market will be looking at the actual response of the private sector in terms of asset utilisation, operating leverage, and initiative to invest in capacities, Sinha adds. “Private sector capex is attempted to be encouraged with a considerable element of protectionism from imported goods, thereby deepening the reliance of Atmanirbhar and the import substitution theme.”

Elephant in the room

One of the areas which remains to be addressed is the tax slabs for individuals, and reducing the dependence of only 1-2 categories to bring in taxes. "Addressing the tax slabs for individuals and ‘expanding the net’ remains an important area which wasn’t addressed, yet again. The eventual idea should be that the burden on individuals is not restricted to only a part of the earning or tax paying community, and needs to be addressed in coming years," Jain says.

The government’s plan to privatise two public sector banks and one general insurance firm has got delayed. We will have to see how this is rolled out in the next financial year. For years, public sector banks have been struggling to tackle rising bad loans and weak capitalisation, which almost made them impossible to grow.

Despite the stock market cheer, the jury is still out on where the markets could go from here. In nine times out of 13, the markets have fallen on Budget day. While the December-ended corporate earnings have been positive, inflationary pressures and liquidity tightening could well lead to a further consolidation in the markets in coming days.

Tweets by @forbesindia
Budget 2022 brings little cheer for auto and aviation
Budget 2022: Government steers clear of favouring poll-bound states but is it still an election budget?