Marlon Brando's dream was to turn his Tahitian hideaway of Tetiaroa into a glamorous, eco-friendly hotel. Now the actor's children have transformed his South Seas paradise into a luxurious 35-villa resort with a Michelin-starred chef, a Polynesian spa and natural beauty worthy of its godfather 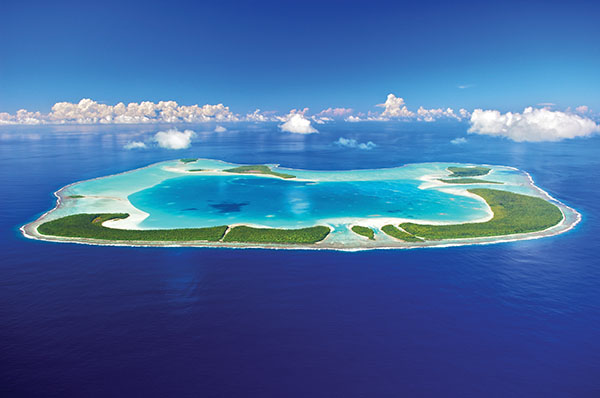 Image: Tim Mckenna
On the waterfront: Marlon felt that everyone in Hollywood wore a mask,” says the developer of Tetiaroa’s new eco-resort, The Brando. “But Tahitians didn’t wear masks. There’s no hypocrisy. He loved that”

You have to feel this place. see it: open your eyes, says Tumi Brando as we skim across the joltingly blue lagoon of Tetiaroa, her grandfather Marlon’s private atoll in French Polynesia. Tumi grew up here, fishing with her grandmother Tarita and taking mud-baths on Oroatera, one of the 12 motus (or islets) that make up the atoll. These days, the 26-year-old is showing off the property to guests at The Brando (thebrando.com), the lush eco-resort the Oscar-winning actor envisioned many years before and that finally opened on July 1—the 10th anniversary of his death. Marlon first saw Tetiaroa, 30 miles north of Tahiti’s main island, while filming Mutiny on the Bounty there in 1960. It was, and is, a place out of time with its vivid turquoise water, untouched beaches, lush vegetation and teeming life, both above and below the water.

Marlon was immediately enamoured with its exotic beauty. Tetiaroa was for centuries a retreat for Tahitian royalty. The actor, a complicated man leading a complicated existence back home, fell in love with island life—not to mention his romantic interest in the film, 19-year-old Tahitian Tarita Teriipaia, whom he later married. “Marlon felt that everyone in Hollywood wore a mask,” says Richard Bailey, president and CEO of the hotel company, Pacific Beachcomber, that built and operates The Brando. “But Tahitians don’t wear masks. There’s no hypocrisy. He loved that. He felt Tahitians had something to teach the world about how to lead a happy, balanced life.” 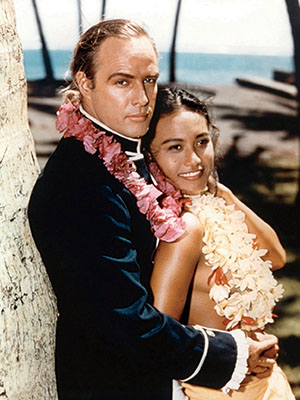 Six years after his first sighting, Marlon bought the entire atoll, a process that involved a request to the French president and a potentially hazardous negotiation with a nearly blind woman who inhabited one of the motus and greeted all intruders with rifle fire Once he took ownership, the actor would visit Tetiaroa for a month or two between films. Visitors would see him wrapped in a pareo, barefoot with his hair in a ponytail. “He was always playing and joking around,” Tumi recalls. “At dinner, he would do things like yell, ‘Look, there’s a lizard!’ and when you’d turn around, he’d have thrown fish bones on your plate or stolen your food.”

The resort’s namesake with co-star Tarita Teriipaia, whom he later married, on the set of Mutiny on the Bounty
Along the way, while spending idyllic stretches on the island, Marlon developed a passionate interest in conservation. As Bailey recalls, he started expressing ideas about sustainability before the term was in use and read voraciously about atoll ecology. Given the remote location, he also became a ham radio operator, a skill he continued to employ when he was back in his house in Los Angeles, never identifying himself as one of the biggest movie stars. “People all over the world had conversations with him without ever knowing it,” Bailey says. 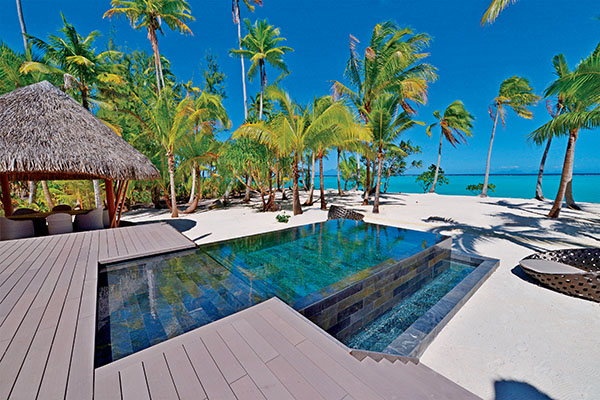 Natural bounty: An infinity pool in one of The Brando’s 35 villas

He also opened a modest eco-lodge, Tetiaroa Village, on the island so that others could experience his private paradise, among them famous friends such as Quincy Jones and Robert De Niro. However, amenities were few—there was a notable lack of air-conditioning for this steamy part of the world—and basic services were unreliable. “I’m sure if you asked Quincy Jones what he remembers from his visits, he’d say that the island is beautiful,” Bailey says. “But also that the mosquitoes drove him nuts and that he couldn’t flush the toilet because the generator was out.”

In 1999, with an eye to upgrade the place, Marlon asked Bailey to examine the lodge. Bailey was horrified with what he found.

He wrote Marlon a long memo, explaining that he couldn’t help because he was in business to deliver quality travel experiences, not to ensure that there was water and electricity. “He got very upset,” Bailey recalls. “He wasn’t used to people telling him that things wouldn’t work.” But six months later, he called again and asked what it would take to set things right. 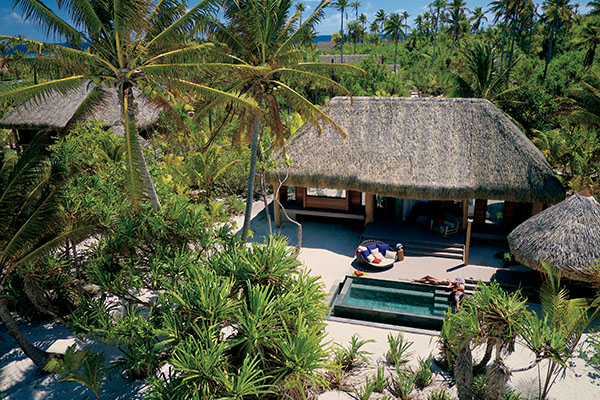 Image: Tim Mckenna
The island of Mr Brando: The resort’s villas are sleek but muted, designed to blend in with the natural surroundings seamlessly—and sustainably

Paramount among Marlon’s priorities were sustainability and renewable energy. “He didn’t want any fossil energy on the island,” Bailey says. “But he wanted air-conditioning and said we could get it from the ocean. I thought it was one of his crazy ideas.” It was real enough, though, as Bailey learnt when he went to Hawaii to meet Dr John Craven, formerly the chief scientist for the US Navy’s Special Projects Office. Craven had developed a system for creating electricity by planting a deep pipe into the cold reaches of the ocean below 3,000 feet. The eventual refinement of the technique was first used at Pacific Beachcomber’s hotel, the InterContinental Bora Bora Resort & Thalasso Spa, and is in place today at The Brando, where it provides half of the resort’s energy. (A field of solar panels bordering the airstrip provides another quarter, and a biofuel thermal power station running on Tahitian coconut oil makes up the rest.)

Design was largely left to Bailey, with the exception of a ban on overwater bungalows, a staple of other Polynesian resorts. “He thought it was an encroachment on nature,” explains Bailey. “He wanted the approach to his island from the water to look as much as possible like it had in its primitive state. So we set everything back into the trees.” Today, The Brando’s cottages (one-bedroom villas start at $4,000 a night, all inclusive) are camouflaged among the foliage. The buildings have an understated elegance, particularly the interiors. Designed by Pierre-Jean Picart, a Frenchman living in Tahiti, they blend Polynesian style with whimsical flourishes. The building housing the fine dining restaurant Les Mutinés, for example, has curved arcs like the hull of a boat, while lines of layered twigs embellish some buildings’ exteriors, fringes of wood drape over balconies and the spa buildings are clad in a skein of striplings resembling a bird’s nest. Overall, it’s an aesthetic that Bailey believes Marlon would have appreciated. 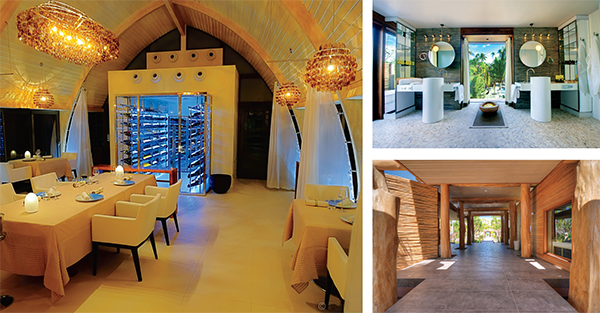 That consideration—what would Marlon have wanted?—recurred to Bailey throughout the five years of construction. “I felt him looking over my shoulder the entire time,” says Bailey. “And I heard him arguing, as we always did.” It’s hard, though, to imagine Marlon being displeased. The villas are sleek but muted, constructed mostly in light wood with neutral taupe colour schemes. They come complete with media rooms with satellite TVs, plunge pools and direct access to the beach. Parisian chef Guy Martin, of the Michelin two-star Le Grand  Véfour, is the consultant for the two restaurants.

Dishes such as mahi mahi with white mushroom, spice, and a ginger and basil emulsion in the somewhat more formal Les Mutinés, and grilled tuna with coconut vierge dressing in the more casual Beachcomber Café would be remarkable in any setting. At breakfast, Martin’s Paris sous-chef Antoine Soots, the executive chef here, turns out remarkably flaky, authentic croissants that don’t turn soggy in the humidity and are even better with the voluptuous honey produced by the island’s own beehives. Guests can spend their days in the Varua spa experiencing treatments such as the “Varua Mana experience”, a Tahitian tamanu oil scrub followed by a coconut oil Polynesian massage. Off land, they can go snorkelling or take excursions conducted by Te Mana O Te Moana, a Tahiti-based non-profit devoted to the conservation of marine wildlife. They can also visit the eco-station of the island’s own non-profit Tetiaroa Society, where research is being conducted by scientists from visiting universities—another important goal of Marlon’s. The society’s director, Hinano Bagnis, first met Marlon as a 10-year-old visiting the island. She works closely with Marlon’s son Teihotu, who has spent his entire life on the island. 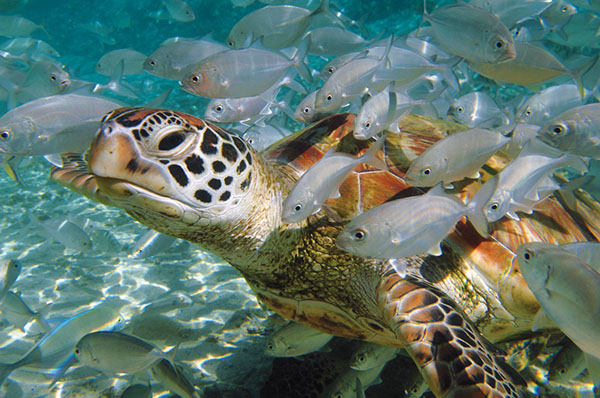 The elder Brando would no doubt appreciate family members being involved with the new venture. But what would he make of the new Hinerava boutique selling Tahitian black pearl necklaces for $100,000 each? Or the 15 private residences included in the future plans?

Some family members believe they received an answer during a sunset beach ceremony held for Marlon in August, conducted by a Tahitian high priest. En route to Tetiaroa in The Brando’s private plane, the priest saw two rainbows and then two whales, all auspicious signs, he said. Then, during the ceremony, birds started fluttering wildly, the sun burnt orange along the reef line and a strong spiritual magnetism came over the crowd.

Perhaps it was, as Bailey suspects, Marlon trying to make one last suggestion for the resort. Or perhaps the island’s godfather was finally giving his blessing.

Tweets by @forbesindia
Online conversations: It's the new order, stupid
Taking the leap: Transforming your company into a sustainable enterprise (part 1)