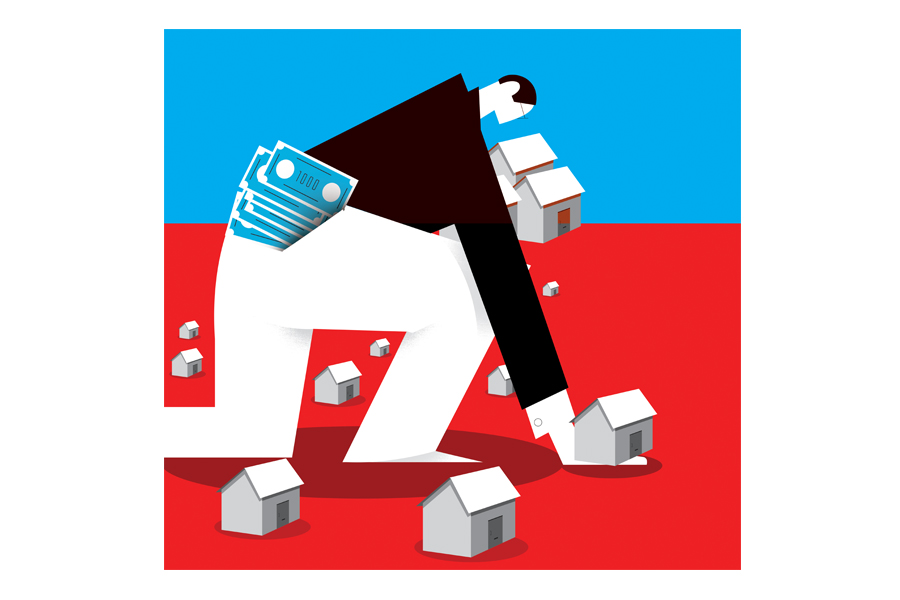 While working with Max Life Insurance in Delhi, Anil Mehta always had to deal with customers who had limited access to financial products. His field work had taught him that customers with monthly incomes below Rs 50,000 may not be able to save much, but are reliable when it comes to repaying loans. “We were trying to sell them insurance but most believed in deferring such products for a better day. They wanted to improve their present lives. So, I decided the best product for them was a housing loan,” says Mehta.

In 2010, with a Rs 25-crore investment from private equity firm Sequoia Capital, Mehta started India Shelter Finance Corporation, an affordable housing finance company (AHFC) that lends money to economically weaker sections.
Over the years, his hypothesis on the high creditworthiness of the poor have been more than validated. Gurugram-based India Shelter has been profitable from its maiden year and has been growing revenues at 75 percent annually over the last six years.

In FY2017, it is expecting revenues of Rs 100 crore, mostly interest income from customers. It has already disbursed loans worth Rs 900 crore to 16,000 customers, with an average ticket size of Rs 5 lakh.
Like Mehta, many institutions in the credit market have realised the potential of affordable housing. In 2013, Motilal Oswal Financial Services (MOFS) applied to the National Housing Bank for a licence to enter the housing finance business.

At the time, the financial services company was generating significant profits from its fee-based businesses related to investment banking, mutual funds and broking. But these businesses were competitive and their overall share of the pie was not increasing.

The group reasoned that a housing finance business would help offset the vagaries of the capital markets, which have prolonged bull and bear phases.

“We decided to foray into housing finance. The pent up demand of this market is huge and there is space for a lot of players and the overall pie of the business is growing. Today, in the semi-urban and rural markets, there is an encore of what happened 20 years ago in urban areas,” says Anil Sachidanand, managing director and CEO, Aspire Home Finance, the housing finance division of the Motilal Oswal group, that began operations in 2014.

Aspire currently has a loan book of Rs 3,728 crore. For the first nine months of FY2017 the company clocked revenues of Rs 401 crore, contributing 31 percent of the group’s income. Its average loan size is around Rs 10 lakh.

IIFL Holdings has a similar story. The diversified financial services company focussed solely on its capital market-related businesses till 2013, when it diversified into a non-banking finance company.

Of this, the housing loans business, IIFL Housing—which focusses on affordable housing and has a loan book of Rs 9,000 crore—is the fastest growing, accounting for 15 percent of the group profits.

“There is a lot going for this sector. There is massive demand on the one hand and the government is serious about creating more houses. Our focus is on tier I and tier II cities where prices are still high, so our [average] loan size is higher at Rs 15 lakh,” says Monu Ratra, CEO, IIFL Housing. He adds that his eyes are on middle-income home buyers.

Investors too realise the potential of companies catering to the affordable housing market. In the last two years, the market cap of both IIFL Holdings and MOFS have more than doubled (see chart). 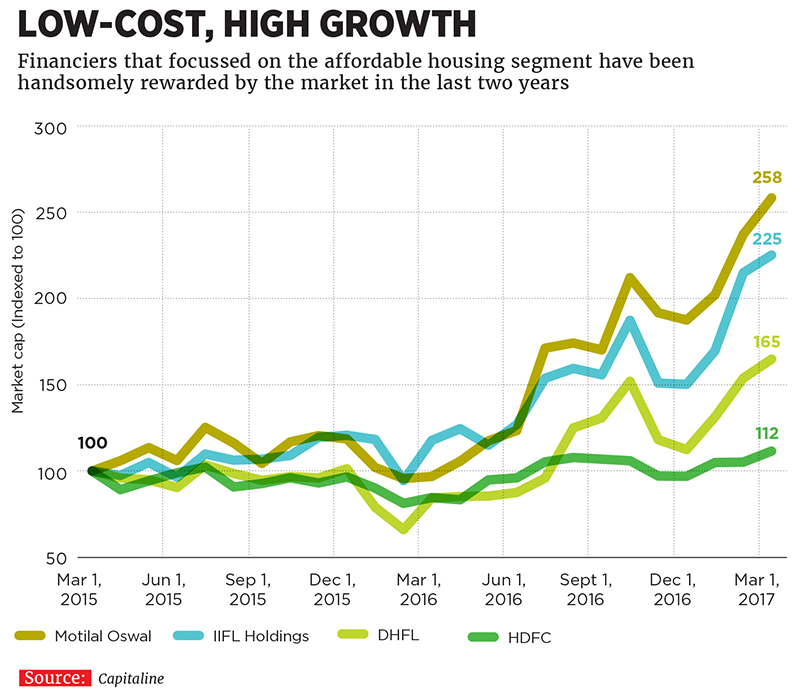 A typical customer of an AHFC is employed in the unorganised sector. Without formal salary slips, they are unable to prove they have steady incomes. The average size of these loans is below Rs 15 lakh.

Taking a leaf out of AHFCs’ book, even large housing finance players like HDFC and ICICI Bank are now targeting lower income customers. But the average loan size for these companies is Rs 25 lakh.

According to ratings agency Crisil, the total market size of affordable houses in India is around Rs 1.3 lakh crore, or 22 percent of the Rs 5.8 lakh crore housing market.

Housing finance companies that have come up over the last seven years have focussed primarily on the affordable segment, with loans below Rs 15 lakh.

Their raison d’être? India is urbanising at a fast rate. According to the World Bank, 32 percent of India’s population lives in urban areas, a number that is expected to grow.

The data also shows that the share of people living in small villages has gone down to 32.95 percent in 2011 from 36.9 percent in 2001. These towns are potential markets for AHFCs.

And that’s not the only tailwind. The Pradhan Mantri Awas Yojana scheme, which provides assistance to urban residents looking to buy affordable homes, saw an increase in its allocation to Rs 23,000 crore in Budget 2017.

But the real boost for the sector has come from subsidies. Presenting Budget 2017, Finance Minister Arun Jaitley announced an increase in the interest rate subsidy given to those who take loans to buy low-cost homes. For loans up to Rs 9 lakh, the subsidy is 4 percent.
Meaning, if an AHFC charges an interest rate of 14 percent for a loan below Rs 9 lakh, the customer pays only 10 percent interest after the government subsidy. For loans of Rs 9 lakh to Rs  12 lakh, the subsidy is 3 percent.
As with all businesses, profits are the end motive of AHFCs.  These companies charge around 2 percentage points more interest than prime housing finance companies to offset the smaller ticket size of their loans; the small ticket size also increases operating expenses. Moreover, many of these AHFCs are yet to acquire scale; they are in an investment phase,  leading to higher expenses.

High expenses are also being borne by the older companies that started concentrating on the affordable market in the last five years. Dewan Housing Finance (DHFL), for instance, has been in business for the last 32 years, but is now taking a focussed approach towards the low-income segment. It has added 100 new branches to reach out to 220 locations with the use of technology.

Although the bulk of its customers are prime salaried, the fastest growing segment for DHFL is the affordable housing finance business, which is growing at 10 percent on a quarter-on-quarter basis.

Harshil Mehta, CEO, DHFL, has seen this business becoming customer centric and very competitive. “The shift has clearly been towards borrowers from the lenders. The customer has the option to transfer loans and go to companies that offer better services and lower fees. We will see more benefits coming to low-income customers,” says Mehta.

Mehta agrees that over the last few years his company’s operating expenses have been rising as the business is growing. The return on assets (RoA) of DHFL is 1.5 percent.

The large-ticket housing business is more profitable than an affordable housing business. On an average, the former has RoA of 2 percent while AHFCs have RoAs of 1.6 percent.

As the scale increases, the operating expenses will fall. But as of now, companies lending to affluent urban customers are generating higher returns, although their growth rate is much lower than AHFCs.

Credit rating agency ICRA expects the incremental spreads in the AHFC business to decline marginally by 10 to 15 basis points (one basis point is one-hundredth of a percentage point) owing to the highly competitive scenario.

Non-interest income is also expected to fall due to reduction in processing fees. However, profitability is likely to be supported by stable operating expenses and credit costs in the future.

“There will always be a shortfall in housing. To a certain extent, large-ticket houses did see some fall in demand in the recent past but that is not true for affordable housing. The segment is growing at a fast pace as the demand is very strong,” says Krishnan Sitaraman, senior director, Crisil.

“This is a sector which is part of our basic necessity.”

Tweets by @forbesindia
Trump's name and brand on Vancouver skyline bring profits and jeers
Sensex at 30,000: Can you still make money from here?