In New Zealand, the financial titan builds a trophy collection of game-changing resorts 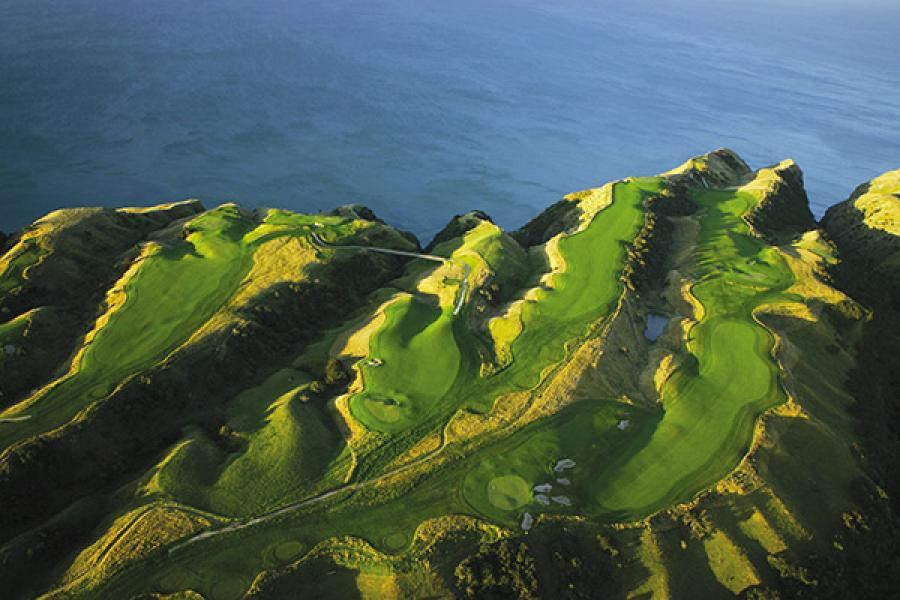 Hedge fund billionaire Julian Robertson Jr first visited New Zealand in 1978 on a yearlong sabbatical from his asset manager’s job at Kidder, Peabody. With his late wife, Josephine, and two young children (4 and 1) in tow, “we just picked up and went down there,” the 80-year-old Robertson says in his slow-cooked Southern drawl. “My wife shouldn’t have let us go. I shouldn’t have been stupid enough to go. We couldn’t afford it or anything.”

The plan in Auckland was to write a novel, the autobiographical tale of a young Southern man who moves to New York City. (Robertson was born and raised in Salisbury, North Carolina.) He finished the book, but it remained in his desk drawer. “I think I write fairly well, but I learnt during that year that I am not a novelist by any stretch of the imagination,” says Robertson.

The year in New Zealand turned out to be fruitful nonetheless. While there, Robertson came up with the idea for Tiger Management, the hedge fund that would eventually turn him into a financial legend and billionaire. And his wife gave birth to their third child (another son) shortly after their return to the States. “New Zealand just became a magical place for us,” says Robertson.

Nearly two decades later, that magic became manifest in the form of three world-acclaimed, high-luxury New Zealand lodges. In 1995, Robertson went back to look over a working sheep farm near the Bay of Islands on the North Island. The 6,500 rolling acres also happened to include virgin rain forests with mind-bogglingly huge kauri trees, waterfalls, three private beaches flanked by black lava flows, and the volcano that produced them. He decided to buy it on the spot. Shortly thereafter, he says, “I came to realise that it was so much more fabulous than I’d ever dreamt. To have all of this right by the sea is just amazing.” 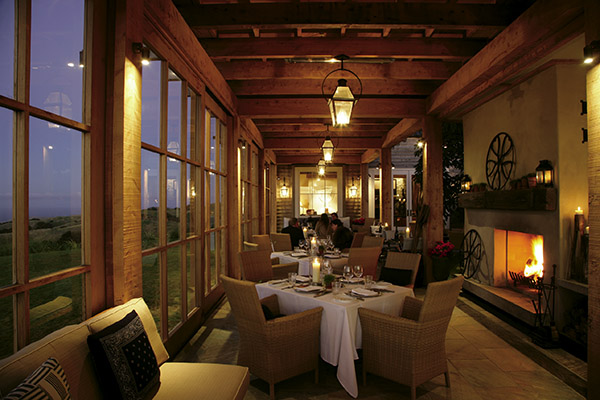 CAPE KIDNAPPERS The lounge at Cape Kidnappers, where everyone gets a window seat

More than 10 years after opening, Kauri Cliffs still feels fresh. In both the Southern plantation-style main lodge and the 11 cottages, the scale of the accommodations is impressive, the details unfailingly tasteful. The international staff is friendly without being familiar, and an old-world formality prevails in the jackets-for-dinner policy.

Golf put Kauri Cliffs on the map, and while guests can hunt boar and scuba dive, it’s still a golf resort at heart. The par-72 course, designed by David Harman and resplendent with views of crashing waves on 15 holes, is ranked among the top courses in the world.

Once Kauri Cliffs opened, Robertson was bitten by the bug: In 2001, he purchased another sheep farm—this one 6,000 acres—on stunning Hawke’s Bay on the southeast coast of North Island. “It was just such a magnificent property, I couldn’t help it,” he explains. The Farm at Cape Kidnappers took Robertson six years to fully build out and opened in 2007. It reprises some of the Kauri Cliffs themes but tones down the golf a notch. (The Tom Doak course is still world-class but out of sight, down a hill from the main buildings. Guests can commute to their rounds via helicopter.) The main lodge resembles an enormous barn, all tumbled river stone and weathered wood, wagon wheels and vintage farm implements, sheep photos, and cheerful primitive art. A silo houses a cozy lounge with window seats almost all the way around. 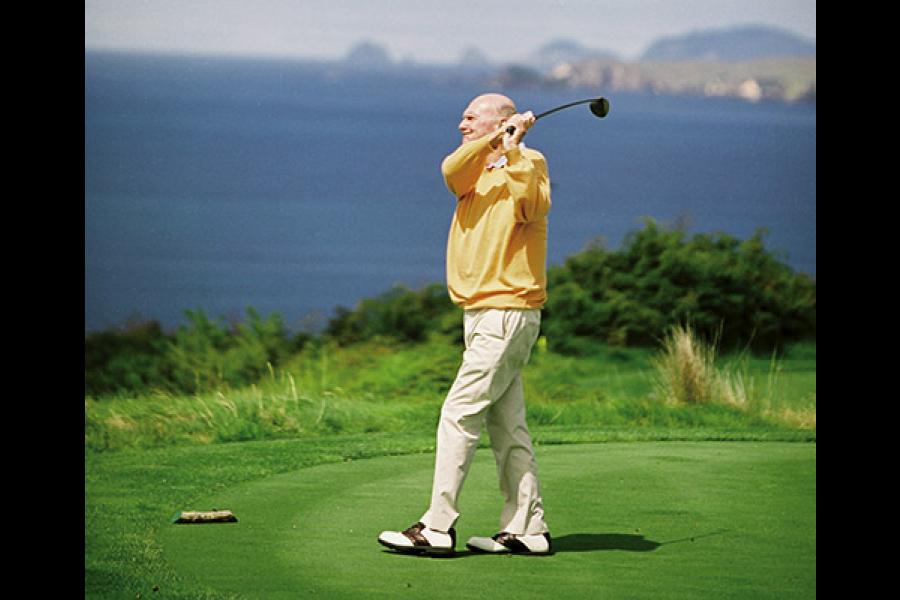 Image: Getty Images
JULIAN ROBERTSON hits a shot at Kauri Cliffs, where 15 of the holes on the David Harmanč¬€esigned course boast ocean views
Most of Cape Kidnappers’ 24 guest rooms are in separate buildings and have gas fireplaces, wide verandas, and spectacular views of hills tumbling down to the Pacific. Walking trails crisscross pastures, primordial forests, and a field with 6,000 lavender plants. Hawke’s Bay also happens to be a prime location for winery tours (including Robertson’s own Te Awa).

But Robertson’s lodge-building days didn’t end there. In late 2009, he bought the final piece (to date) in his New Zealand collection. Matakauri Lodge, just outside of the South Island adventure capital of Queenstown, takes the best of its big brothers and translates it to an overtly adrenaline-soaked environment. It’s both more intimate, with only 11 rooms around a compact main lodge on 15 acres, and bolder in design, with an orange-and-yellow palette, and full walls of aluminum and glass. Guest rooms incorporate niceties like heated floors and TVs smartly hidden behind black-and-white landscape photographs. The big draw is the location: It’s on the shore of the alpine Lake Wakatipu, just a ten-minute drive from Queenstown’s restaurants and activities (jet boats, paragliding, and the country’s original bungee jump, as well as hiking and skiing), yet sequestered from the town’s throngs of Australian revelers. Then there’s that astonishing view of the well-named Remarkable Mountains from every double-height window.

Robertson takes pains to emphasise that his lodges aren’t a lark: He runs them as a business. And while Kauri Cliffs and Cape Kidnappers basically pay for themselves as working farms, and the appreciation on the land alone makes them solid investments, Matakauri actually turns a neat profit, thanks mainly to its proximity to Queenstown. “I think it can be a real benefit to New Zealand that we can run a first-class business that fits into their way of life,” says Robertson. (This March, Robertson is offering what he calls the ‘Tiger Tour’, a ten-day, $25,000, private jet jaunt through all three properties.) 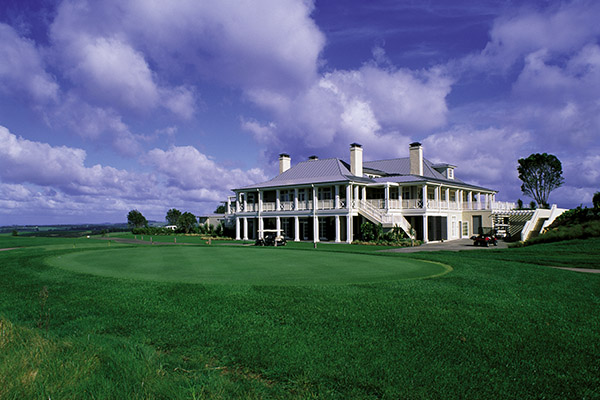 KAURI CLIFFS Once a 6,500-acre working sheep farm in North Island, it is now one of the top golf
resorts in the world

After all, New Zealand has given him something irreplaceable. “My wife always adored the country and these places. My kids all love them, and Jay [his middle son] now manages the properties. My grandkids love them as well and actually are quite emotional about them,” Robertson adds. “We just lucked into something that really became a very happy and big part of our lives.”

He’s given back to the country: In 2009, he donated 15 paintings to the Auckland Art Gallery, including works by Picasso, Cézanne, and Matisse. Later that year, he became an honorary New Zealand knight. (“The ‘honorary’ part means you can’t call me ‘sir’,” he says.) But the lodges, he hopes, will be his most lasting contribution to the country he has come to love. “My greatest success with these places would be to have them serve as a model for development, the kind that enhances—or at least doesn’t detract from—nature and the natural beauty of the place,” says Robertson. “I hope that lives on forever.”