Apple's profit fell 3.1% to $13.69 billion in the latest quarter, from $14.13 billion a year ago, largely because of continued declines in iPhone sales. Yet the results beat analysts' expectations and were quickly cheered by investors because of indications that its new iPhone models would be a hit 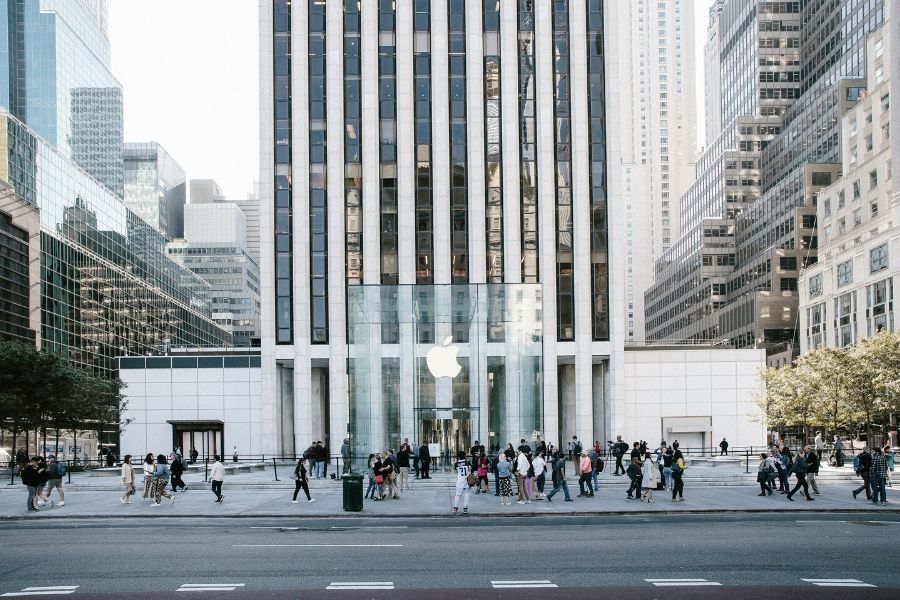 The Apple store on Fifth Avenue in New York, on Sept. 19, 2019. The company said its profit dropped 3.1 percent from a year ago, but there are early hints that new iPhones are selling well heading into the holidays.
Image: Haruka Sakaguchi/The New York Times

SAN FRANCISCO — Apple said Wednesday that its profit shrank for the fourth consecutive quarter — the longest such streak since 2016 — but it forecast that better days were ahead.
The tech giant said its profit fell 3.1% to $13.69 billion in the latest quarter, from $14.13 billion a year ago, largely because of continued declines in iPhone sales. Yet the results beat analysts’ expectations and were quickly cheered by investors because of indications that its new iPhone models would be a hit. Apple reported a 9% fall in iPhone sales in the quarter, smaller than the declines in other recent quarters. More important, the company said it expected strong sales in the current holiday quarter — news that seemed to confirm Wall Street expectations that people like the iPhones introduced last month. Apple also showed signs of recovery in China, a crucial market where the company had struggled for months. After a drop in sales of roughly 20% in the region over the previous nine months, Apple said sales there were down 2.4% in the last quarter. The results suggested that the issues causing Apple’s business to shrink in China and elsewhere in recent months had been resolved — or at least temporarily patched. Apple had blamed some of its struggles in China on the country’s slowing economy and its trade war with the United States. Luca Maestri, Apple’s finance chief, said in an interview Wednesday that those issues were subsiding. “These trade tensions have not been helpful to the Chinese economy and to our business, and we think that as you’ve seen from our results, the peak of those tensions were at the beginning of the year,” he said. Apple got off to a rocky start this year when it cut revenue forecasts because of slow sales in China, prompting a sharp sell-off of its stock. Since then, Apple’s financials have improved, and its market value has rebounded. Apple shares rose about 2% in after-hours trading Wednesday. “The company is still benefiting from low expectations, from when they set the bar really low” in January, said Tom Forte, an analyst at D.A. Davidson. “And since then, they’ve been telling a different story, which is that they’re pivoting to be less dependent on the iPhone.” Apple became a $1 trillion company on the back of the iPhone, one of history’s most successful products. But as the smartphone market became saturated, Apple increased iPhone prices to keep growing. The strategy worked for a time. But as prices went up, sales of new phones slowed, particularly in markets like China. In recent months, Apple has propped up iPhone sales in places like China with price cuts and financing. Apple’s latest iPhones — the iPhone 11 family — seem to be bucking the trend. The latest quarter represents just nine days of sales of the iPhone 11, but the drop in iPhone sales were lower than in the previous three quarters. “It’s obviously a bit early,” Maestri said. “But the initial signs are very positive.” Apple’s overall revenue increased 1.8% to $64 billion in the quarter ending in September. Apple predicted $85.5 billion to $89.5 billion in revenue for the current quarter, compared with $84.3 billion a year prior. Many analysts had increased their estimates for iPhone sales in recent weeks after certain signs, including reports from factories in China, suggested that demand for the new phones was strong. Analysts attributed some of that success to Apple’s decisions with the latest phones, including dropping the price of its flagship phone while adding an additional camera lens to its higher-end models. Apple has made up for the declines in iPhone sales with growth in other areas, such as wearable devices like the Apple Watch and AirPods, as well as its business of selling apps and other services like music and news. Wearables revenue grew by 54% to $6.5 billion, and services revenue increased by 18% to $12.5 billion in the quarter. Apple is trying to bolster that business with a gaming service introduced last month and a streaming service set to start Friday.