As protesters fill Hong Kong's streets, businesses are alarmed too

A wave of concern has spread through the community of foreign consultants, investors and executives who depend on Hong Kong as a safe base from which to do business in China 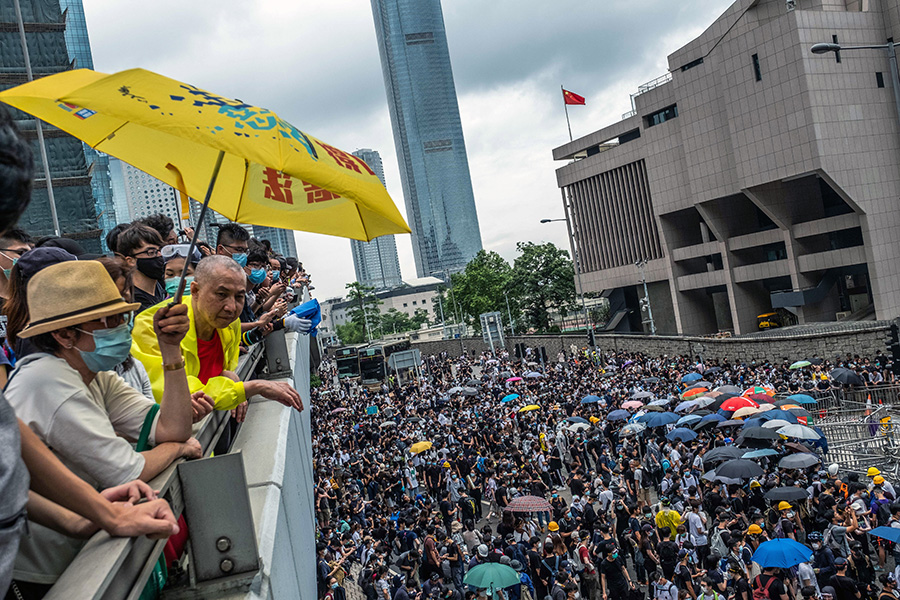 Protesters gather outside the Legislative Council in Hong Kong on Wednesday, June 12, 2019. Demonstrations this week over a proposed law that would allow extraditions to mainland China have produced some of the city’s biggest shows of dissent in years. (Lam Yik Fei/The New York Times)

HONG KONG — As tens of thousands of protesters returned to Hong Kong’s streets on Wednesday to speak out against a proposed law that would allow extraditions to mainland China, one prominent voice has been largely silent: big business.

But quietly, a wave of concern has spread through the community of foreign consultants, investors and executives who depend on Hong Kong as a safe base from which to do business in China.

No major company dares to speak out publicly for fear of angering the Chinese government. Behind the scenes, they are grappling with difficult questions about whether the legislation would endanger foreign executives or undermine the city’s legal system, a preferred venue for resolving disputes over the mainland’s Communist Party-controlled courts.

“The business and financial community is deeply concerned about what this may augur for Hong Kong,” said Fred Hu, founder of the investment firm Primavera Capital Group and former head of Goldman Sachs’ Greater China business.

The law could broadly threaten Hong Kong’s place as a middle ground between China and the business world. As the protests gathered steam in Hong Kong on Wednesday, Nancy Pelosi, speaker of the U.S. House of Representatives, issued a statement questioning whether Washington should reconsider a law that exempts Hong Kong from some of the trade and technology limits it imposes on the rest of China.

“Congress has no choice but to reassess whether Hong Kong is ‘sufficiently autonomous’ under ‘one country, two systems’ framework” if the government passes the bill, she said, referring to the arrangement that allows the Chinese city to function under its own laws. 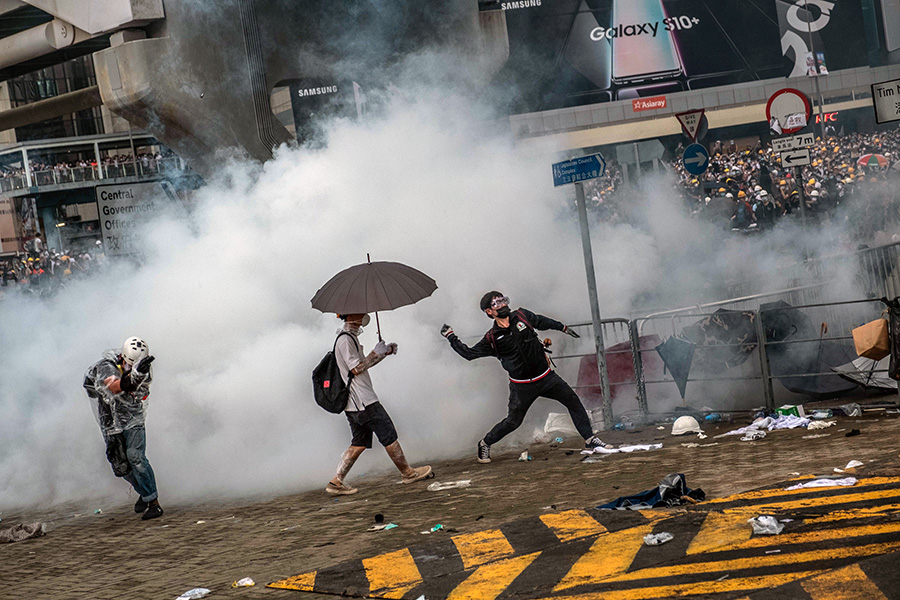 Protesters are engulfed in tear gas near the Legislative Council in Hong Kong on Wednesday, June 12, 2019. Demonstrations this week over a proposed law that would allow extraditions to mainland China have produced some of the city’s biggest shows of dissent in years. (Lam Yik Fei/The New York Times)

Hong Kong’s stock market fell 1.7% Wednesday in an otherwise quiet trading day in Asia, as protesters filled up a main transportation artery where multinational companies and international banks occupy much of the gleaming skyscraper real estate. The police used tear gas on protesters Wednesday afternoon on the same streets and sidewalks that bankers and lawyers for some of the world’s biggest companies travel on their daily commutes. Employees at major banks like HSBC and accounting firms like Deloitte were told to work from home in anticipation of grinding traffic and concerns about safety.

There were signs on Wednesday that tensions in Hong Kong were already undermining business confidence. A Hong Kong property developer called Goldin Financial Holdings cited “recent social contradiction and economic instability” for its decision this week to walk away from its $1.4 billion bid for a plot of land at the city’s former Kai Tak airport. It did not detail its concerns.

For big business, Hong Kong was supposed to be safer than this.

When the British handed over Hong Kong, a former colony, to China in 1997 under the policy of “one country, two systems,” there was a promise that the territory would continue to operate under relative autonomy. Though Beijing effectively controls the system by which Hong Kong picks its top leaders, the city enjoys wide freedoms of speech and of the press. The government takes a light hand compared with the mainland when it comes to business regulation, and its courts are considered independent and well run.

For decades, major companies parked their Chinese or Asian headquarters in Hong Kong, making the city a major nexus of finance and commerce, though some of that power has ebbed as China grew wealthy in its own right and more companies began to deal with that market directly.

Last year, the American Chamber of Commerce in Hong Kong said that over half of its respondents were concerned about the rule of law. Business leaders cited a move by the Hong Kong government to reject a standard request by a journalist to renew his work visa last year as a major setback for Hong Kong’s independence. While the city government declined to disclose a reason, it appeared to be in response to the journalist hosting a talk with Andy Chan, the leader of a small political party that calls on Hong Kong to secede from China.

The trade war between the United States and China also threatens to make Hong Kong a bargaining chip. On Monday, a State Department spokeswoman said that “the continued erosion of the ‘one country, two systems’ framework puts at risk Hong Kong’s long-established special status in international affairs.”

“The extradition bill is worrying because for business it starts to call into question whether there is now a blurred line between politics and business in a city that views itself as a commercial capital that puts business first,” said Tara Joseph, the president of the American Chamber of Commerce in Hong Kong.

Yet even as U.S. companies, sometimes privately, have expressed increasing concern about the bill, it was too early to say whether they would pull out of Hong Kong and move operations elsewhere. “People are talking about what this bill could mean and what their possible alternatives could be, but there are no immediate answers,” Joseph said.

One fear among businesses is that the United States could begin treating Hong Kong as if it were just another Chinese city. Under a 1992 law called the United States-Hong Kong Policy Act, the city enjoys special treatment for customs and commercial purposes. Changing or eliminating that law could crimp Hong Kong’s status as a business crossroads.

In recent days, as the front pages of U.S. newspapers displayed images of the protests, lawmakers in Washington have taken greater interest in the territory, according to two people with direct knowledge of these meetings but not authorized to speak publicly.

Many have cited the most recent Hong Kong Policy Act Report by the State Department in March that reported an increased “tempo of mainland central government intervention in Hong Kong affairs — and actions by the Hong Kong government consistent with mainland direction.” Despite this, the report concluded that Hong Kong continued to have a sufficient degree of autonomy. 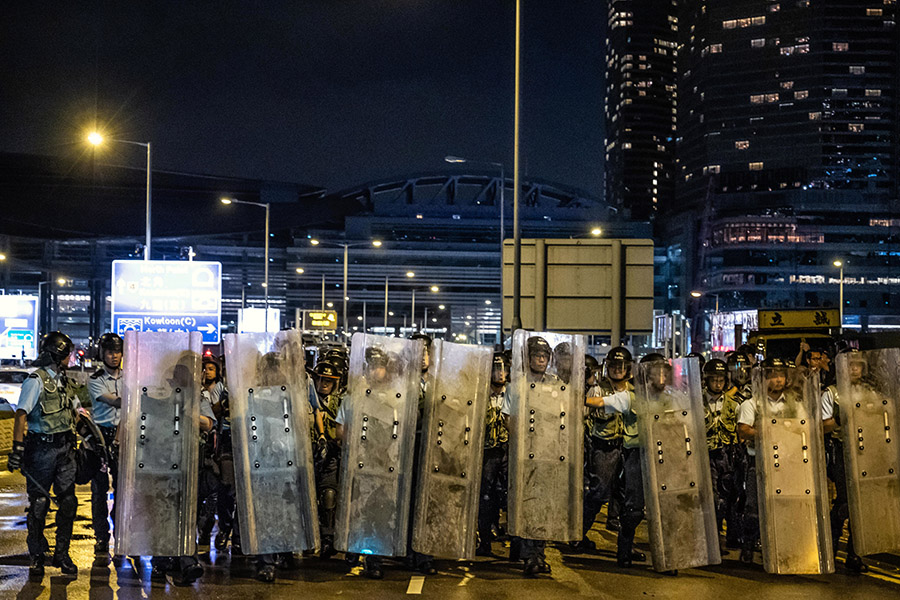 Riot police form a line as demonstrators gather outside the Legislative Council building in Hong Kong early on Wednesday, June 12, 2019. Protesters in Hong Kong, angered by the government’s refusal to back down on a contentious bill that would allow extraditions to mainland China, are preparing more actions this week as lawmakers resume debate on the legislation and accelerate the final vote. (Lam Yik Fei/The New York Times)

Unlike big companies, many small businesses in Hong Kong have been outspoken against the legislation, worrying that it could permanently damage Hong Kong’s economy. More than a thousand of them closed on Wednesday in solidarity with the protesters. The city’s historically weak labor groups asked workers to call in sick.

On Instagram, hundreds of coffee shops, restaurants and other businesses posted pictures with the hashtag “#612strike.” One online floral company called Floraholic wrote, “Hong Kong is sick, let’s take a day off for some rest!”

“Striking is the only action we could take,” said Yanki Lam, co-owner of a company called Changchang Goodstore in the city’s Kowloon district.

The Eaton Hong Kong, a hotel and co-working space, said it would allow its employees to attend the protests on Wednesday, saying that “we respect our team members’ political stances.”

Yet even with this growing sense of concern, foreign businesses that speak out could face retribution from the Chinese government.

“It’s almost impossible for foreign companies to do business in China without the approval of the mainland government. Quite rationally, they don’t want to stick their heads above the parapet,” said David Webb, a former banker and the publisher of the financial and corporate governance website Webb-site.

There is also a sense of resignation from big companies that rejecting the extradition legislation will do little to address a bigger problem of China’s growing reach into the city, Webb said.

“No amount of padding around the extradition treaty is going to fix that,” he said.