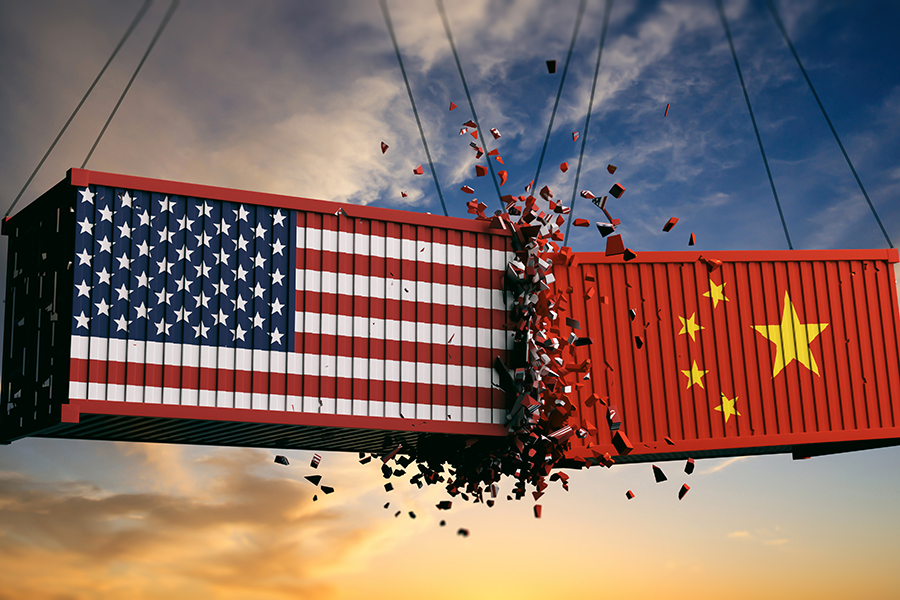 As the global business and political elite gather at Davos this year, the question remains open: Is the trade war on? Or is it off again?

As far as China and the U.S. are concerned, a tenuous truce seems to have been declared. An agreement signed last week, Phase One, eases some Trump administration sanctions on China in return for Beijing’s vow to step up its purchases of American farm products and other goods.

But cheer not. Few experts believe that this opens a path to Phase Two and beyond.

The ongoing trade challenges lie not only with China. In an election year, the Europeans, with their trade surpluses in autos and luxury goods, could also be a tempting target for President Donald Trump.

Adding to the uncertainty is the administration’s decision to block the World Trade Organization from adding members to its appellate court, crippling the organization’s ability to rule in trade disputes.

If South Korea and Japan, or Brazil and the European Union, have a trade conflict, they no longer have anywhere to take it.

Long-term investment and elaborate supply chains depend on a degree of predictability. Dependable good-faith trade agreements backed by WTO arbitration were ways of ensuring that.

But beyond the immediate political environment — and whether or not Trump is reelected — larger trends are standing in the way of any return to the golden age of globalization so beloved by those who attend Davos.

The extraordinary growth in global trade that occurred between the 1970s and 2008 was fueled in large part by the profusion of enormous bulk carriers, the widespread adoption of shipping containers and the movement of hundreds of millions of Asian workers from the countryside to factories serving the world market.

It was a one-off shift, which explains why growth in global trade is now slowing. But it also left a legacy of social and political tensions.

Swing voters in the Rust Belt helped put Trump in the White House. Those states are reeling from a half-century of traumatic structural change: domestic deindustrialization compounded by the way global trade has shifted manufacturing jobs to places like China and Mexico from places like the Midwest.

This is not just an American story. There are also rusting industrial plants and dilapidated company towns all across Europe and Asia.

But in few places has the collapse of the old model of industrialism left scars deeper than in the U.S. The failure of America’s policymakers to deal with these structural changes over the last half-century leaves large parts of the country’s population uncertain and angry.

It is a recipe for backlash, and Trump has capitalized on it. But even before America unleashed its campaign against the WTO, the multilateral trading system was in trouble.

The Doha Rounds of WTO talks, intended to improve trading prospects for developing countries, have been dead since at least 2008. Few people who know the workings of the WTO and its appellate body would sing their praises. Their creaky, slow-moving procedures are a thin reed on which to hang the future of the world economic order.

Furthermore, when officials like Robert Lighthizer, the U.S. trade representative, declare that the system must be changed because it was not designed to deal with the ascent of China, they have a point.

China’s scale and pace of development, its no-holds-barred approach to competition and the authoritarian regime that backs it fundamentally put in question the liberal model of globalism and win-win trade relations.

It is barely an exaggeration to say that the history of economic development, played out according to Western rules — the narrative that began with Adam Smith’s doctrine of free markets in the 18th century — starts to look like only a preface to an age of competition between large economic blocs.

The Europeans increasingly look like the last man standing when it comes to free trade. The U.S., with its long history of protectionism, was always a somewhat reluctant recruit to the camp of free trade. In the 21st century, with the emergence of China and India, the U.S. has company on the global stage.

China, under its current rulers, is a resurgent and assertive nation-state that poses a fundamental challenge to the power position America built in Asia during the Cold War. What is at stake is more than trade. It is geopolitics.

This was made explicit by the Obama administration and its talk of an “Asia pivot,” with Barack Obama focusing more on the rise of Asia and less on the Middle East. Superpower competition reduces Trump’s Phase One trade deal with its discussions about soybeans to a sideshow. What matters is the intersection of military and industrial policy in the tech arena — 5G and AI, not steel and agriculture, will shape the future balance of power.

This new competition brings to mind the Cold War.

China is ruled by a Communist Party that pays lip service to the cult of Mao. America’s positions in Korea, Japan, Taiwan and the South China Sea are legacies of that era. But in the Cold War with the Soviet Union there was never the depth of economic, technological and cultural interconnection that the West has forged with China since the 1980s.

As an alternative historical analogy, some are tempted to invoke the rise of Imperial Germany before 1914 with which the British Empire entertained a similar mixture of rivalry and cooperation. But that comparison belittles the significance of China’s reemergence.

What we are witnessing is a world event of a different order from Bismarck’s accomplishments. And the global conditions under which this competition takes place are far more pressing.

The first Cold War gave us a vision of global apocalypse centered on nuclear weapons. By the 1980s, we were terrifying ourselves with talk of nuclear winter. That was a nightmare that would be triggered by miscalculation.

The climate challenge that we currently face arises not from a nuclear standoff gone wrong, but from our economic system. The huge expansion and relocation of industrial production that have driven the expansion in trade in the last half-century have also blown out the global carbon budget.

On the day after the presidential election this November, the Trump administration has said it will remove the country from the Paris climate accord. That agreement, for all its inadequacy, is humanity’s best effort to encompass the scale of the planetary challenge we face.

If we are serious about decarbonization, we need to take an enveloping approach not only to domestic emissions but also to trade in carbon-intensive goods. If labor costs and migrant workers were the trade policy issues of the 20th century, carbon border taxes are the frontier of trade policy in the 21st.

The push to decarbonize the great centers of global industrial production must be negotiated between the major trading powers.

The U.S. is already sidelined at gatherings like the Group of 20. It is no longer the world’s most important emitter of carbon dioxide or the No. 1 trading partner for much of the world.

Trump’s actions and policies put the onus more firmly on the Europeans and the Chinese to find a way of shaping the new environmental politics of trade — if necessary, without the U.S.