"We don't want to be defined by the scandals, the corruption, and the greed exhibited by the company's leadership," the group, which calls itself the WeWorkers Coalition, wrote. "We want to leave behind a legacy that represents the true character and intentions of WeWork employees." 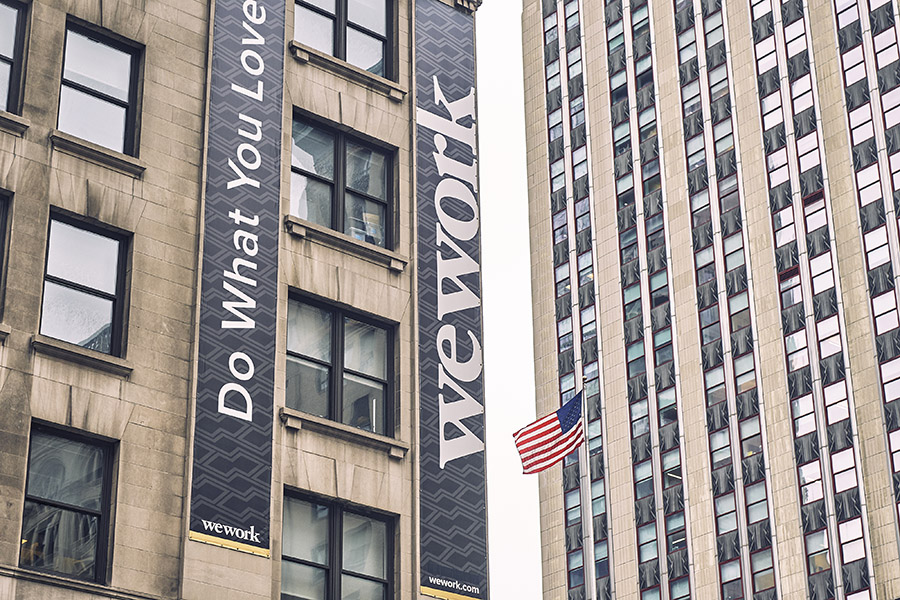 A WeWork location in New York, Oct. 22, 2019. The struggling office-space giant is cutting its workforce, leading to a demand by employees that those who are laid off receive severance pay, continued health benefits and compensation for devalued stock options. (An Rong Xu/The New York Times)

In the latest sign of worker activism in tech companies and startups, a group of employees at the struggling office-space giant WeWork are calling on management to treat workers humanely as the company prepares to lay off thousands, and to give workers a say in corporate decisions and policies.

Alluding to the controversies that have dogged the company and its co-founder Adam Neumann, the workers said in a letter to management that they were seeking to restore values they say top executives disregarded. Under an exit package worth around $1 billion, Neumann agreed last month to give up control of WeWork.

“We don’t want to be defined by the scandals, the corruption, and the greed exhibited by the company’s leadership,” the group, which calls itself the WeWorkers Coalition, wrote. “We want to leave behind a legacy that represents the true character and intentions of WeWork employees.”

WeWork leases office space, refurbishes it and then rents it out to customers. As it has expanded across the world at breakneck speed, the company’s costs have far exceeded its revenue. The company is now trying to shut down or sell noncore businesses, withdraw from unprofitable markets and cut its workforce, which totaled more than 12,500 people at the end of June.

Facing a cash crunch, WeWork secured a multibillion-dollar bailout last month from SoftBank, the Japanese conglomerate, which is its largest outside investor. Marcelo Claure, a SoftBank executive who was appointed WeWork’s executive chairman, is overseeing the restructuring. In September, WeWork withdrew an initial public offering after investors balked at buying shares in a company with huge losses and weak corporate governance.

In their letter to management, which was delivered Tuesday, employees refer to the financial hardship many of them will soon face as a result of the restructuring and demand that those who are laid off receive severance pay, continued health benefits and compensation for devalued stock options.

More than 150 WeWork employees have signed the letter, and more than 500 have joined a channel on Slack, the corporate messaging system, that the group set up last weekend. Alan Friedman, a WeWork software engineer who helped organize the coalition, said the group included engineers, architects, customer support representatives, cleaning staff and other employees.

In a statement, a spokeswoman for the company, Erin Clark, said Claure “cares deeply about our employees and treating those who are laid off as part of the restructuring fairly, with dignity and respect.” She said he welcomed “feedback” from employees.

On Thursday evening, Claure responded to the group with an email that indicated he took their concerns seriously but offered little elaboration and did not acknowledge the workers’ request for a meeting.

The letter also asks WeWork to be open about the fate of cleaners and other facilities employees who were recently informed that the company planned to transfer them and the work they do to an outside contractor.

The letter writers reserved particular animus for Neumann, noting that the $46 million annual consulting fee SoftBank awarded him for four years is higher than the compensation of all but a small number of public company chief executives in the United States last year.

“We are not asking for this level of graft,” the workers wrote. “We are asking to be treated with humanity and dignity so we can continue living life while searching to make a living elsewhere.”

Friedman said the idea for the coalition came about in late October, as he and several fellow engineers sought to combat a feeling of powerlessness. This smaller group, known as the committee, enlisted others through messaging apps.

In interviews, workers involved in the coalition said they had believed in the company’s mission of creating a community for office workers, only to become disillusioned by the antics of Neumann and his inner circle.

“The initial thing of ‘making a life, not a living,’ ‘community,’ ‘better together’ — the terms WeWork pushed as marketing also seeped into this company’s culture in a very real way,” said Kevin Hsieh, a software engineer involved in the group. “There is a looming sense of betrayal and frustration that that wasn’t necessarily followed everywhere.”

In the letter, workers say their concerns go beyond the coming layoffs. The coalition wants more input into how the company is managed because “we’ve seen what can happen when leadership makes decisions while employees have no voice,” though it doesn’t elaborate on its preferred way of influencing management.

The group says it also wants to ensure that the company responds appropriately to accusations of sexual misconduct, increases diversity and eliminates the requirement that employees resolve claims against the company through arbitration rather than in court.

Last week, a former WeWork employee filed a complaint against the company and Neumann contending that she had been discriminated against for becoming pregnant and taking maternity leave. The complaint, filed by Medina Bardhi, who worked as Neumann’s chief of staff, said he had referred to her maternity leave as a “vacation” or “retirement.” The company has said it will defend itself against the complaint.

In their willingness to make collective demands, the workers appear to echo the actions of employees at several tech companies, including Microsoft, Amazon and Google, where 20,000 employees walked off the job last fall to protest the company’s handling of sexual harassment. After the protests, Google agreed to end forced arbitration for employee disputes.

Members of the WeWorkers Coalition say they received advice from workers at the crowdfunding site Kickstarter, who have been trying to unionize. But in line with workers at other companies, like Google, they say it may be more practical for them to engage in collective action without first trying to create a union.

Some workers in other industries have won concessions from employers facing financial distress by organizing, including workers at Toys “R” Us, which filed for bankruptcy in 2017. Two private equity funds that owned the retailer agreed last year to establish a $20 million fund for laid-off employees.

At a meeting with employees in Manhattan last month, Claure, the SoftBank executive overseeing WeWork, said that he would focus on profits over growth and that there would be layoffs, but he did not say how many.

On Friday, WeWork released a presentation about how its business is doing. Locations open more than two years had an operating profit margin of 21% for the first six months of the year, excluding certain expenses. But many of its locations had been open for less than a year and those were barely profitable or losing money.

The company also confirmed its plans to get out of some businesses and layoff workers, without saying how many.

Tweets by @forbes_india
What's next for photo-editing app VSCO?
How lies and mistrust hurt the American economy