Can one LED light give you perfect skin?

Light-as-a-skin-care concept is not new. Think of it as a skin-friendly visible light—ultraviolet light's benevolent counterpart—which alters biological material. While UV rays can catalyse cancer and ageing, some wavelengths of visible light alter our skin for the better 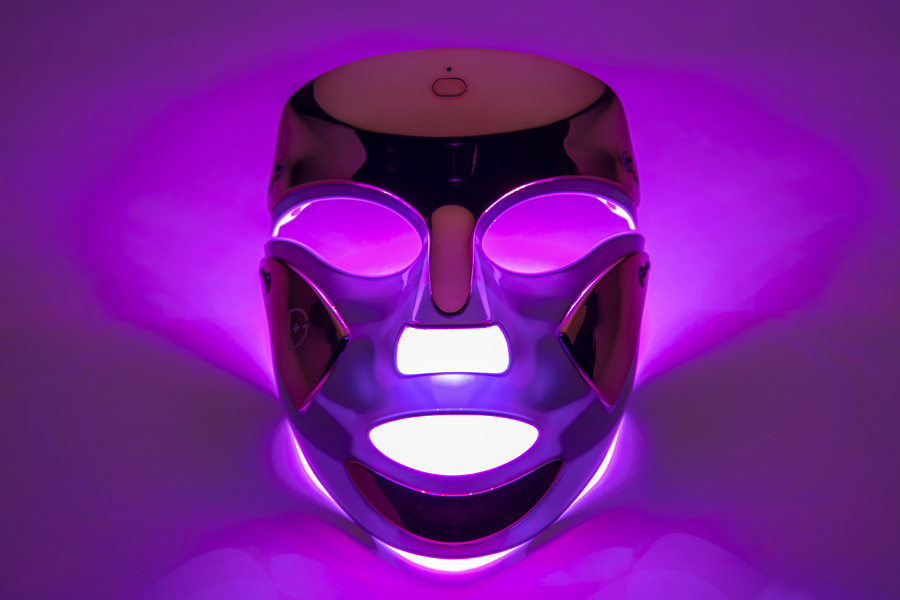 The MMSphere, designed by Dr. Ellen Marmur, that has settings for blue, green, amber and purple light, in New York, Oct. 17, 2019. One day, shining light on your face may be the most important part of your skin care routine. (Tony Cenicola/The New York Times)

The MMSphere, a ring of LED lights, casts a red glow over my face. It sits adjacent to my laptop so that as I write, research and procrastinate, I can simultaneously calm a fiery constellation of acne on my left cheek. Red light’s anti-inflammatory and collagen-building effects on the skin are well documented. But this hands-free device, designed by Ellen Marmur, a dermatologist in New York, has settings for blue, green, amber and purple light too.

“It has just enough variety that people stay excited to use it,” Marmur said.

I, too, begin cocktailing. I bathe my face in blue light to kill acne bacteria while watching reruns, and immediately follow up with a FaceTime call to my mother, my face lit up in a bright green light to fight hyperpigmentation.

Even with persistent acne as a motivator, I’ve always had trouble following LED protocols. The MMSphere ($495) is a big deal for me because it harnesses a powerful fix-everything-while-doing-nothing ease that makes it almost addictive. You actually want to use it.

“It makes people feel good, like they’re taking care of themselves,” Marmur said. “You can treat your skin while doing other things, so it’s easier to form the habit of doing it every day.”

Because, really, if we’re just sitting around — talking, eating, working — shouldn’t we be fixing our skin, too?

So how does LED work?

First, LED therapy is not the same as a laser treatment, which creates controlled damage to the skin to promote healing. The easiest way to understand the light-as-skin-care concept is to think of skin-friendly visible light as ultraviolet light’s benevolent counterpart.

In a process called photobiomodulation, light alters biological material; for example, UV rays from the sun change our skin in ways that can catalyze cancer and aging.

But some wavelengths of visible light alter our skin for the better, and light-emitting diodes (LED) are a source that delivers that energy.

Jared Jagdeo is an associate professor of dermatology and director of the Center for Phototherapy, SUNY Downstate Health Science University, where he studies LED therapy.

“You can alter the skin through photo-damaging with lasers, or photobiomodulation, which is a much more gentle way of changing the way the skin functions,” Jagdeo said. Red and blue light are the heavy hitters. He explained why red light in particular works so well.

“There’s a specific receptor in the mitochondria of the skin cells that red light specifically acts upon,” he said. “And that’s why red light is an ideal wavelength for changing the way the skin functions.”

Red light penetrates the skin deeper than other visible light and stimulates the mitochondria, which has an anti-inflammatory and rejuvenating effect. Collagen is built in the dermis, the skin is calmed, and wrinkles eventually fade.

Blue light doesn’t penetrate the skin as deeply but zaps acne-causing bacteria on the surface. The science on green light isn’t as solid, but in theory, it targets melanocytes, discouraging excess melanin production.

Rigorous independent studies have yet to be conducted, but Marmur did a very small clinical trial on green light for the MMSphere in which subjects self-reported a 32% decrease in “brown spots” after a week of green light treatment.

And what about those other colors?

The MMSphere emits five different colors of light and shuts off after a 20-minute session. Its violet is a combination of red and blue light, so you get both colors in one treatment.

MMSphere’s last color, amber, doesn’t have much of a skin care benefit, but it may be a mood booster, and is sometimes used to treat seasonal affective disorder.

Is all of this light OK for my eyes?

Eye safety is a valid concern, particularly because earlier this year Neutrogena recalled its LED mask over fears that it could cause eye injuries.

Brian S. Biesman, an assistant clinical professor of ophthalmology, dermatology and ENT at Vanderbilt University Medical Center in Nashville, said that most home devices aren’t powerful enough damage the eyes. The MMSphere comes with opaque goggles, but, Biesman said, the device is low energy, so it should be safe to use without them.

“Just normal blinking and eye movements should be sufficient to protect the eyes,” he said. “But never stare at a bright light source.”

How do I know if my LED light is working?

This is where things get more complicated. Even though LED devices are everywhere, the science to establish standards for at-home use is nascent. Buy only devices cleared by the Food and Drug Administration, but think of that clearance as a testament to their safety, not their efficacy.

“As far as the FDA is concerned, if I use CO2 laser resurfacing, it better work because of the amount of risk involved,” said Suzanne Kilmer, a clinical professor of dermatology at the UC Davis School of Medicine in Sacramento and director of the Laser and Skin Surgery Medical Group.

“Compare that to a home device,” Kilmer said. If it doesn’t kill you, blind you or make things much worse, it’s probably going to get approved. So it’s actually more incumbent upon the people selling home devices to show efficacy. You have to trust the people who are selling them.”

“LED is real, but it’s probably not optimized yet,” Kilmer said.

Many factors determine the amount of light your skin needs and receives: the strength of the light, the distance from source to skin, how long the light is used, and your skin color.

“Some of these lights on the market are very weak, and they may not have enough energy output to actually have a biological effect,” Jagdeo said. “Imagine a glow stick. It produces a color. But you could shine it on your face all day, and it’s not going to change the way your skin works.”

Furthermore, the medical community has yet to establish standard doses for treating conditions like hyperpigmentation and acne at home. Marmur based her MMSphere dosing on Blu-U, an in-office blue light that is commonly used as an alternative therapy for precancerous lesions.

“Consistent Sphere treatment for seven weeks will equal the energy given in the office with the Blu-U,” she said.

Another device, the Dr. Dennis Gross DRx SpectraLite FaceWare Pro, $435, emits red and blue light in a mask format, and each session is only three minutes. The mask’s LEDs are in contact with the skin, which may be a more effective treatment. Jagdeo said that you lose some energy on the way from device to skin, a potential downside of the MMSphere design.

“This is a tremendously undertapped area in medicine,” he said. “But LED light therapy is going to revolutionize the way home medical treatment is delivered for skin care over the next 10 to 15 years.”

Tweets by @forbes_india
A forecast for a warming world: Learn to live with wildfires
Ten interesting things we read this week