The acquisition will bolster its presence in North America 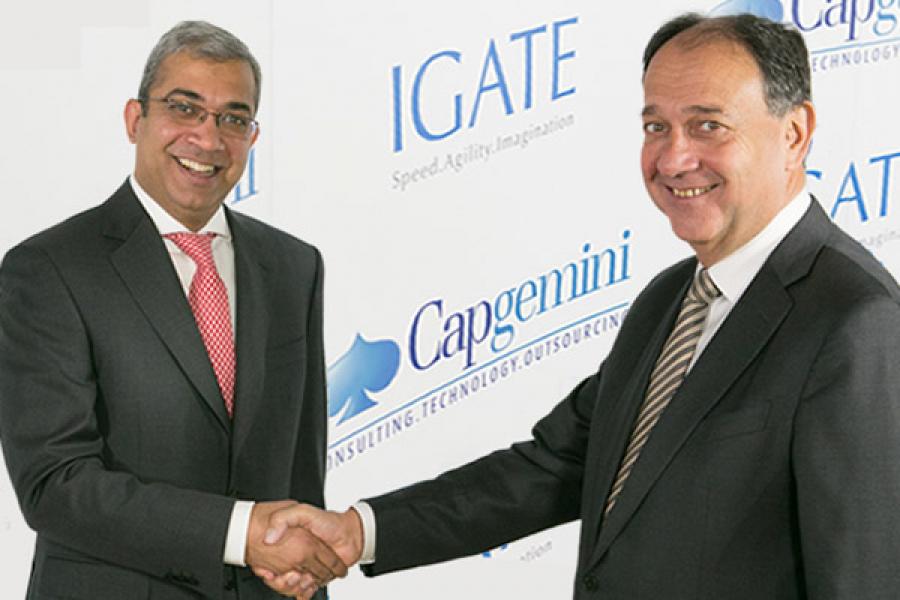 French IT-services major Capgemini on Monday announced the acquisition of US-based IGATE for $4.04 billion in a combination of cash, stock and debt deal. With this acquisition, Capgemini expects to boost its presence in North America, the largest IT-services market in the world.

For the $1.3 billion IGATE, North America is the largest market, accounting for 79 percent of its total revenue in 2014 followed by Europe (14 percent) and Asia-Pacific (7 percent). Capgemini said that IGATE will be acquired for $48 a share.

Nasdaq-listed IGATE, which has a total workforce of 33,000 employees, is expected to further strengthen Capgemini’s key businesses in application and infrastructure services as well as BPO and engineering services. It gives a push to Capgemini’s portfolio with new bluechip clients such as General Electric and Royal Bank of Canada.

“The combination of IGATE and Capgemini increases the group’s revenues in the region by 33 percent to an estimated $4 billion, making North America its first market with approximately 30 percent of the pro-forma combined revenues in 2015. An estimated 50,000 employees will be servicing Capgemini’s North American clients,” the Paris-headquartered IT firm said in a statement, adding that this transaction would lead to a group with an estimated combined revenue of 12.5 billion euros in 2015, an operating margin above 10 percent and around 190,000 employees.

“IGATE perfectly fits our strategic ambition. It will give us a new status on the American market. This will also give a new scale to the group’s Indian operations, allowing us to compete on par with the best US-based and Indian-based companies,” said Paul Hermelin, chairman and CEO of Capgemini.

According to a recent report by US-based HfS Research, 2015 will be the year of “some significant consolidation in the outsourcing industry as prices reach rock-bottom, margins are squeezed to impossible levels and old-world service providers struggle to de-link headcount from revenue growth”. The HfS report released this month prior to the official announcement of the acquisition also pointed out that it would give Capgemini a significant beneficial boost in many capabilities.

“Capgemini has worked hard over the last few years to build its presence in India starting from the acquisition of Kanbay back in 2006. The IGATE delivery footprint may be especially interesting to Capgemini which has been trying to grow its presence in Tier II cities in order to reduce labour costs and IGATE may be an accelerant to this effort,” said the HfS report.

“Most of the leading service providers today are looking at niche buys that specifically add software IP or a vertical capability, such as Cognizant/Trizetto, or Infosys/Panaya. However, in Capgemini’s case, there are still some significant holes in its portfolio that need to be filled out, most notably a more powerful presence in India, a stronger portfolio of US enterprise clients, and a deeper foothold in the financial services. IGATE brings these to the table,” said the HfS report.

Partha Iyengar, Gartner vice president and head of research (India), believes the biggest challenge and hurdle ahead of them is the multi-cultural integration task that lies ahead. “Their track record with Kanbay was not the biggest success, and they need to show that they can do much better with this acquisition, which is a much bigger one as well. They will have to move very quickly to convince clients that projects are safe and that the Cap acquisition gives IGATE clients a much bigger capability and deeper domain expertise in some domains (which it does). If they are not successful in doing this, they risk the flight of clients, especially in the US.”

Commenting on the deal, Ashok Vemuri, CEO, IGATE, said, “In Capgemini, we have found a partner who will advance our ability to innovate and build industry solutions that will enhance the value proposition we bring to our clients. In addition, this powerful combination will provide exciting opportunities for our employees to expand their capabilities.”

Former Infosys board member and head of US business Ashok Vemuri joined as the chief executive of IGATE in September 2013. Vemuri replaced Phaneesh Murthy, who was sacked from the company in May 2013. Vemuri joined the New Jersey-based IT services company at a time when IGATE was going through a challenging phase, addressing concerns such as corporate reputation, sluggish global market, debt and stock market performance.

Sanchit Vir Gogia, chief analyst & group CEO, Greyhound Research, says it’s an expensive buy. “We believe that the acquisition of IGATE by Capgemini is a sweet deal for investors but a surely a deal on the expensive side. While this should ideally help catapult Capgemini’s business in the US, the output will much depend on how Capgemini plans to integrate both the businesses and approach clients for conversations.”

Greyhound Research says IGATE has seen a decline in the margins and its costs have gone up considerably. The company’s revenue increase has been a nominal 10 percent. The company has been on the blocks and has been up for grabs for the past four years. According to them, IGATE’s main strengths have been in the health care, FSI and manufacturing sectors. "The health care sector in the west presents a lot of opportunities, especially in the UK. Also, with the NHS in UK going the privatisation way soon, we believe this surely puts Capgemini in a very well placed and profitable spot."

IGATE, which has significant operations in India, under its former CEO Phaneesh Murthy took some bold moves to compete with larger players such as TCS, Infosys, Cognizant and Wipro. In 2011, it acquired Patni Computer, which was two-and-half times its size for $1.22 billion through an alliance with private equity player Apax Partners. The company had to incur a total debt of $1.03 billion, which also included the cost of delisting Patni. However, that time, experts felt the acquisition gave the much-smaller-in-size IGATE scale, greater access to global customers and the ability to play with larger deals and take on its larger rivals.