Chasing Amazon, retailers are in a never-ending arms race

Retailers like Kohl's and Macy's are caught up in a seemingly never-ending race against Amazon. The more they spend to compete, the more their profits are sapped. And even when they succeed in attracting customers, Amazon responds with new ways of delivering inexpensive items as quickly and conveniently as possible

By Sapna Maheshwari and Michael Corkery 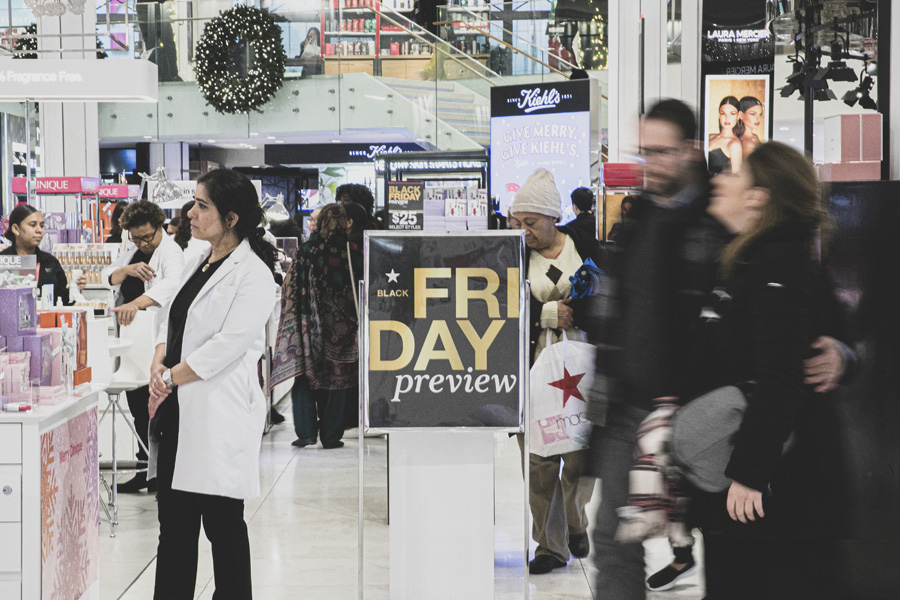 A Black Friday preview sale sign at the Macy's flagship store at Herald Square in Manhattan, Nov. 22, 2019. Retailers are trying everything they can to keep up with Amazon. Macy’s offers same-day delivery and in-store returns for online purchases. (Jeenah Moon/The New York Times)

Retailers are trying everything they can to keep up with Amazon. Macy’s offers same-day delivery and in-store returns for online purchases. Black Friday deals are already starting at Kohl’s. And craft cocktails are served in the women’s shoe department at Nordstrom.

By one measure, these strategies are working. After years when it seemed as if Amazon was swallowing the industry, many large old-school chains like Kohl’s and Macy’s have largely stabilized their lagging sales.

But those victories may be short-lived because retailers are caught up in a seemingly never-ending race against Amazon. The more they spend to compete, the more their profits are sapped. And even when they succeed in attracting customers, Amazon responds with new ways of delivering inexpensive items as quickly and conveniently as possible.

“Is this an arms race that never stops?” asked Christina Boni, a senior credit officer at Moody’s focused on retailers. “That has still to be determined.”

And it’s not just Amazon that has been shaking up the roughly $3.6 trillion retail industry. Dozens of startups, backed by private investors not concerned with immediate profits, have been chipping away at department store offerings, section by section.

The costs are weighing on many retailers, even in a relatively strong economy when consumers are expected to spend heartily during the holiday shopping season, which begins in earnest this week. Just last week, Kohl’s said that its quarterly profit had dropped 24% and that profits for the year would be less than previously thought.

These same online forces have led in recent years to record store closings and prominent bankruptcies like Sears, Toys R Us and Barneys New York and they are pressuring a wider circle of retailers that have seemingly adapted well to the era of online shopping. The result may be that Americans find themselves with fewer places to shop.

“Some retailers are in a tough spot,” said Jay Sole, a retail analyst at UBS. “Sales have gone up, but profit margins have gone down.”

Especially hard hit are the big sellers of apparel and accessories like Nordstrom, which are grappling with the dual costs of running fast and efficient e-commerce operations, while also keeping their stores inviting and relevant.

Last month, Nordstrom opened a giant new store just south of Central Park, the single largest project investment in the company’s 118-year history, featuring 19-foot ceilings and specially commissioned artwork. On opening weekend, the crowds were so thick that shoppers trying on shoes had to take numbers as if they were at a deli counter.

The seven-floor colossus — bigger than a Walmart Supercenter — adds to the retailer’s range of efforts in Manhattan like Nordstrom Rack outlets, new hubs for online returns and a men’s store. Still, as it tries to be all things to all shoppers, Nordstrom’s operating profit margin is nearly half what it was eight years ago. Last week, Nordstrom said its margins had improved slightly in the third quarter as it cut expenses, although sales fell.

At Kohl’s, the strategy to win over customers is less flashy, but no less costly. The department store chain is ramping up discounts to drum up sales ahead of the holidays.

And unable to beat Amazon, Kohl’s is trying to join it. Kohl’s now accepts Amazon returns at many of its 1,100 stores — packing, labeling and shipping the items free — in an attempt to get more people to walk through its doors. The retailer’s chief executive has called the partnership its “single biggest initiative” of the year.

Competing with Amazon has never been a fair fight. For decades, the online giant has appealed to investors by growing quickly, even as it lost money on shipping, building out its warehouses and developing gadgets like the voice-activated Echo with Alexa. Amazon also runs a cloud computing business, Amazon Web Services, that can increase the company’s overall profits. In its most recent quarter, Amazon said, profit fell 28% as it invested in one-day shipping initiatives.

Leading up to the holidays, Amazon is only getting more aggressive. It is expanding the items that it will ship free in a single day to Prime customers. According to a Morgan Stanley analysis, the typical order for one-day shipping is $8.32, and Amazon spends $10.59 to fulfill and ship it, meaning the company loses money on many sales. But Amazon may satisfy a more valuable goal: pressuring other retailers to deliver the same level of convenience to keep their customers.

Retail is a huge industry, and not every chain is being squeezed. Walmart and Target have evolved from big box stores into retailers that have succeeded at offering the same conveniences as Amazon like one-day delivery.

They have managed to thrive because they are helped by a wide range of products like food and household staples that customers have to buy on a regular basis. Their sheer size also allows them to pressure their suppliers to lower the cost of their goods, which frees up money to invest in e-commerce.

Still, Amazon seems to have most of the advantages. The company is building out its own fleet of airplanes, delivery trucks and couriers, while other retailers must contend with rising rates to ship through FedEx and UPS.

While retailers are coming through with a “very, very competitive digital shopping experience,” said Kimberly Greenberger, a retail analyst at Morgan Stanley, they are pouring money into their e-commerce operations at the same time their stores are bringing in fewer sales. Just when they seem caught up, Amazon raises the bar again.

“It just continues this vicious cycle that retailers find themselves in,” Greenberger said.

Tweets by @forbes_india
Explain career gaps and transitions on your resume
Comic: Welcome to the Maha-circus