Nazis used a red triangle to classify political prisoners during World War II. The Trump campaign said the red triangle in its Facebook ads was associated with antifa, a claim experts rejected 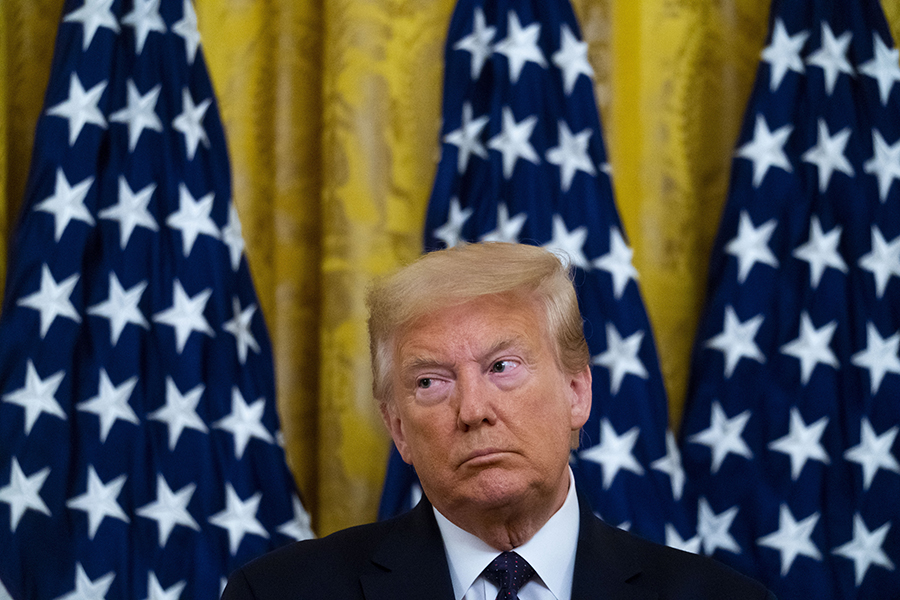 WASHINGTON — Facebook on Thursday removed advertisements posted on its platform by the Trump campaign that prominently featured a symbol used by Nazis to classify political prisoners in concentration camps during World War II, saying the imagery violated company policy.

The Trump campaign had used the ads, with a picture of a large red triangle, to inveigh against antifa, a loose collective of anti-fascist protesters that President Donald Trump has blamed for stirring violence and vandalism during the nationwide protests against racial injustice. There is scant evidence that antifa has been involved in any coordinated campaigns during the demonstrations.

“Dangerous MOBS of far-left groups are running through our streets and causing absolute mayhem,” the campaign’s Facebook ads said. Beneath the text was the red triangle, which Nazis used to identify communists and other political prisoners in camps, just as they used a pink triangle to identify people they labeled as homosexual.

It was not clear if the Trump campaign was familiar with the origin of the symbol, which was reclaimed after World War II by some anti-fascists in Britain and Germany, in the same way that various political groups over the years have reclaimed words and symbols used to oppress them.

“We removed these posts and ads for violating our policy against organized hate,” Facebook said in a statement. “Our policy prohibits using a banned hate group’s symbol to identify political prisoners without the context that condemns or discusses the symbol.”

Before their removal, however, the ads gained more than 1 million impressions across the Facebook pages of Trump and Vice President Mike Pence. They began running on Facebook on Wednesday and were flagged by a journalist for Fortune magazine on Thursday.

Tim Murtaugh, the Trump campaign’s communications director, defended the advertisements. “The red triangle is a common Antifa symbol used in an ad about Antifa,” he wrote in an email. “Pretty straightforward.”

He also said that a similar red triangle was a standard emoji, and provided links to merchandise for sale online, like water bottles and phone cases, decorated with symbols described by the sellers as “anti-fascist red triangles.”

Murtaugh noted that the red triangle was not listed in the database of hate symbols maintained by the Anti-Defamation League.

But the Anti-Defamation League said its database is not used to keep track of historical Nazi symbols, and only lists symbols commonly used by modern extremists and white supremacists in the United States. And the group denounced the Trump campaign for using the image.

“Whether aware of the history or meaning, for the Trump campaign to use a symbol — one which is practically identical to that used by the Nazi regime to classify political prisoners in concentration camps — to attack his opponents is offensive and deeply troubling,” said Jonathan Greenblatt, the chief executive of the Anti-Defamation League. “It is not difficult for one to criticize their political opponent without using Nazi-era imagery. We implore the Trump campaign to take greater caution and familiarize themselves with the historical context before doing so.”

The Auschwitz-Birkenau State Museum also weighed in on Twitter, noting that the red triangle was “the most common category of prisoners registered at the German Nazi #Auschwitz camp.”

Mark Bray, a historian at Rutgers and the author of “Antifa: The Anti-Fascist Handbook,” said that “the origin of the symbol is universally agreed to be with the Nazis and the concentration camps.” He added that the red triangle was not part of the symbolism of antifa in the United States.

The fact that the triangle has been reclaimed by some anti-fascists, Bray said, does not give the Trump campaign license to use the same symbol to attack antifa. “This is a symbol that represented the extermination of leftists,” he said. “It is a death threat against leftists. There’s no way around what that means historically.”

Facebook has removed Trump campaign ads in the past, for different reasons. In March, for instance, the company took down a number of posts that contained misleading information about the U.S. census, which violated Facebook’s rules.

But the company and its chief executive, Mark Zuckerberg, have also been adamant that Facebook will not police the veracity of political ads or posts by political leaders like Trump. That policy has received blowback internally from employees who staged a virtual “walkout” this month when the company did not take down some of Trump’s posts, which contained what many critics saw as incitements to violence and voter disenfranchisement.

Facebook’s policy stood in contrast to Twitter, which has added warning labels to some of Trump’s most incendiary tweets. Twitter has also stopped accepting political advertising, citing the potential for disinformation.

Trump and his campaign have often charged forward with little regard for the effect of hateful symbols, leaving critics with the impression that they are posting purposefully incendiary and racist content online.

In 2016, Trump tweeted and then deleted an image of Hillary Clinton’s face with $100 bills in the background and a six-pointed Star of David, the symbol that Nazis forced Jews to wear on their clothing. At the time, Trump defended himself by saying that the star was the shape of a sheriff’s badge.

Last week, the president postponed a planned campaign rally in Tulsa, Oklahoma, that had been scheduled for Friday, which is the holiday Juneteenth. He and his top aides did not realize the significance of holding the rally on a holiday that commemorates the end of slavery in America, in a city that was the site of one of the country’s most violent racist episodes.