Forbes to host $1 million 'Change the World' competitions for entrepreneurs 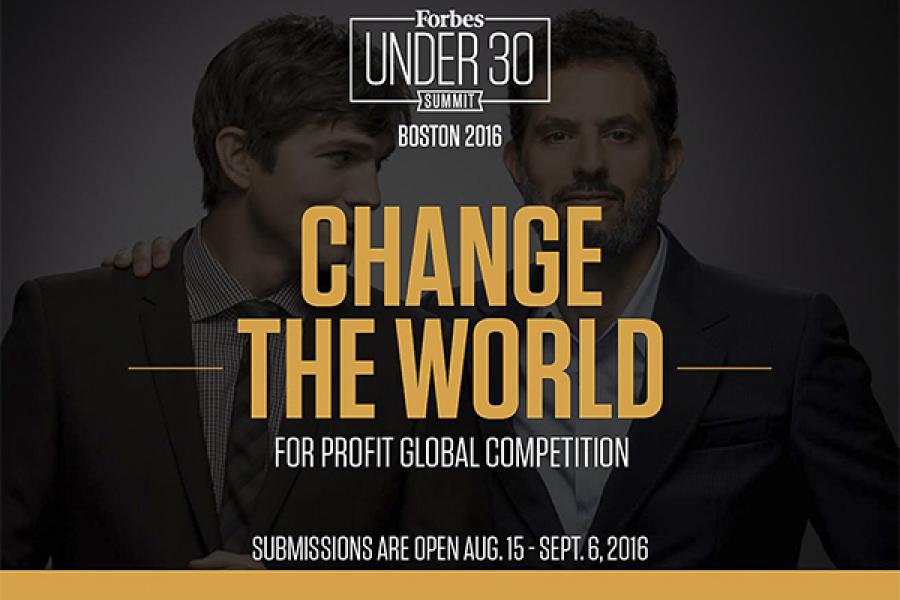 In one competition, Forbes is partnering with Ashton Kutcher and Guy Oseary, Co-Founders of Sound Ventures, as well as Boston-based Rough Draft Ventures (powered by General Catalyst)

Forbes will host two global 'Change the World' competitions for entrepreneurs under the age of 30 as part of its Forbes Under 30 Summit taking place in Boston later this year. The event scheduled October 16-19 2016, will see both, for profit and nonprofit competitions, Forbes announced on Monday.

In one competition, Forbes is partnering with Ashton Kutcher and Guy Oseary, Co-Founders of Sound Ventures, as well as Boston-based Rough Draft Ventures (powered by General Catalyst), to host a $500,000 global competition for early stage for profit entrepreneurs who have disruptive and scalable ideas with the potential to change the world.

"We launched Sound Ventures last March with a mission to seek out great ideas and back transformative companies at different stages of their growth” said Ashton Kutcher and Guy Oseary, co-Founders of Sound Ventures. “We’re proud to be a part of the Forbes Under 30 Summit and are very much looking forward to this competition as it gives us yet another avenue to find, fund and help young founders of disruptive tech startups.”

“We are psyched to celebrate the talent, innovation and ideas from the Forbes Under 30 Summit through a global Change The World competition,” said Peter Boyce, II, principal at General Catalyst and co-founder of Rough Draft Ventures. “Rough Draft Ventures, our student-led team dedicated to backing the best and brightest university entrepreneurs, together with Sound Ventures and Forbes, will provide founder with invaluable feedback and opportunity. I can’t think of a better combination to spearhead this competition.”

Forbes is also partnering with the Charles and Lynn Schusterman Family Foundation to host a $500,000 competition for US-based social entrepreneurs who are advancing solutions that will improve educational outcomes for PreK-12 students nationwide, with particular focus on low-income and urban communities.

“Our foundation is excited to partner with Forbes to identify and invest in young entrepreneurs seeking to create positive change in education and society,” said Stacy Schusterman, Co-Chair of the Schusterman Family Foundation. “We believe this generation of rising leaders has the potential to develop new models for tackling serious social and civic challenges.”

The Forbes Under 30 Summit is expected to convene more than 5,000 global entrepreneurs and game changers of all ages and will take place at different venues in Boston. The summit will comprise five themed interconnected stages. Each stage will feature panels, TED-style presentations, keynote speeches, live demos and fireside chats.  Two hundred speakers are expected to participate, including Ashton Kutcher, Jessica Alba, Deepak Chopra, Chrissy Teigen, Bobby Flay, Maria Sharapova, Adam Neumann, among many others.

Submissions for both the competitions will be accepted till September 6, 2016. To qualify for the competitions, one of the co-founders must be under the age of 30, that is, born after October 20, 1986.

To submit your entries for the two Forbes Change the World for profit and nonprofit competitions, click here.