The Italian brand is reducing its runway schedule. Your Instagram is about to change 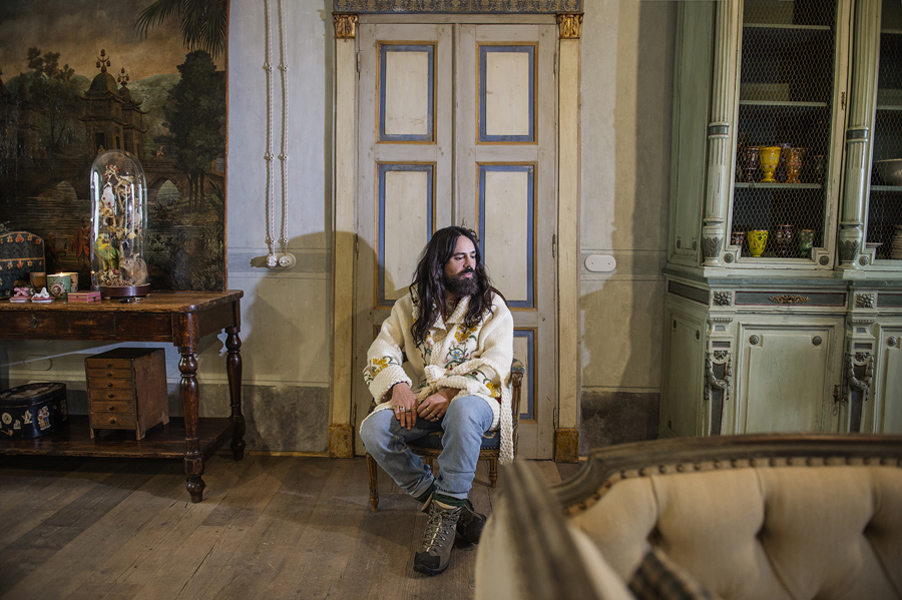 Alessandro Michele, the creative director of Gucci, in Porto San Giorgio, Italy, Dec. 8, 2019. Gucci has joined the chorus of brands and retailers calling for a permanent reset of the fashion system thanks to Covid-19, adding the weight of a giant global name to the movement. (Stephanie Gengotti/The New York Times)

Gucci wants to change show business. Or, rather, the business of shows. The Italian brand has joined the chorus of brands and retailers calling for a permanent reset of the fashion system thanks to COVID-19, adding the weight of a giant global name to the movement.

On Monday, Alessandro Michele, the creative director of Gucci, held a video news conference to announce that the brand will reduce the number of shows it holds each year from five to two, effectively abandoning the idea of cruise shows — the far-flung midseason extravaganzas it has held at a Roman Necropolis in Arles and the Capitoline Museum in Rome (among other places). He also wants to do away with the distinction between menswear and womenswear, and the traditional appellations of fall/winter and spring/summer.

“We need new oxygen to allow this complex system to be reborn,” Michele said, speaking from his studio in Rome while pensively waving a large black fan.

One way to do that, he said, is to reduce the show schedule.

Gucci is not the first brand to announce a change in its runway plans thanks to the coronavirus pandemic, which has brought the industry to an effective standstill, closing stores and decimating balance sheets. Saint Laurent, also owned by Kering, the Gucci parent company, said it will drop out of the fashion show season and follow its own schedule for this year; Dries Van Noten said he will not have a show at all until 2021; and Giorgio Armani announced that his men’s and women’s shows will be combined in September, and his couture show will be held in January in Milan instead of Paris.

But Gucci is the first brand to commit to a permanent rethink.

Ultimately, it may force a reckoning with the feasibility of the entire ready-to-wear show season: the four-week traveling circus that moves from New York to London to Milan to Paris every September-October and February-March.

“I will abandon the worn-out ritual of seasonalities and shows to regain a new cadence, closer to my expressive call,” Michele wrote in his diary, excerpts from which, entitled “Notes from the Silence,” were teased on Gucci’s Instagram account.

The designer said it was while he was in lockdown in his apartment in Rome that he had “time — time I have never had before to think about my work, my creativity, our future, the future of the company.” He felt, he said, that under the previous unrelenting system, his “creativity was being jeopardized.”

After speaking with Marco Bizzarri, the Gucci chief executive, the decision was made to reduce the show schedule, although when the first of the new “appointments,” as he referred to the shows, will take place was unclear.

Michele said he believed that showing this coming September would be impossible, but on July 17, during Milan’s digital fashion week, Gucci will broadcast a look at what would have been its cruise collection (called “Epilogue,” it may be the last of its kind). He said he believed that ultimately spring and fall were the correct times for the shows, with the exact dates were to be determined.

Michele also said he was not sure what form, digital or physical, the shows would take, although he favored using the terminology of classical music as a reference: symphonies, madrigals, nocturnes, overtures. He added that while he was speaking with other brands — “I’m no anarchist” — and the Camera Nazionale della Moda, the governing body of Milan Fashion Week, the conversations were ongoing.

All of which suggests that fragmentation of the entire fashion show experience is increasingly possible.

Maybe it is time: The cost, personal and professional, of spending 2 1/2 months a year, if not longer, in the alternate universe of fashion shows, has been growing, and designers, retailers and editors have been chafing under the strain, lamenting the lack of space to really consider, create and produce meaningful work. Not to mention the carbon emissions involved. Fewer fashion weeks are unquestionably more sustainable, both in terms of human and environmental price.

Yet at issue is not just the point of a show, which in recent years has become more of a marketing event made to be read on the small screen than an unveiling of a new idea about how clothes are constructed to express identity, but also an enormous source of income for the municipalities involved.

In 2019, Rep. Carolyn Maloney of New York released a report from the New York City Economic Development Corp. noting that New York Fashion Week was responsible for generating close to $600 million a year in income, thanks in part to all the associated industries, including hotels and restaurants, security services and florists — representing a greater economic impact than the Super Bowl or the U.S. Open tennis tournament.

The same is true for the other fashion week cities. If the show schedule falls apart, cities that are already challenged by the pandemic will feel the impact.

That is not a reason not to change, but it is also not an immaterial side effect of such change. No brand is an island, nor any industry system. As the conversation around what is next for fashion steamrollers on, that is worth remembering.

Tweets by @forbesindia
Inside Marico's pandemic plan
PHOTOS: All the world's a masquerade