IT giant's shares go up by 11 percent 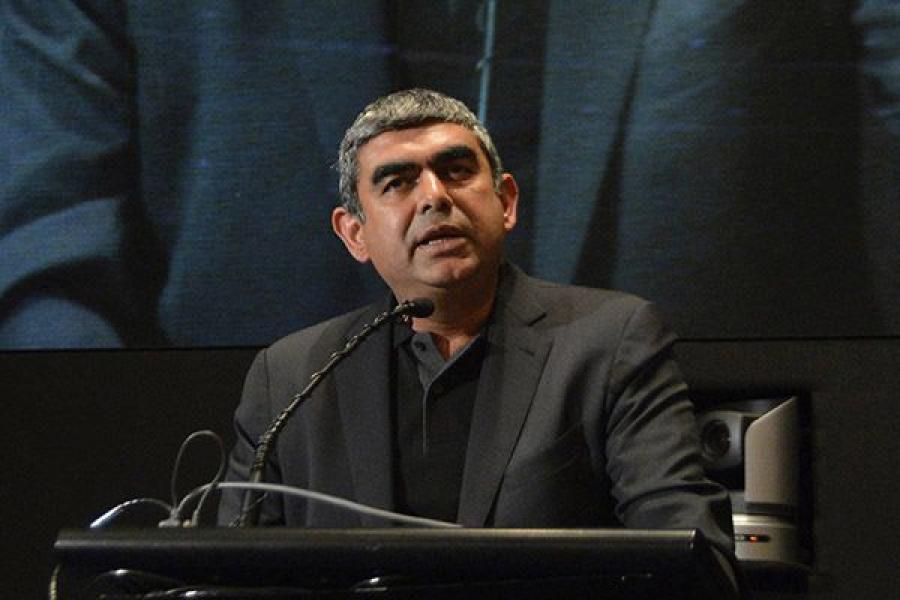 The first quarter of the current fiscal started on a promising note for India's second-largest IT firm Infosys Ltd. The Bengaluru-based company on Tuesday cheered the markets by posting a 4.5 percent sequential dollar-revenue growth, the highest in 15 quarters, sending the company's shares soaring by 11 percent. The announcement comes at a time when the IT firm's first non-founder CEO and managing director Vishal Sikka is scripting a recovery story of Infosys, which has lost its bellwether status over the last few years, and is now lagging behind peers.

After several quarters of sluggish growth, Infosys's June-quarter earnings, which are ahead of Street expectations, have set the right track for the company to achieve its full-year (FY16) revenue guidance of 10-12 percent growth over the previous fiscal in constant currency terms. Typically for companies with large foreign operations, constant currency growth is seen as an indicator of real growth. IT firms use this method to eliminate the effects of exchange rate fluctuations while calculating financial results.
During the April-June stretch, Infosys recorded revenues of $2.25 billion, up by 4.5 percent quarter-on-quarter, outperforming larger rival TCS's revenue growth of 3.5 percent during the same period. Analysts were expecting Infosys to post sequential dollar-revenue growth in the range of 2.6-3.5 percent for the first quarter of the current fiscal.
Mumbai-headquartered TCS posted business volume growth of 4.8 percent during the June quarter compared to Infosys's 5.4 percent, the highest in 19 quarters.
"We had a great quarter. We had the best revenue growth in the last 15 quarters and best volume growth in the last 19 quarters. I believe this is a result of the initiatives we have taken, given the organisational realignment that we made in delivery, sales and consulting services. All these initiatives have resulted in the success we have seen in large deal wins. This quarter saw the results of our deep operational focus as well as the widespread adoption of innovation and new technologies that are starting to show results now. Our performance has set a good momentum for rest of the year," said Sikka, CEO and managing director of Infosys.
During the April-June period, Infosys had a gross client addition of 79, including six large deals with a total contract value of $688 million.
"We are confident of achieving our guidance of 10-12 percent in constant currency for FY16. However, we are still early in achieving our target of becoming a next-generation services company. This quarter gives us reason to be confident," Sikka added.
According to a report by Hong Kong-based brokerage firm CLSA, Infosys reported "very strong numbers, client additions and deal wins”. The report added: "Strong growth across verticals and service lines indicate a business in full-fledged recovery."
The IT-services exporter raised its FY16 dollar revenue growth outlook to 7.2-9.2 percent from its earlier forecast of 6.2-8.2 percent.
In rupee terms, Infosys recorded a net profit of Rs 3,030 crore during the June quarter, down by 2.1 percent quarter-on-quarter. Revenue was up by 7 percent sequentially at Rs 14,354 crore during the April-June period. In dollar terms too, profit declined by 4.5 percent at $476 million. Operating margin during the June quarter declined nearly 2 percent to 23.9 percent from 25.7 percent in the previous quarter.
"Employee engagements, promotions, wage hikes and cross-currency volatility have impacted our operating margin. While we had $23 million exchange gain in the March quarter, we lost $3 million in the first (June) quarter due to the rupee depreciating against all major global currencies," said Rajiv Bansal, chief financial officer, Infosys.
The IT-services major announced an average wage hike of 6.5 percent for its employees effective from April, while top performers were given a 9 percent hike. For its workforce abroad, the hike was 2 percent, the company said.
Dipen Shah, head of Private Client Group Research, Kotak Securities, pointed out that Infosys has achieved significant progress in its quest of ‘New and Renew’ with extensive training of employees and implementation of projects in emerging areas, including design thinking, artificial intelligence and automation. "On the other hand, the reorganisation of the client-facing initiatives is leading to deeper penetration among large clients while increasing the client count as well. These investments should help Infosys sustain and improve growth rates in the future while sustaining margins. We maintain our positive stance on Infosys," Shah said.
Infosys said that during the June quarter, it has invested about $1.4 million in Bengaluru-based ANSR Consulting, a strategy consulting and implementation firm from its recently formed ‘Innovate in India Fund’. For Infosys, it would be the first investment in any Indian startup.
The IT-services firm created an 'Innovate in India Fund’ from its $500 million Innovation Fund. The $250 million Innovate in India Fund is dedicated to investments in promising new Indian startups. Infosys has also set aside $10 million from the global Innovation Fund for Ireland-based startups.
Ever since Sikka took over as the CEO of Infosys in August 2014, he has been focusing on newer technologies such as big data, analytics and mobility. In October last year, Sikka charted out a new plan for the company to revive growth led by innovation across all its services, including automation and artificial intelligence. In an export-heavy and highly commoditised Indian IT industry where companies clone each other’s offerings, Sikka is looking to create a differentiating model for the IT-services firm.
Net addition of employees during the quarter stood at 3,336. The company had 1,79,523 employees as of June 30. Attrition rate during the April-June quarter stood at 14.2 percent compared to 23.4 percent a year ago.
Shares of Infosys closed at Rs 1119.05, up by 11.69 percent, on the Bombay Stock Exchange on Tuesday.