Is the initial euphoria over reduction in oil prices set to end?

India's wish for a moderation in oil prices has been more than granted, which hasn't proven to be the panacea that it hoped for 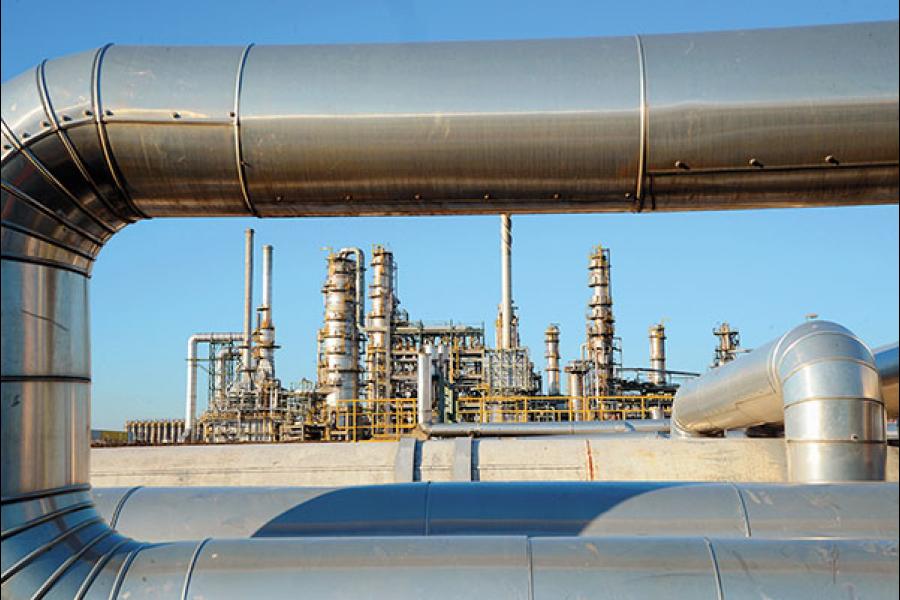 Prince Al-waleed bin Talal (officially the richest Saudi and a member of the ruling family) has gone on record to say, “We will not see $100-a-barrel oil again.”  Recent weakness (an understatement, no doubt) in crude oil notwithstanding, this is still a very powerful statement. Let’s look at some of the causes, effects, risks and why this may just be true.

Reduction in oil prices invariably affects the entire global ecosystem – producers, consumers, oil economies etc. While Talal’s statement is a bit jarring, considering his position and control over oil markets, there is still room for oil prices to shoot up and normalise in the near future, given the range of issues global economies face and emergence of Shale gas as replacement to oil. Here’s a brief overview: 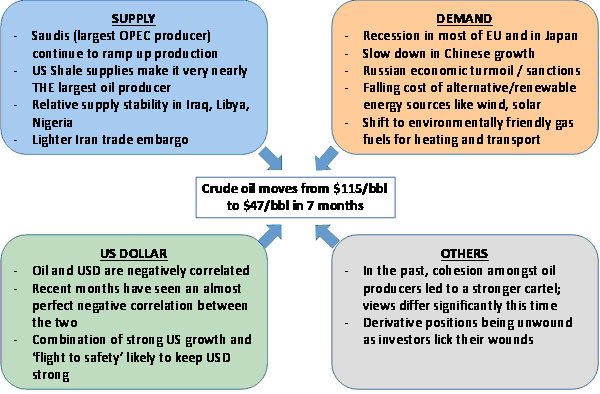 Myriad causes
Gloomy predictions about low global economic growth (particularly in European Union, Japan and China) have doubtless contributed to the negative sentiment but as seen above, there are many other factors contributing to the current downtrend in oil prices:

Supplies: In 2014, the US pumped an equivalent of 11 million barrels a day of both crude oil and natural gas combined, making it the largest producer in the world. Much of this supply did not exist till barely a couple of years back. Besides this, an easing geo-political situation across Africa and the Middle East is also leading to stable supplies.

Substitution: The fracking revolution in the US has led to an increase in supplies and usage of natural gas, which is a cleaner burning fuel than oil. Besides this, some nations, such as Japan, are actively substituting oil for natural gas and alternative fuel sources. China and India too are looking towards growing natural gas to resolve their smog issues. The low cost of natural gas compared to crude oil even at these levels represents a major arbitrage opportunity through substitution. 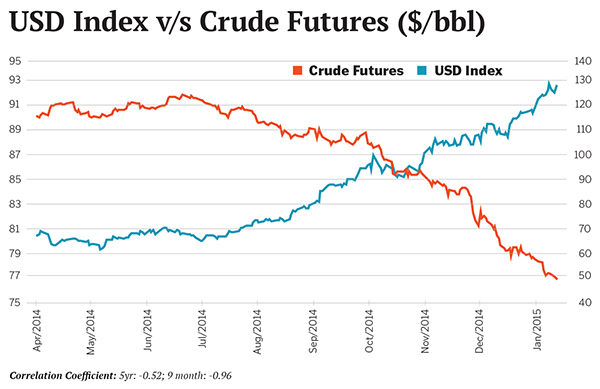 Analysis based on data sourced from investing.com

USD strength: USD and crude oil have traditionally been negatively correlated. However, not only has the movement in the USD been much stronger in the last 6-9 months, even the correlation has been almost perfectly negative.

A stronger dollar is also indicative of underlying strength in the US economy and to the extent that falling oil prices boost consumer power in the US, a feedback loop could be occurring. 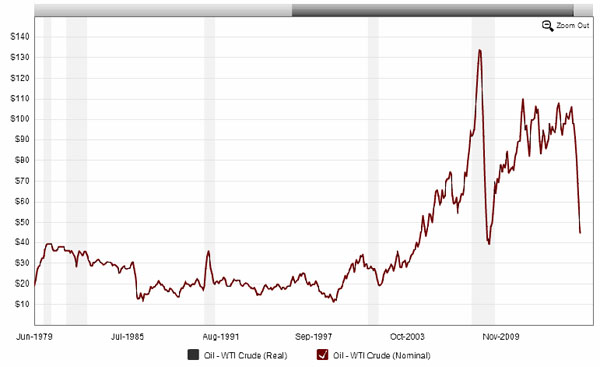 Where could prices settle?
Besides the fact that Prince Alwaleed would know a thing or two about the future of crude oil prices, history too supports the view that the new top for oil prices (as and when it occurs) could be well short of $100/bbl.

Post the oil crisis of the 70s, prices were relatively stable for an extended period, reaching a post-dot com bust low of ~$19/bbl.

It took the longest economic boom in history to take the prices from there to $130+/bbl levels in mid-2008 (over 7 years) only for the price to crash to $40/bbl levels in January 2009 post the financial crisis. Sustained liquidity infusions through QE, economic stimulus packages in China and building derivative trades then took the prices above $100/bbl levels in a short span of 2 years.

Needless to say, neither are we on the cusp of a boom such as that between 2001 and 2008 nor are we likely to see the kind of easy liquidity conditions in a hurry. Besides, financial institutions do not have the kind of risk appetite or balance sheets to create a similar bull market in crude oil.

What does it mean for India?
The initial euphoria in India over falling oil prices has waned. Lately, a growing realisation has crept in that the low prices are indicative of a deeper economic malaise in most parts of the world and that this cannot bode well for global growth.  Though, the benefit of reduction in crude oil prices has been passed on to the consumers with reduction in petrol / diesel prices by the NDA government, the general masses have realised that the staggering fall in prices may be indicative of a coming economic downturn. The gains though have been tangible, all around, for now:

Gains for the consumer:
Much of the gains haven’t yet flowed on an individual level (or at the pump level, if you will):

The portion of gains not passed on to the end user have been distributed between the Central Government (excise duty hikes – more on that follows), State Governments (hike in local VAT and other taxes) with the balance going to Oil Marketing Companies (OMCs) like BPCL, HPCL and Indian Oil as margins.

Yet, for an average user of say 80-90 litres a month, this gives a not-so-modest nearly Rs20,000 p.a. of gains, which can find its way into financial savings, consumer spending or (hopefully not) more gold buying.

One of the reasons for this disproportionate decline in pump prices has been the consistent hikes in excise duties by the Central government; total impact has been Rs7.75 / litre so far on petrol and Rs6.5/ litre on diesel (both absorbed by the OMCs, who in turn have not been reducing prices for consumers in their fortnightly reviews, effectively negating the absorption).

This will bring in an additional Rs60-70 billion for the Government in the next 3 months, which has already blown 99% of its planned expenditure in the first 9 months of the current fiscal. There is also talk of a VAT increase by States. Lower subsidy pay-outs (kerosene, LPG, etc.) will also help reduce this deficit.

On the Balance of payments / trade deficit front, the gains are obviously tangible given that oil was 36% of the import bill, which has now fallen to ~26% at current prices (demand has been more or less constant). However, the euphoria needs to be moderated by the lower realisations on exported refined petroleum products, which are ~20% of total exports.

The BPCL stock for instance, has doubled in the past 1 year versus a 32% gain for the Nifty. Political and consumer pressure may however force price reductions in a big way in the near future since the government won the elections largely on a promise of improving the individuals’ economic prospects.

Second order cost effect is expected to be substantial for the following:

Gains however are likely to reflect in the results of corporates only post Q4 FY’15 due to inventory effects and the fact that the steepest declines have come around only towards the end of 2014 – to the extent that companies have already started to benefit from lower input costs and have not passed on the benefit to consumers, margins will start improving from Q3/Q4 FY15.

Stock prices seem to have already priced in most of these gains in the November 2014 and January 2015 rallies.
Downside risks for the global & Indian economy:

The champagne prudently remains uncorked as a number of specific downside risks remain to play out, which are contingent upon crude oil remaining below $50/bbl for an extended period of time:


Outlook:
While, some of the reasons surrounding the drop in oil prices are not cause for cheer, it may be useful to look at all the factors (USD’s movement, supply scenario, geo-political factors) – together these, in my opinion, outweigh the gloom around low demand. Some cheer may be in store for countries such as India, which are dependent on imported oil and are driven to a large extent by domestic consumption and investment.

A recent Oxford Economics study predicts a 0.75% GDP uptick for India from a $40/bbl price level (Philippines is at 2%; Saudi Arabia at -4%). At the same time, fact remains that lasting GDP growth comes from increase in demand and investment, not from reduction in costs. Until consumer demand and investment activity do not grow significantly, gains from reducing oil prices may be just a drop in the barrel.

The other item on the wish list: interest rate cuts, is also being granted and may be similarly over-rated? Time will tell whether all is well or all is in the well.