Every day since the movie's release in early October, dozens, sometimes hundreds, of visitors have traveled to the staircase Hurvitz found to visit and take selfies on the same steps Joaquin Phoenix's character hikes up, and later descends in one of the movie's memorable scenes as he celebrates his transformation into the Joker 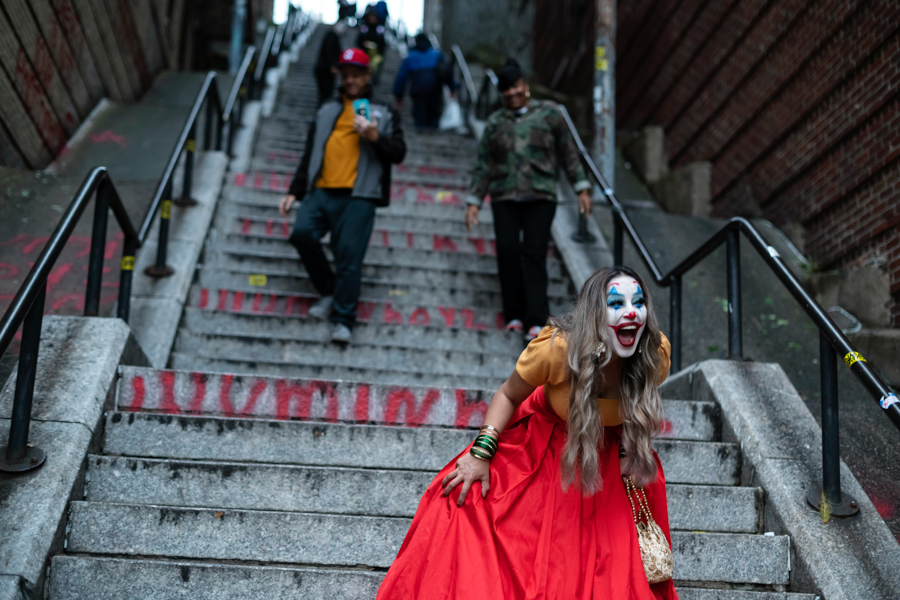 Rami Mahal, a makeup artist from San Jose, Calif., visits the staircase made famous by “Joker,” in the Bronx, Oct. 30, 2019. Almost every day since the movie’s release, dozens, sometimes hundreds, of visitors have traveled to the staircase for selfies and dancing. To the residents of the Highbridge neighborhood, it’s been amusing, and irritating. (Karsten Moran/The New York Times)

He was interested in one that had appeared in the film “American Gangster,” a long set of steps that would convey the hopeless, 1980s urban feel he wanted for his new movie, “Joker.” The movie’s protagonist, Arthur Fleck, would trudge up them on his way home from work.

So a location scout, Aaron Hurvitz, 41, did his research and tracked down the “American Gangster” stairs in a South Bronx neighborhood.

But when he got there, he found the steps weren’t quite right. New York wasn’t Gotham City anymore.

So, he drove around looking at various staircases, sometimes called “step streets,” that Bronx residents use to get from higher-altitude roads and sidewalks to lower ones. The right staircase would be a little bit dramatic but also unmistakably gritty, the kind that no one would confuse with a tourist destination.

That is how a humble staircase rising up from Shakespeare and Jerome avenues became the city’s newest tourist destination.

Almost every day since the movie’s release in early October, dozens, sometimes hundreds, of visitors have traveled to the staircase Hurvitz found to visit and take selfies on the same steps Joaquin Phoenix’s character hikes up, and later descends in one of the movie’s memorable scenes as he celebrates his transformation into the Joker.

By Wednesday, Instagram had more than 2,000 posts associated with “#JokerStairs,” many of those photos of people prancing on the steps in Joker attire and makeup, mimicking Phoenix’s extravagant dance moves. There are so many posts that it’s getting hard to tell them apart, but fans are trying to make their shots stand out: In one Instagram video, two Jokers played table tennis on a landing.

Even on a weekday afternoon, with a constant drizzle making the 132 steps slick and a bit precarious, a steady stream of visitors took turns this week posing and playing photographer.

A young woman wearing a Joker-esque red jacket and black shorts improvised some jazzy dance moves for a video camera. She paused to empty some water from a bottle onto her head for effect, then she kicked and twirled and gyrated as the cameraman followed her.

A group of tourists from Moscow sang romantic Russian songs with guitar accompaniment partway up the stairs. (“Our friend told us this was an atmospheric place,” one musician said.)

In less than a month since the film’s release, the Bronx site has joined a list of iconic stairs from movies and television. Its company includes the “Exorcist” stairs in the Georgetown neighborhood of Washington; the Rocky Steps at the Philadelphia Museum of Art; and the “Law & Order” stairs at the state Supreme Court in Manhattan, which the show’s attorneys often climb.

To the people who live in the Highbridge neighborhood and see the steps as simply the quickest way to get up the steep hill from the 4 train stop, it has all been a little amusing and occasionally irritating.

“Excuse me!” said a woman wearing a backpack as she pushed through a gaggle of tourists crowding the bottom of the stairs.

Habib Thiam, 48, a chef who lives on the fifth floor of an apartment building overlooking the staircase, said he remembers peering out of his bathroom window to see a film crew and Phoenix as the Joker. Now, while he brushes his teeth, he can watch Joker wannabes and Instagram influencers in the same spot.

Frankie Rivera, who has lived there for about 30 years, watched the loose crowd of picture-takers and performers from across the street, where a deli, tax preparation service and beauty salon were relatively isolated from the frenzy.

When Rivera ran marathons, he said, he trained by running up the 7-1/2-foot-wide steps, which come in groups of 12 before leveling out into a landing. “Those were my stairs — that was my exercise,” he said. “I used to go up and down, up and down, 25 times.”

The step street is one of dozens in the city, primarily in the jagged terrain of upper Manhattan and the Bronx, that were created for pedestrian use because they were deemed too steep for cars. In theory, anyway: Rivera, who does maintenance work and lives just across the street, said about a year and a half ago, someone drove a car from top to bottom.

“I thought that was going to make the stairs famous,” Rivera said. “But nobody said nothing about it.”

There have been upsides to all the attention. A few months ago, Rivera said, the stairs had been littered with garbage. So much so that he felt that some walked around the block to avoid it. “Containers of milk, all kinds of garbage — house garbage,” he said. Now, Rivera said, he’s noticed they’ve been much cleaner.

In fact, about a block south, on Jerome Avenue, there’s another staircase largely identical to the now-famous one. It was littered with items including an orange juice carton, a Goldfish bag, a dog food can and a blue Anthora coffee cup. (Asked about the relative cleanliness of the staircases, a spokeswoman from the city’s Department of Sanitation said that some step streets may be cleaned more often because of heavier pedestrian traffic.)

Despite some sentiments, expressed in the Instagram comments sections, that the neighborhood was being invaded by interlopers, most residents did not seem too perturbed. Walking by the scene, some chuckled, then pulled out their phones to take pictures of the tourists taking pictures.

Jhonathan Valencia and Dangelyn Vargas, two 25-year-old actors who both live nearby, stopped at the base of the steps to take in the scene of chattering tourists. They liked that travelers were flocking to the neighborhood where they grew up.

“You know how people say the Bronx is a bad area?” Valencia said. “Now people from all over the world are coming here to look at the stairs, the famous stairs!”

Vargas said it was strange to see tourists as far north as West 167th Street, which connects to the top of the staircase: “Before, they would never go past 161, which is Yankee Stadium. At 167 and Shakespeare? That’s unheard of.”