Life on Venus: When are we going back?

Astronomers on Monday reported the detection of a chemical in the acidic Venusian clouds, phosphine, which may be a possible sign of life. Venus is not easy to visit, but that hasn't stopped space programmes from trying 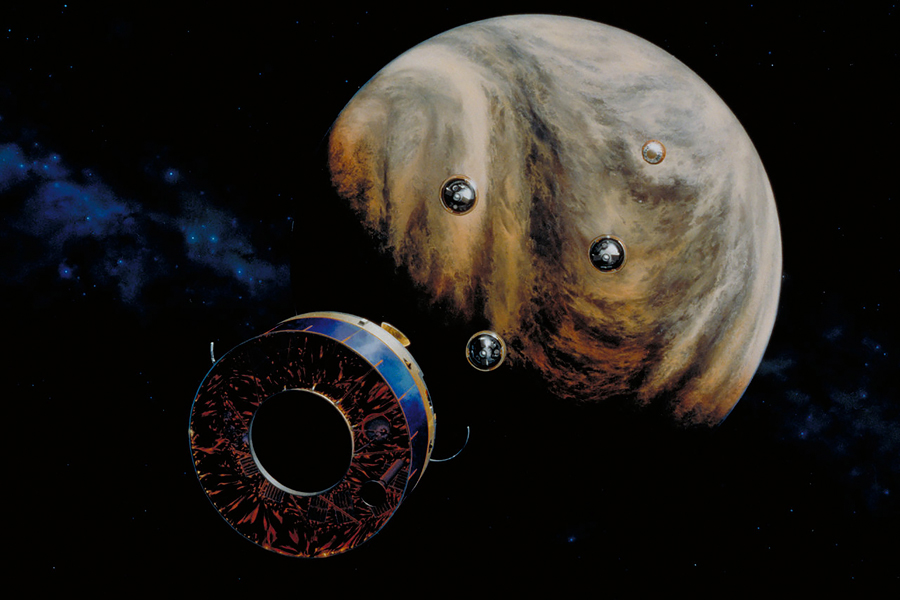 In an undated image from Paul Hudson/NASA, an artist's rendering of NASA's Pioneer Venus 2 spacecraft and four atmospheric probes, for a 1978 mission to learn more about the planet's atmosphere. Much visited in an earlier era of space exploration, the planet has been overlooked in recent decades. (Paul Hudson/NASA via The New York Times)

Carl Sagan once said that Venus is the planet in our solar system most like hell. So when are we going back?

Astronomers on Monday reported the detection of a chemical in the acidic Venusian clouds, phosphine, which may be a possible sign of life. That has some planetary scientists itching to return to the sun’s second planet, especially those who feel Venus has long been overlooked in favor of Mars and other destinations.

“If this planet is active and is producing phosphine, and there is something that’s making it in the Venus atmosphere, then by God almighty, forget this Mars nonsense,” said Paul Byrne, a planetary scientist at North Carolina State University. “We need a lander, an orbiter, we need a program.”

Venus is not easy to visit. Its carbon-dioxide-rich atmosphere is 90 times as dense as ours, and surface temperatures average 800 degrees Fahrenheit. Its surface pressure is intense enough to crush some submarines.

But that hasn’t stopped human space programs from trying. About 40 robotic spacecraft launched by governments on Earth have tried to visit Venus in one way or another. Here are highlights from past journeys to Venus, as well as the prospects for a speedy return to the planet to find out what’s going on in those clouds.

The Many Soviet Visitors to Venus
In 1961, the Soviet space program began trying to explore Venus. In the decades that followed, it shot dozens of spacecraft toward the world sometimes known as Earth’s twin. While Soviet exploration of Venus started with many misfires, the country became the first to land a spacecraft on another world, and not long after, the first to take photos from the surface of another planet. Their engineering achievements were significant even by modern standards.

After seeing their first round of spacecraft sent into the atmosphere squashed like tin cans, the Soviets realized just how extreme the pressure on Venus was. This trial and error led to the construction of a 5-ton metal spacecraft built to withstand, even if for just an hour, the immense surface pressures.

Venera 4 in 1967 became the first spacecraft to measure the atmosphere of another planet, detecting large amounts of carbon dioxide that cause the ceaseless Venusian greenhouse effect.

Then in 1975, the country’s Venera 9 probe became the first to take images from the surface of another planet. The world officially met Venus. The images it and later missions sent back revealed a planet that was truly like no other: cracked terrain beneath hazy, diluted neon green light. The planet we thought might have been covered in oceans and akin to our own was instead an alien world with poison rain.

Later missions in the Venera series into the 1980s gave scientists a better understanding of the planet’s geological processes. Venera 11 and 12 both detected large amounts of lightning and thunder as they traveled to the surface. Venera 13 and 14 were both equipped with microphones that documented the sounds of their descent to the surface, making them the first spacecraft to record audio from another planet.

In 1985 the Soviet Union concluded its Venus encounters with the twin Vega spacecraft, which each released large balloons loaded with scientific instruments, demonstrating the potential for probes that could float in the planet’s clouds.

The slowed pace of the Soviet space program toward the end of the Cold War halted launches to Venus. While the Russian space program has discussed future exploration of Venus, its concepts have not moved off the drawing board.

NASA Kept Its Sights on Venus, too
While Mars has always seemed like the apple of the eyes of American space planners, the Mariner and Pioneer programs of the 1960s and ’70s made time for Venus.

Mariner 2 was the first American spacecraft to make it to Venus, in 1962. It determined that temperatures were cooler higher in the clouds, but extremely hot on the surface.

In 1978, the Pioneer missions gave American researchers a closer look. The first of the pair orbited the planet for nearly 14 years, revealing much about the mysterious Venusian atmosphere. It also observed the surface was smoother than Earth’s, and that Venus had very little or perhaps no magnetic field. A second Pioneer mission sent a number of probes into Venus’ atmosphere, returning information on the structure of the clouds and radar readings of the surface.

NASA’s Magellan entered into orbit in 1990 and spent four years mapping the surface and looking for evidence of plate tectonics. It discovered that nearly 85% of the surface was covered in old lava flows, hinting at significant past and possible present volcanic activity.

It was also the last of the American visitors, although a number of NASA spacecraft have used Venus as a slingshot as they set course for other destinations.

Other Visitors to Venus
Venus Express was launched by the European Space Agency in 2005. It orbited the planet for eight years and observed that it still may have been geologically active.

The planet’s only guest from Earth right now is Akatsuki, which was launched by Japan in 2010. The probe missed its meeting with Venus when its engine failed to fire as it headed into orbit. By 2015, the mission’s managers had managed to steer it on a course to orbit and study the planet.

It has since transformed how scientists view our clouded twin. In its study of the physics of the dense cloud layers of Venus, the mission has revealed disturbances in the planet’s winds known as gravity waves, as well as equatorial jet streams in its atmosphere.

Who’s Next?
Many missions back to Venus have been proposed, and some space agencies have declared ambitions of visiting the planet. But it’s hard to say whether any will make the trip.

India’s space agency has proposed a mission called Shukrayaan-1, which will orbit the planet and primarily focus on the chemistry of the atmosphere.

Peter Beck, the founder of Rocket Lab, a private company started in New Zealand that has launched about a dozen rockets to space, has recently spoken of sending a small satellite to the planet.

NASA has considered a number of Venus proposals in the past decade, including two in 2017 that were finalists of NASA’s Discovery program, which has previously sent explorers to the moon, Mars, Mercury and other destinations. But the agency instead selected a pair of asteroid missions.

Also in 2017, for the larger, more expensive New Frontiers competition, NASA considered a Venus mission called Venus In situ Composition Investigations, or VICI, which sought to put two landers on the planet’s surface. It was passed over for Dragonfly, which will send a plutonium-powered drone to fly on Titan, the largest moon of Saturn.

NASA, however, did provide money for some of the technologies that VICI would need. And Venus proponents may have a new advocate inside NASA. Lori S. Glaze, the principal investigator of VICI, is now the planetary science division director at NASA.

The agency will have another chance to pick a Venus mission for funding in the next round of its Discovery program.

Two Venus spacecraft, named DAVINCI+ and VERITAS, are competing against proposed missions to Neptune’s moon Triton or Jupiter’s volcanic moon Io. NASA may select two of the four finalists. And there could be other possibilities for visitors to Venus.

“We should also recognize that Venus is a planetary destination we can reach with smaller missions as well,” said Thomas Zurbuchen, the head of NASA’s science mission directorate.