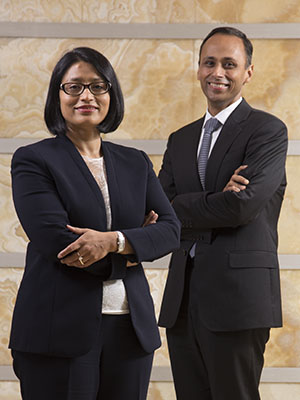 Image: Joshua Navalkar
Vinita Gupta, CEO of Lupin, with brother Nilesh, who is MD of the company

Lupin, India’s third largest pharmaceutical company by sales, recorded a sharp year-on-year decline in net profit for the quarter ended September 30, 2015, primarily due to a slowdown in the pace of new launches in the lucrative US generic drugs market.

The pharma company reported a 35.1 percent year-on-year decline in consolidated net profit for the September quarter to Rs 409 crore. The decline in profitability was mainly caused by only a marginal increase in revenues over the period, offset by higher costs. Lupin reported net sales of Rs 3,178.30 crore, up two percent over the year earlier. In the same period, key costs such as the company’s employee and manufacturing expenses rose around 19 percent year-on-year each, as a result of which operating profit margin fell from 26.7 percent in the September 2014 quarter to 21.1 percent in the September 2015 quarter.

“Slowdown in approvals in the US and a lack of material launches continued to dampen growth,” Lupin’s managing director Nilesh Gupta said in an earnings statement issued on Tuesday. “We continue to invest in research and remain upbeat on the pace of approvals and launches to pick up by the fourth (January-March 2016) quarter.”

Lupin’s research and development expenditure stood at Rs 388 crore during the second quarter of fiscal 2016, up around 36 percent over last year.

The company’s poor financial performance in the quarter led to a fall in its stock price on Tuesday. Lupin’s share price on the BSE fell 5.25 percent to close at Rs 1,945.65 per share. The bourse’s benchmark Sensex lost 0.40 percent to end at 27,253.44 points.

The Mumbai-based company that was founded by Desh Bandhu Gupta, a former professor at the Birla Institute of Technology and Science, Pilani, in 1968, has been struggling with a slower pace of new launches in the US market for a few quarters now. One of the main reasons for this has been a delay on the part of the US Food and Drug Administration (USFDA) in granting approvals for the entry of new generic drugs into the market.

Sales in the US, Lupin’s largest market with a 36.4 percent share of overall net sales, fell 9.2 percent year-on-year in the July-September period to Rs 1,155 crore.

To partially mitigate this challenge, Lupin acquired US-based generic drug maker Gavis in July 2015 for $880 million, the biggest foreign acquisition by an Indian pharma company to date. In an interview with Forbes India in July 2015, Vinita Gupta, Lupin’s US-based chief executive officer, had said the Gavis acquisition would help Lupin expand its pipeline of new drugs in the US market. After the Gavis acquisition, the total number of Abbreviated New Drug Applications (ANDA) that Lupin has pending with the US regulator rises to 164 (with an addressable market size of $63.8 billion), the fifth largest ANDA pipeline for all pharma companies operating in the US.

Vinita had said the Gavis acquisition was expected to be complete by the December 2015 quarter, which lends reason to Nilesh’s statement on Tuesday where he has expressed confidence of an uptick in business from the January-March quarter onwards.

Lupin hopes to achieve a turnover of $5 billion by fiscal 2018 and its management, led by Vinita and Nilesh Gupta, expect a large part of this incremental turnover to come from inorganic growth. Consequently, the company has been on an acquisition spree, snapping up as many as 12 companies since 2007; six of them in the last one-and-a-half years alone. The company closed FY15 with a turnover of Rs 12,600 crore and a net profit of Rs 2,403 crore.