Oil giants mount a defense, under fire from climate activists

As world leaders gathered at the United Nations climate summit, 13 of the world's biggest fossil fuel companies presented their defense at a forum across town. But most of their proposals appeared designed to perpetuate the use of oil and gas for decades to come, rather than transition quickly to cleaner options 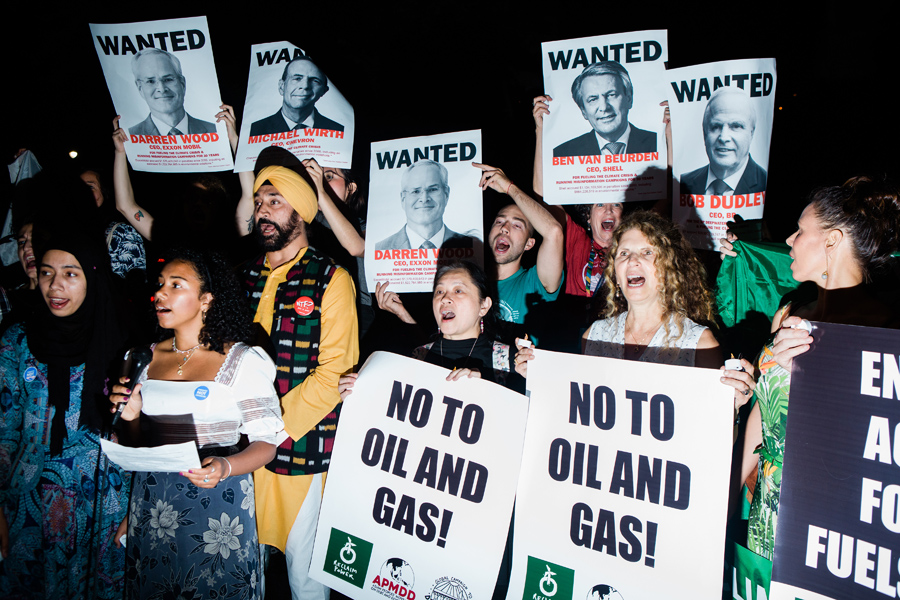 Demonstrators outside the Gramercy Park Hotel, where oil and gas executives were having a cocktail party, in New York, Sept. 22, 2019. On Sept. 23, as world leaders gathered at the United Nations climate summit and discussed the urgency of slashing carbon dioxide emissions from burning fossil fuels, 13 of the world’s biggest fossil fuel companies presented their defense at a forum across town. (Gabriela Bhaskar/The New York Times)

From the deck of a boat in New York harbor, the chief executive of Equinor squinted toward a stretch of sea where his oil company will soon build a giant wind farm. “We are doing all we can” to fight climate change, said the executive, Eldar Saetre.

Hours later, at a hotel where Saetre and fellow oil executives were gathering to defend their industry — a major contributor to global warming — climate protesters weren’t buying it. Using lights, they projected “MAKE BIG OIL PAY” on the facade.

On Monday, as world leaders gathered at the United Nations climate summit and discussed the urgency of slashing carbon dioxide emissions from burning fossil fuels, 13 of the world’s biggest fossil fuel companies presented their defense at a forum across town. But most of their proposals appeared designed to perpetuate the use of oil and gas for decades to come, rather than transition quickly to cleaner options.

The companies promised a program to invest in technologies to scrub carbon dioxide from the air, although big questions remain about scaling up that technology. They also promised to cut down on leaks of methane, a potent greenhouse gas, from wells and pipes, and reaffirmed support of a tax on the burning of oil, gas and coal.

“The change that needs to take place — the trillions of dollars of investment — is only going to come from companies with resources and scale,” said Ben van Beurden, chief executive of Shell.

“This is certainly a first step. It’s a down payment. But this is a time we need a Hail Mary pass, not these modest steps,” said Andrew Logan, senior director for oil and gas at Ceres, which works with investors to address the impact of climate change on their holdings.

According to the United Nations, oil and gas production needs to fall by about 20% by 2030 and by almost 55% by 2050 to stop Earth’s temperature rising by more than 1.5 degrees Celsius above preindustrial levels. That is the target set by the 2015 Paris Accord, a landmark agreement among most of the world’s nations to fight global warming.

However, new data from the financial think tank Carbon Tracker indicates that, since 2018, major oil companies have invested at least $50 billion in fossil fuel projects — like Shell’s $13 billion liquefied natural gas project in Canada and BP, Chevron, Exxon Mobil and Equinor’s $4.3 billion deepwater oil project in Azerbaijan — that would not be financially viable if the world were to meet the 1.5-degree target.

With prices for renewable energy like wind and solar falling faster than even the most optimistic projections, the reasoning behind backing new oil and gas exploration has started to wear thin. “You can sense there was angst in the room,” said Jules Kortenhorst, the chief executive of the energy think tank Rocky Mountain Institute, who attended a Sunday cocktail party for the executives. “I think they are struggling to reconcile in their minds what that means for their industry.”

Oil companies aren’t facing only questioning from protesters. Investors are pressing them to transition more quickly to renewables, and some are divesting from oil and gas altogether.

Fossil fuel companies face lawsuits seeking billions of dollars in compensation for the damage caused by climate change. Even the pope has weighed in, warning oil executives that energy use should not “destroy civilization.” The recent attack on Saudi Arabia’s largest oil refinery has underscored the vulnerability of oil and gas to geopolitical shocks.

At the historic Morgan Library in New York City on Monday, the 13 oil companies announced an investment of “multibillion dollars” in carbon capture technologies, while declining to be more specific. The idea behind this technology is to capture the carbon dioxide produced when burning fossil fuels. Carbon dioxide is a major contributor to global warming because when it is in the atmosphere it helps trap the sun’s light.

“Our industry has gone through transitions over the decades. I don’t see it as a threat. It’s an evolution,” said Darren Woods, the Exxon chief executive. “We know from past experience that evolution is typically driven by technology,” he said.

In practice, however, major questions remain about scale, cost, speed and energy requirements of the technology. In a report last year, the European Academies Science Advisory Council said carbon removal offered only “limited realistic potential” to have a climate impact, and its authors argued that the world should not count on removal technologies to make up for a failure to reduce or eliminate emissions in the first place.

Oil companies have also made a concerted effort to plug methane leaks. Methane is a far more potent greenhouse gas than carbon dioxide in the short term. But there are concerns that methane emissions are far larger than official estimates. Leaks undermine the energy industry’s argument that the burning of natural gas should be encouraged because it is cleaner than coal and can serve as a “bridge fuel” between fossil fuels and renewable energy.

Equinor might be among the closest to making an energy transformation. In recent months it has won contracts to two of the biggest wind power projects in the world — one off the shores of New York, the other in the North Sea. By 2030, it says, as much as 20 percent of its capital spending will be in renewables.

At the same time, though, Equinor intends to keep drilling for oil.

“I think young people see that we are moving far too slowly to addressing climate change,” Saetre, the company’s chief executive, said. But while renewables and carbon capture are necessary, he said, “We’re going to need oil and gas for a long time. It has to be developed. We need to find more oil and gas.”