Anthony Levandowski, one of the most sought-after technologists, is charged with 33 counts of theft and attempted theft of trade secrets from Google 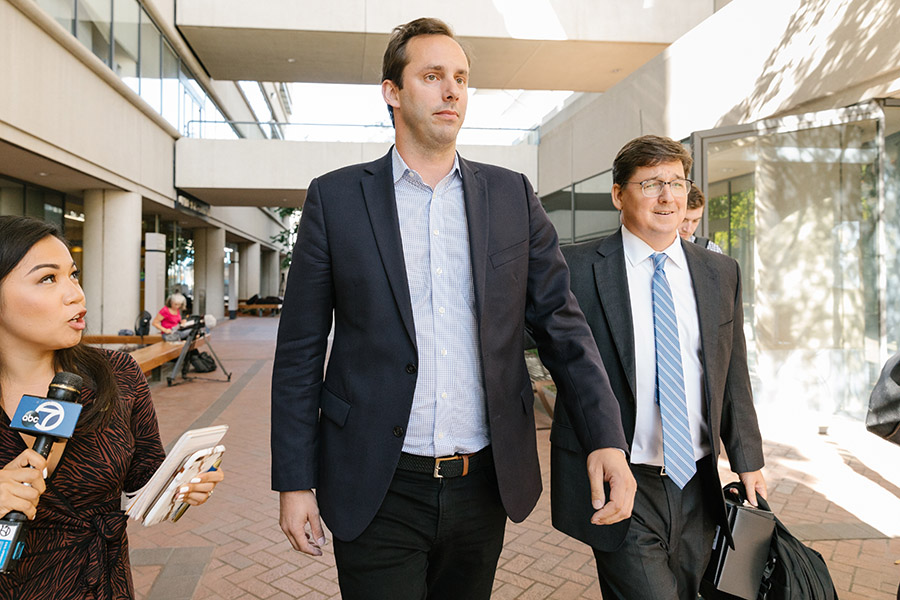 SAN JOSE, Calif. — Anthony Levandowski was once one of Silicon Valley’s most sought-after technologists.

As a pioneer of self-driving car technology, he became a confidant of Larry Page, a co-founder of Google, and helped develop the search giant’s autonomous vehicles. Uber wooed him to gain an edge in self-driving techniques. Venture capitalists threw their money at him.

But Tuesday, Levandowski, 39, fell far from that favored stature. Federal prosecutors charged him with 33 counts of theft and attempted theft of trade secrets from Google. At an arraignment in a federal courthouse in San Jose, California, a disheveled Levandowski, dressed in a blue blazer and dark brown pants and accompanied by his parents, posted $2 million bail and was ordered to wear an ankle monitor after prosecutors argued that he was a flight risk.

The criminal indictment against Levandowski from the U.S. Attorney’s Office for the Northern District of California opens a new chapter in a legal battle that has embroiled Google, its self-driving car spinoff Waymo and its rival Uber in the high-stakes contest over autonomous vehicles. The case also highlights Silicon Valley’s no-holds-barred culture, where gaining an edge in new technologies versus competitors can be paramount

It is not uncommon for tech companies, which fiercely guard their intellectual property, to sue former employees or the firms they join after they leave. But criminal charges against a senior executive for theft is unusual.

“There have always been disputes between companies — and they have often defined the Valley,” said Margaret O’Mara, a professor at the University of Washington and author of the new book “The Code: Silicon Valley and the Remaking of America.” “But this is an extreme example. When criminal charges were brought in the past, it has involved pretty large-scale hardware theft operations as well as concern that technology was being shared with foreign adversaries.”

According to the indictment, Levandowski downloaded more than 14,000 files containing critical information about Google’s autonomous-vehicle research before leaving the company in 2016. He then made an unauthorized transfer of the files to his personal laptop, the indictment said. Levandowski joined Uber later that year when the ride-hailing firm bought his new self-driving trucking startup, which was called Otto.

Some of the files that Levandowski took from Google included private schematics for proprietary circuit boards and designs for light sensor technology, known as Lidar, which are used in self-driving cars, according to the indictment.

“The Bay Area has the best and brightest engineers, and they take big risks,” John Bennett, the FBI special agent in charge of the San Francisco Division, said at a news conference Tuesday. “But Silicon Valley is not the Wild West. The fast-paced and competitive environment does not mean federal laws do not apply.” 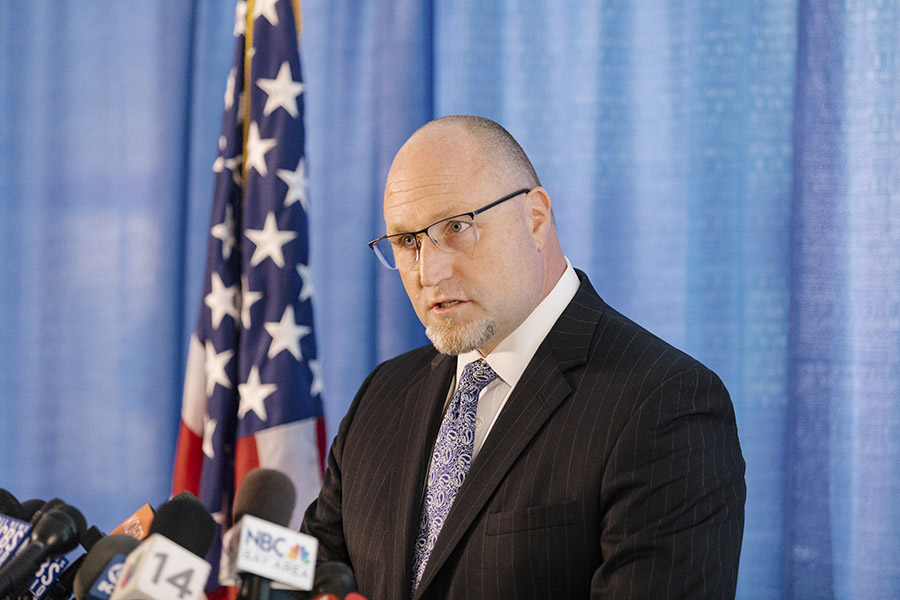 The U.S. attorney’s office said the indictment was returned by a federal grand jury Aug. 15 and unsealed Tuesday. Levandowski turned himself in at the federal courthouse in San Jose on Tuesday morning. At his arraignment, he pleaded not guilty to all charges. After he put up $300,000 and his parents and a friend posted their houses as collateral for bail, he was allowed to leave.

Levandowski’s next court date is Sept. 4. If he is convicted, he could face a maximum of 10 years in prison, a $250,000 fine for every count and additional restitution.

“All of us are free to move from job to job,” said David L. Anderson, U.S. attorney in the Northern District of California. “What we cannot do is stuff our pockets on the way out the door.”

One of Levandowski’s lawyers, Miles Erlich, said outside the courthouse, “For more than a decade, Anthony Levandowski has been an industry leading innovator in the field of self-driving car and truck technology. And the evidence in this case is going to show conclusively that Anthony did not steal anything. Not from Google, not from anyone. Period.”

Uber said in a statement that the company “has cooperated with the government throughout their investigation and will continue to do so.”

Suzanne Philion, a spokeswoman for Waymo, said it had “always believed competition should be fueled by innovation, and we appreciate the work of the U.S. Attorney’s Office and the FBI on this case.”

The indictment follows a settlement between Waymo and Uber in a trade secrets case. In February 2017, Waymo had accused the ride-hailing firm, Levandowski and others of stealing self-driving car technology. That case went to trial in San Francisco in February 2018, riveting the tech industry with testimony about the inner workings of technology companies, rivalries among billionaire tech entrepreneurs and the cutthroat competition for engineering talent.

Four days into the trial, Uber and Waymo settled, with Uber agreeing to provide 0.34% of its stock to Alphabet, the parent company of Waymo and Google. But Levandowski’s situation was not resolved by the settlement. The federal judge in the case referred it to the U.S. attorney’s office for a possible criminal inquiry into Levandowski’s behavior.

Levandowski became known for self-driving technology as a graduate student at the University of California, Berkeley. In 2004, he designed a self-driving motorcycle that was entered in the Pentagon’s first contest for autonomous vehicles.

At Google, which Levandowski joined last decade, he ended up leading many aspects of the self-driving program inside the company’s clandestine “Google X” division. Google’s self-driving car unit was later spun off into Waymo.

In 2016, Levandowski left Google to form Otto, a self-driving trucking startup. He took a small army of Google engineers along with him. Otto was quickly acquired by Uber for nearly $700 million. The deal was driven by Travis Kalanick, Uber’s chief executive at the time, who had a vision of building a fleet of self-driving robotaxis that would replace Uber’s hundreds of thousands of human drivers. 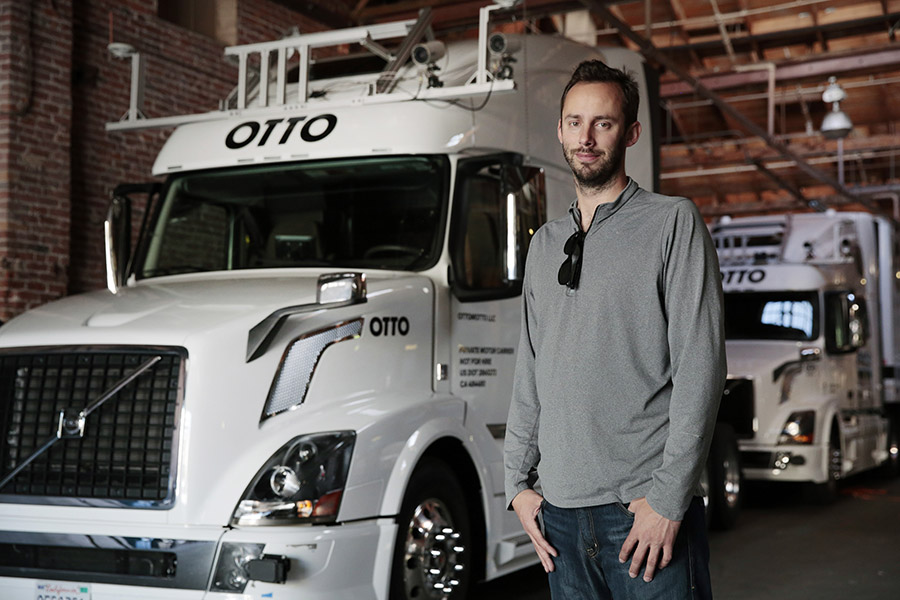 FILE — Anthony Levandowski, a former Google engineer and co-founder of the self-driving truck company Otto, in San Francisco, May 16, 2016. Levandowski was charged by federal prosecutors on Aug. 27, 2019 with 33 counts of theft and attempted theft of trade secrets from Google. (Ramin Rahimian/The New York Times)

In 2017, Waymo sued Uber, Levandowski and Otto for theft of trade secrets.

“Otto and Uber have taken Waymo’s intellectual property so that they could avoid incurring the risk, time and expense of independently developing their own technology,” Waymo said in its suit.

The relationship between Uber and Levandowski quickly went south. In the Waymo case, Levandowski invoked his Fifth Amendment right to avoid self-incrimination because, his lawyers said, there was “potential for criminal action.” He was terminated by Uber in May 2017.

Levandowski, who made millions of dollars from his work and through sales of his startups, has not stepped back. In December, he gave an interview to The Guardian about his new self-driving startup, Pronto.AI, in which he claimed that he built a car that had driven from San Francisco to New York without human intervention.

In a post on Medium at the time, Levandowski criticized the state of the self-driving industry. He also said he had been “painted into a villainous caricature” and was “super excited to be back.”

Pronto.AI said in a statement Tuesday that its technology did not rely on Lidar. It added that Robbie Miller, Pronto’s chief safety officer, would take over as its chief executive.